I was underwhelmed with the street performance on my Death Trap 2000 road bike build with the BBSHD. The next build I did was my insanely obese tired Phat Phuk which was perfectly representative of America’s Fat Epidemic. The Phat Phuk did remarkably well even with the bad joke that is the 46T steel chainring that Bafang ships with it (don’t worry better chainrings and adapters are on the way). The large wheel diameter of a fat bike and a monster 46T chain wheel assures that you’re always riding in the woods on your main granny gear or one gear down from it if you won’t want to deal with listening to the chain rub on the tire. 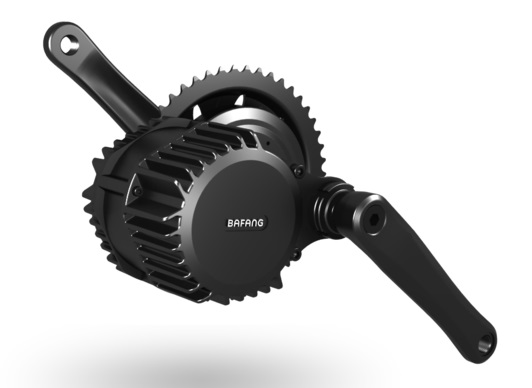 I was honestly astounded at how well the BBSHD performed in the woods on a fat tire bike. There was tons of torque even at the lower pedaling RPM ranges. The BBSHD unit did not even come close to overheating no matter how hard I thrashed on it. These experiences were with the default factory programming with the PAS disabled. It was a totally different experience than what I expected. I thought I would go one step farther and take my reprogrammed unit and install it on my XC bike My Little Bronie. The first time I took My Little Bronie out on the trails I was left with the overwhelming feeling of …

“So this is why they all hate us so much.”

The BBSHD on a smaller 26-inch wheel with a 2″ tire on it felt totally out of control. There was way more torque than the BBS02 and instead of stalling out the motor under high loads the tendency was for the back tire to spin out. There was just too much power and nowhere near enough traction. I would argue that the BBS02 750W really does not appreciably damage the trails any more than a normal mountain bike. With the BBSHD that would be a hard argument to make, especially if you reprogram the controller and ride it on a skinny tired mountain bike.

The stock programming with the BBSHD gives you a very smooth throttle response, something that always really seemed to elude the BBS02 controller. Once you reprogram the controller you lose a lot of the smooth throttle response, but you do get a lot more of the insane wheelie popping adrenaline of what you loved so much with the reprogrammed BBS02. The biggest change is the setting Throttle Mode which comes from the factory with the Current setting but has much more torque on the Speed setting especially if you lie about the size of your wheel and set it too small. The BBSHD by contrast ramps up power more slowly but it just keeps coming and coming as your bike goes faster and faster. 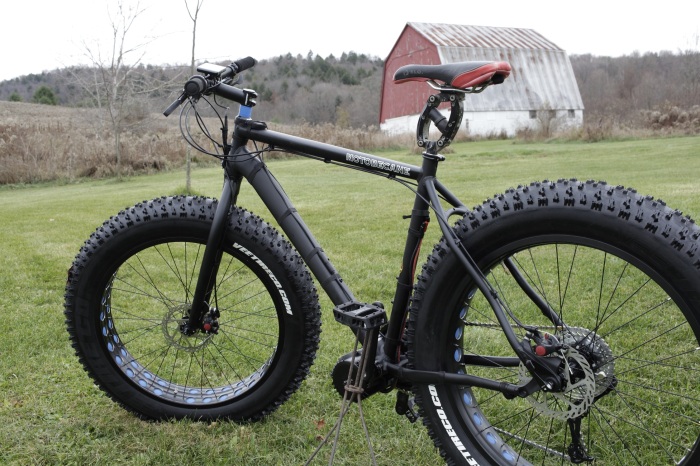 I have had zero chain derailment issues with my Phat Phuk. Knock on wood. My Little Bronie was a different story.

Although I had zero chain problems with the steel chainring on the Phat Phuk, I had nothing but problems with My Little Bronie. The steel chainring fell off about once every 3 minutes and after about 20 minutes of riding and 8 derailments I just gave up. The chain always came off when it wasn’t under load and I was just coasting over really gnarly stuff without the throttle or pedaling. I have no idea if the chain derailment issues were because the chain was too long, improper or bent derailer, the programming of the controller or the way the full susp bike changes the length of the chainline when you’re going over really bumpy knarly stuff. All I know is that the bike worked just fine with the 750W BBS02 and Lekkie Bling-Ring chainring that was on it right before I mounted the BBSHD. I will test it more and see if I can figure out what the problem is, but I suspect that a narrow\wide chainring will fix whatever problem that I’m having with that build.

The BBSHD on a skinny tire with custom programming felt totally out of control in the woods. The back tire was spinning all over the place on wet leaves and roots and I had a hard time just getting the bike pointed in the direction I wanted to go. With the BBS02 I always felt like I was actually mountain biking, but with the BBSHD it blurred the line between mountain biking and ultra-light motocross. The smooth power delivery across the entire RPM range felt much more like a gas motor than the BBS02 which has a pretty narrow RPM range where maximum power is delivered. The means that you can still eek out power if you are in too high of a gear and your pedalling cadence was too low which was a recipe for fried controllers on the BBS02.

I was surprised to find that the 68mm unit easily fits on 73mm BB with a few washers. Bafang has a 68mm BBSHD and a 73mm BBSHD which seems pretty silly to me since they could get away with only having one. Very strange indeed.

If you have a Bikes Direct Lurch you will need to get the 120mm BB BBSHD because the chainstays intrude way out into the secondary reduction gearing. The BB is 100mm but the 100mm BBSHD kit will not fit. 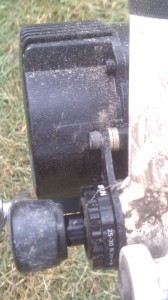 I also broke down and took the grinder to my BBT-9 Park tool so it would work properly to be able to tighten the final lock nut on the non-drive side of the unit. You can buy this tool on ebay for around $10 and is a necessary addition to your rusty bunch of bike tools.

That is a great question and one that each person will have to answer for ourselves. As the drive units get more and more powerful and cheaper each rider will have to decide what level of trail abuse they want to participate in. I feel totally confident that the BBS02 750W unit does not create more trail wear and tear than a normal bike. With a souped-up BBSHD it is simply impossible to honestly make that same assessment. If you stick with the factory programming it seems like the tire does not spin out anywhere near as bad, but it still goes much faster than the BBS02. You start running into risks of biker collisions if you’re going up a hill at 20mph and someone else is cruising down a hill at 20 mph it is unlikely that there will not be some risk of collision, even if both people are not texting while biking. If we don’t self-police when it comes to the power and size of the motors we use on singletrack, everyone is gonna get banned (just like Moab).

In the wintertime when I’m riding on snow all bets are off and I’ll happily take out the 1000W BBSHD as snow has an insatiable appetite for watts. The extra power on powder will not cause trail damage and erosion and there is never anyone else riding in the woods anyway in the wintertime, just XC skiers. When it comes to singletrack in the summer I think I’ll stick with my 4 lb lighter and just as powerful BBS02, or even better yet I’ll take out my non-motorized 20lb trail bike which honestly I prefer to ride over all my other e-bikes. Yup I know it, I’m a traitor. Every rider will have to make this decision on their own, but I hope you will make a choice that will be socially responsible and take others into consideration.

With ebikes you are always riding alone because no one else can keep up, but it doesn’t mean that what you do doesn’t affect other people or access issues for everyone. Ride responsibly and it won’t get ruined for everyone.

13 thoughts on “This Is Why They Hate Us : BBSHD 1000W Singletrack Testing”