I’ve bought a lot of battery packs from Lunacycle over the last year but none that have impressed me as much as the Samsung 21Ah 48v 30Q pack available here for $739 + $40 shipping. This pack is unusual mostly in the way that the cells are stacked into a long skinny rectangle that measures a scant  3.25″ x 3.75″ x 14″ which is a very unusual format for an ebike pack. Many of the higher Ah batteries are stacked in much larger blocks making them harder to carry and harder to mount on your bike. In my opinion, the long skinny packs are ideal for mounting to an ebike using a triangle bag, a small top-tube frame bag or just throwing into a backpack.

The 30q high power pack is an amazing brick of technology

Normally I avoid 48v packs and stick to 52v packs due to the fact that the BBSxx units tend to get pretty anemic feeling when the voltage drops below 45v. On a 52v pack that will never really happen, but on a 48v pack, 48v is the nominal voltage meaning that it can get pretty low before the BMS cuts out. The 21Ah pack had loads of juice even when only charged to 90% with a Lunagizer and it barely even got warm even when running at 40amps continuously. On average I get about 2.5 hours of hard riding in the woods with this pack before it starts to die when it is charged to 90% capacity if there is little or no snow. When there is heavy wet snow that number can easily dip down to about 90 minutes or so as deep powder has an insatiable appetite for watts. 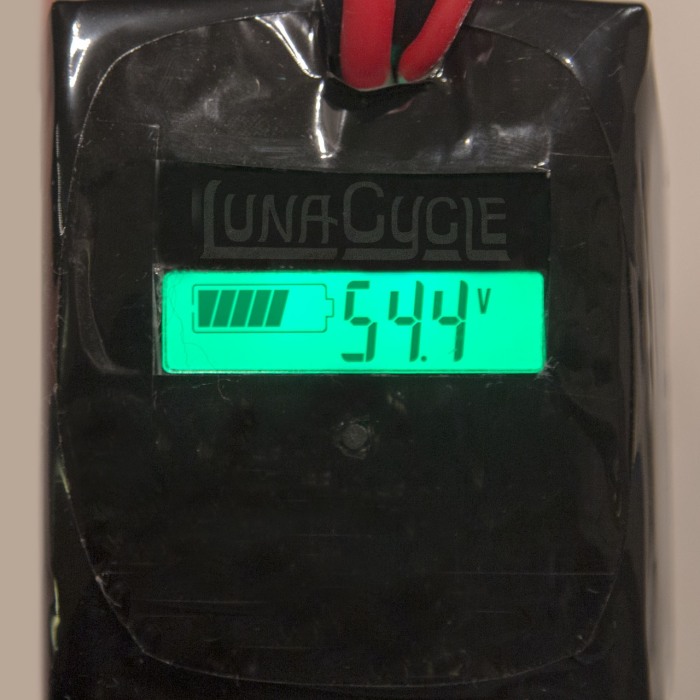 The built in watt meter is a nice add-on that is getting way more common. I recommend that you shock & waterproof this battery before you use it.

90% of the testing with this battery was done on my Phat Phuk build with a BBSHD 1000W mid drive. Even when running this ebike through 5 inches of wet sloppy snow the battery barely got warm. The BBSHD 1000W only draws 30Amps of power and the 13S7P Samsung pack means that each cell is only drawing around 4.3 Amps. The 30q battery is one of a new 18650 cells that can produce a lot of amps and have a lot of range. There are few other 3000Mah batteries on the market right now that can reliably put out 15 Amps without damaging the battery or seriously shortening its life. The 30q is similar to the 25R as far as how cool it stays under high loads, but closer to the 29E when it comes to range. In short the 30Q battery is a  real game changer. 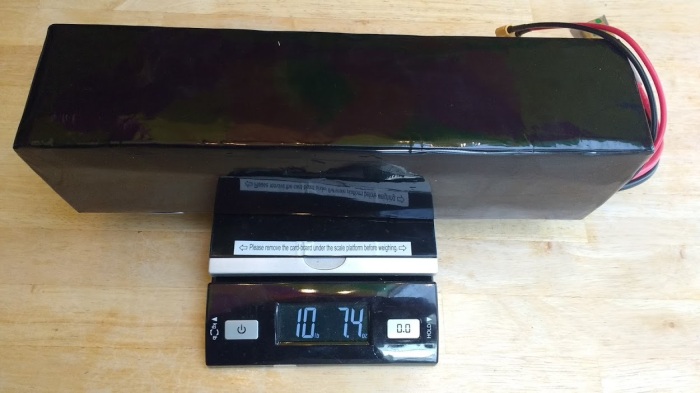 At 10lbs 7.4oz this battery is incredibly lightweight for its insane 21Ah range

The high power BMS on this battery will put out 50 Amps Cont and 70 Amps burst, or about 3500W. I tested it with the 3000W cyclone kit on singletrack and it didn’t even get warm. The stock controller with the cyclone only pulls about 40 Amps which is close to 2000W, well within the range of the 30Q pack. The individual cells are still drawing less than 6 amps at that power level which does not even scratch the surface of what they are capable of. The motor Cyclone does not even get warm at 48v even on steep hills and it begs for more voltage. Lunacycle has some new 60v packs that have just been introduced and there are 72v packs coming in the not-to-distant future. This is what builders are demanding and this is what Eric is having made.

So is it crazy to buy a battery where the BMS power limits do not even come close to the power output abilities of the cells? At peak power, this pack can draw 70amps which is about 10 amps per cell, although that can vary a little bit. It’s always a contest between the power of the BMS and the power capabilities of the battery. If you want your pack to last and you’re pushing it into the max amps that the cells are capable of on a regular basis then something is going to give. It is much better in my opinion to use batteries that can take more power than what you want to draw from them so they don’t really get hot in the first place. The 25R cells can take a whopping 100 amps of power for short bursts, and the 25R cells are several years old now and are getting very cheap. The 30Q gives you 20% more range per cell at a premium cost, but it also means that you save 20% off the weight of your pack for the same range. Every builder will have to decide for themselves whether or not the tradeoff is worth it.

The construction of the Lunacycle packs is top-notch. Please, don’t try this at home kids.

I’ve also been tearing apart a 48v 20Ah Lunacycle triangle pack to repair it (future article) and I have to admit I’m really impressed at the build quality and workmanship of these packs. Everything about them is top notch, a far cry from the crappy Chinese packs I have gotten from non-reputable resellers. Although I didn’t tear apart this 30q pack, I expect that the build quality is as high as the other triangle pack I’m repairing.

I like my battery packs like I like my women … tall and skinny. A tall thin profile is the most effective shape for shedding heat (At 6′ 10″ and skinny as a rail I’m just always cold). When you have a thick giant brick of Lithium cells the built-up heat can get trapped in the center and have a hard time working its way to the outside. These Lunacycle packs are not glued together like many 18650 packs are made in China, but rather have small plastic lego like pieces that click together. This adds a lot of strength and durability to the pack, but also allow it to cool much better than a hot glued pack. The Bosch battery pack also shuts off at 32 degrees F, but the other day I was out riding in negative 10 degrees F, a full 40 degrees colder than the Bosch battery shutoff. That evening it got down to a whopping -29 degrees F, although generally -20 is where I draw the line. When riding in extreme cold, I strongly recommend that you keep your electric fat bike and your battery inside until you are ready to ride. If you don’t start out with everything warm, you’re going to have a lot of problems. Grease doesn’t really work right at those temps and water in the bearings and chain can make everything lock up. Your lithium battery can have its capacity cut in half when it gets that cold.

The pack that this battery replaces in my collection is a 25lb 52v 16S 25Ah LifePo4 that takes up almost 3 times as much volume as this pack and only does 30 Amps cont. When I look at these packs side by side I am absolutely astounded at how much better the 30q pack is, 16% less total power storage, but it weighs 60% less with almost double the continuous amps output for a 25% increase in cost. The 18650 ebike battery market is really improving by leaps and bounds.

If you’re looking for a pack to run all day long at 2500W without excessive buildup and a built-in voltage display, then this pack might be the one for you. This pack can do 3500W for short bursts, however if you want to run it at over 2500W on a regular basis then you should buy something with a bigger BMS or higher voltage.

There is going to be a mass exodus away from the sketchy Hobby King lipos in the builder community as they start to embrace the newer high power\high energy density 18650 cells that are taking over the ebike battery market. In the long run, we’ll all be better off for it.