Not even a year ago I would throw my huge 12Ah 16lb LifePo4 Prismatic battery in my backpack and head out to ride in the woods for an hour or two. Although I had experimented with the ultra-light Hobby King Lipo’s they simply had too many downsides to feel safe strapping one on my back to go riding in the woods. Over the last few years, the 18650 cells have improved dramatically to the point where, in my opinion, it is really the only kind of packs you would want to consider for an ebike. 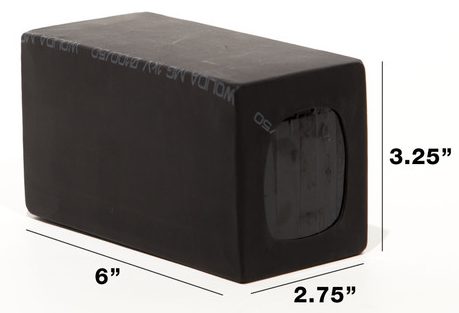 The Luna Mighty Mini Cube is unlike anything else you will find on the ebike battery market today.

Many months ago I was lamenting to Eric from Lunacycle about how he should build a small ‘spare tank’ battery for ebikes. This battery would have around 5Ah of range or so and would be small enough to keep in your pocket for when your main pack died. This project was already well underway in the Lunacycle skunkworks and after many months of testing the packs are finally here. These packs are currently sold in three different configurations.

I have to say it’s an amazing feeling to just throw one of these batteries in your backpack and go for a ride without even being able to feel the weight of the battery at all. I tested the 30Q pack pretty extensively on singletrack and I have to say that this pack surpassed my every expectation. Before these Mighty Mini 2P packs came out your only option for using a 2P pack was to rewire a power tool battery pack or make your own out of higher power cells like the 25R. The new 18650 cells for 2016 can provide BOTH high power AND high-capacity allowing these new 2P packs to arrive and impress us all with their power capacity and peak output ability.

Is that an ebike battery in your pocket, or are you just happy to see me? I wear socks so that other people aren’t tortured by looking at my toes.

I bought one of these batteries as soon as it hit the market and anxiously waited for it to arrive. The shipping cost was only $30 (most of the bigger batteries have a fixed shipping cost of $40) and when it arrived I charged it to full capacity using my 52v Lunagizer charger which is the only charger I recommend other than the Cycle Satiator. I decided that I would see how long it lasted with a BBS02 using PAS only at power level 2. For my first ride after about 40 minutes the battery still seemed to have plenty of juice in it and it wasn’t even warm yet so I laid on the throttle. After about 10 more minutes of riding at full throttle, the battery had gotten warm, but the Mighty Mini cube still had a charge and was still putting out plenty of power. This is one of my favorite parts of using 52v 14S batteries on drive systems like the BBS02 and BBSHD which were designed for only 48v systems. The 52v systems run the drive unit at nearly full power even when they are close to dying. With a 48v 13S pack once it gets near the end of its charge the battery starts feeling really anemic.

The Mighty Mini Cube weighs in at only about 3.3 lbs

I tested the Mighty Mini in my pocket, but it was pretty uncomfortable, it felt like I was carrying around a small brick. The best setup I found for this battery was dangling from under the seat using a Saddle Bag Scrotal Sack. The battery fit nicely and since it was dangling down it didn’t hit against the bottom of the seat or seat tube. As an added bonus this is one of the stealthiest places to store your battery as no one is going to look under your ass when they ride by you, nor are they going to suspect that your battery is so tiny that it will fit in a saddle bag sack.

One of the biggest barriers for people getting into the ebike market is the cost of the battery system. When I’m commuting on the road with a BBS02 and a 52v battery I get about 1.5 miles per amp hour at the highest level of pedal assist with a 52T front ring. This means that most people can average about 25mph on their ebike and with the PF pack should be able to go over 10 miles per charge with a $229 battery that weighs in at only 3.3 lbs. What we are seeing here is nothing short of revolutionary as the price\weight\performance characteristics of ebikes are now breaking into what normal consumers (not just enthusiasts) are willing to accept. While I didn’t think much about strapping a 16lb battery to my back to go riding in the woods for an hour or two, most normal people would think I am totally insane. Let’s face it, backpack batteries suck.

A cheap way to hide your battery somewhere people are not likely to look, under your bum.

A note about power and heat. I have found that when I run the BBS02 with PAS at power level 9 it hovers between 15 and 20Amps of power. If you have a BBS02 and want to use the throttle then the only 2P pack you should even consider getting is the 30Q. If you are happy using PAS only then the GA or PF packs should be fine. If you have a BBSHD then the only pack that I recommend you consider getting is the 30Q pack, as the GA and PF packs will overheat if you run the BBSHD at the higher power levels or lean on the throttle. Although I really like the GA cells (52v GA Shark pack review is coming soon) they do tend to get pretty hot at high-current draw, at least hot enough so that it makes me pretty nervous. If your hub motored ebike has a controller that is between 20 and 30Amps then I would go for a 30Q pack only. If your controller is 20 Amps or less then the GA or the PF packs will both work well, just pick the most expensive pack that you can’t afford. That is what other people’s credit cards are for.

Remember that most but not all 48v ebike controllers can run with 52v packs. The best way to test to see if yours will work is to plug someone elses 52v battery fresh off the charger to your controller and see if it works of if there is a high voltage cutoff. If there is no high voltage cutoff then it will probably work, although it will certainly void any warranty you have and you could fry your controller. You only live once.

Just make sure that the bike seat pack will fit your battery before you buy it.

If you’re looking for an ultralight battery pack for single-track riding in the woods, banging around town in, or as a spare tank of juice for when your main battery dies, then look no further than the Luna Mighty Mini 3.3lb 52v 14S2P Cube. There is nothing else like it on the market and I can say that this pack delivers on all the promises that it makes for weight, performance, and fun.

41 thoughts on “The Most Power You’ll Ever Be Able To Fit In Your Pocket : 6Ah 3.3 lb 30Q Luna Mighty Mini Cube Pack Reviewed”