When I first got started in the ebike thing, what I really wanted was a tiny 7lb battery that I could throw in a backpack and ride for 90 minutes in the woods with. After a lot of experimentation what I ended up with was a 16lb battery that I kept in my backpack that would generally last me for about and hour of riding. My 20Ah Prismatic Cell LifePo4 pack quickly degraded from 20Ah down to 12Ah of capacity, and I have a strong suspicion that it was made out of recycled Nissan Leaf cells. The pack was incredibly cheap at $500 through ebay and it was shipped illegally to me, not as hazmat goods like it should have been. After the charger exploded in my house I made a decision that I would not buy any more cheap ebay batteries. 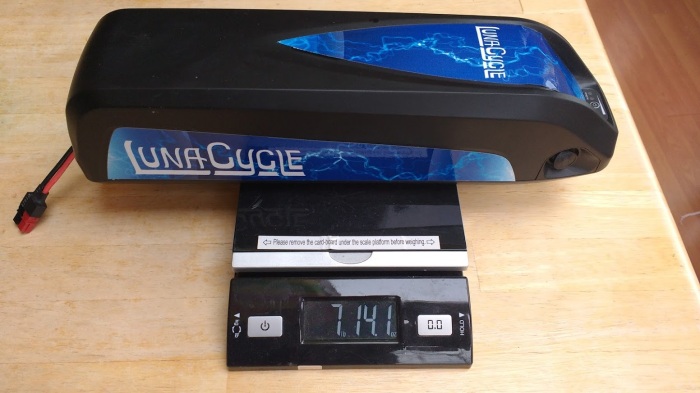 Where have you been all my life? The NCR18650GA pack is the best pack I’ve ever owned to date and works great paired with the 30Amp BBSHD

Because I wanted the lightest batteries I could get away with I experimented with both Lipos and LifePo4 Pouch cells from Hobby King. The cells got so hot I was worried about them starting on fire at power rates that were far below the batteries rated C-rates. The packs quickly puffed up and I didn’t feel comfortable strapping puffed packs to my back and riding around in the woods with. Over the past year, the battery technology has steadily improved to the point to where I feel like the 18650 cell technology has reached a point where you would be crazy to consider using anything else.

The 13.5Ah NCRb pack I bought about 6 months ago from Lunacycle.com for $435 right here was reviewed as the “best pack I ever owned“. The only problem with the NCRb pack is that with a 4P configuration it simply would get too hot for my comfort zone when run at high power with a 30Amp BBSHD drive unit. This battery works very well with the 25Amp BBS02 and I have been running it about 2-3 times a week for the last several months without any issues in this configuration. The NCRb pack BMS would get a little finicky when it was thrown in a backpack, mostly because it didn’t like the spark that would form when I hooked up the Anderson PP connectors. I opted to mount it on my N380 equipped Deadeye “Duh Banana Bike” build and I have no issues when the battery is mounted on a frame like it was designed to be. For whatever reason the GA shark pack does not have the same issues with the NCRb pack and it seems to be perfectly happy to be thrown in a backpack. 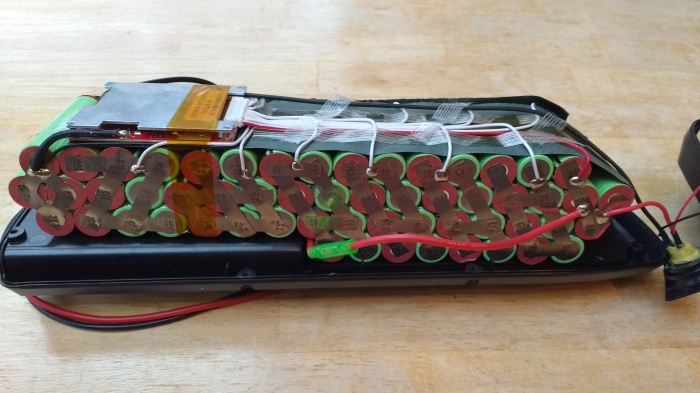 The Luna GA Shark packs are packed to capacity and they couldn’t use the 18650 frame stencils so the packs are glued together. The NCRb pack is shown, the GA pack is identical but with red cells. Red goes faster.

The NCRb and GA cells are both made with the same chemistry (NCA) and this chemistry tends to run hotter than INR chemistries. The NCA chemistry also tends to run better when the cells warm up. After an hour or so of a 7amp drain or so the pack gets noticeably warm. If this pack is mounted on the bike instead of in a backpack then it will have no problems keeping cool. I have run this pack repeatedly through 6 inches of heavy wet powder for over an hour with the pack wrapped in a Thermarest pad and stuffed in a backpack and it has not gotten hot enough to trigger the BMS thermal shutoff. The Sanyo\Panasonic NCR18650GA cells are rated at 10Amps continuous discharge and there is some speculation that it could be even better than that. When I run the GA pack with full throttle for extended periods of time the pack does get pretty warm, but I have yet to hit the thermal shutoff for the BMS. Be aware that if the outside of the pack is hot, the batteries are about 10 degrees hotter. Your shark pack should never too hot to hold in your hand, if it does then something is seriously wrong.

My only complaint about this pack is that it can only provide 30Amps continuous. Unfortudently, there are no 50Amp Cont BMS’s that are small enough to be able to squeeze into this shark pack, so if you need more power than 30 Amps you will have to pick a bigger soft pack battery with a high power BMS. What is happening right now with ebike packs is that as the cells get more powerful and have longer range people keep wanting better and better packs that provide a lot more power, are much smaller and have a longer range. With the 2016 cells being so much better than the cells of yesterday I can say that there seems to be no end in sight. 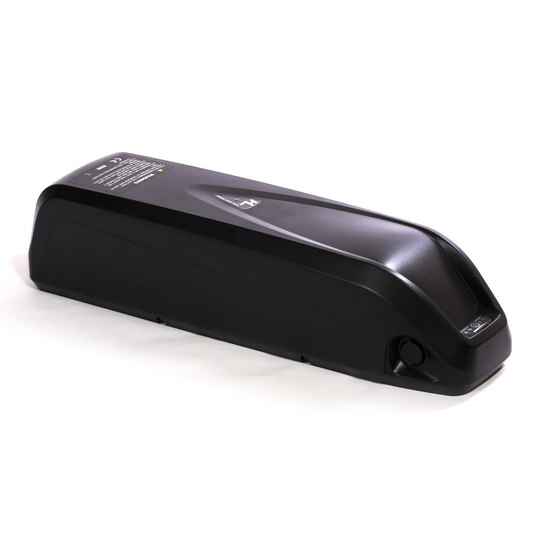 I’ve also discovered that you can mount the shark pack in locations where the screw holes do not line up. The bottom half of the shark pack bracket is an area designed to house a 6FET ebike controller. It has a metal heatsink and you can easily take apart the mounting bracket and just drill a large hole through the plastic about where you need it and then drill a smaller hole through the metal and then use your water bottle holder bolts to through the metal plate to hold it more securely to the frame. 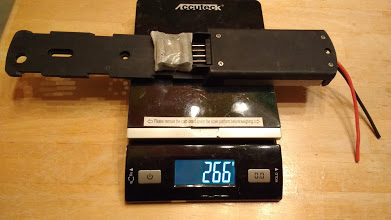 So what was my final verdict on the 13.5Ah GA shark pack? I was able to get over 14Ah of power on a 13.5Ah rated pack with hard riding which almost never happens. The pack got warmer than I expected, but it also was not plagued by the annoying spark detecting shutoff that my NCRb pack has had twice. If I had mounted the NCRb pack on my frame from the get-go and used it the way it was designed to be used then I would not have had those issues, but the GA pack does not seem to have the finicky spark detecting shut off that the NCRb pack did. In short the GA pack is everything I’ve ever wanted in a pack, high power, long range, works well with the BBSHD without overheating and it is really insanely inexpensive at only $545 (without a charger) right here. I wish this pack was available 2 years ago, it would have saved me a lot of money and headaches. 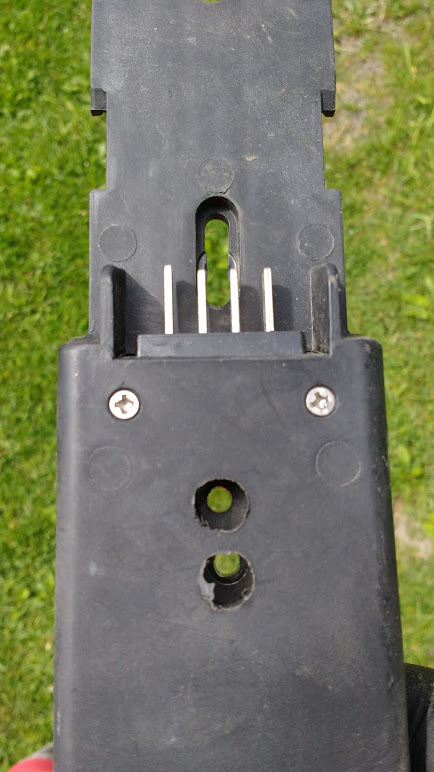 Can’t fit the bracket on your bike? Drill baby, drill. Just watch out for those wires. At least I got the hole right the second time.

The Sanyo\Panasonic NCR18650GA 52v 13.5Ah 7lb Shark pack has taken over the title of “The Best Pack I’ve Ever Owned”, sorry NCRb. You have been dethroned.