One of my great pleasures in life in picking titles for my articles that are particularly obnoxious and watching the posts show up on my Google news feed. There is something incredibly subversive about writing really down to earth and ‘in your face articles’ that call it like it is. I’ve ridden about 3 dozen ‘factory’ built ebikes in the last 2 1/2 years and in all honesty they have all pretty much been total crap. I’m not going to go into why I think ebike companies are churning out these crappy, low power, hub motor ebikes but I’ll tell you right here you don’t want to plunk down your hard-earned cash just to be terribly disappointed by them in the deep snow or on the trails. When I was visiting Lunacycle’s warehouse this winter I got to try a bunch of different ebikes and the one that stood out was the KHS 3000. I bought one of the 2016 KHS 3000’s from Eric and had him ship it back to me in NY so I could build it up with a BBSHD and a Ludicrous controller and a 30T mighty mini ring. You can buy a similar configuration direct from Lunacycle with a 20Ah large triangle pack and a 50 amp Ludicrous controller for $2849 right here. Once you get the bike it takes 5 minutes with any windows PC to bump the programming up to a full 60 amps to maximize your power (will totally void your non-existent warranty). I’ve never really endorsed a ‘factory built’ ebike before, but I’d bet my favorite hamster that you will NOT be disappointed with this bike for singletrack riding and plowing through deep powder.

There was a couple things about the KHS 3000 that were quirky. The massive 180mm front rotor on my bike got bent pretty bad in shipping. That being said I was really impressed at how well Luna packed up the bike, it had much more padding than any bike I’ve ever bought from Bikes Direct. The last bike I bought from Bikes Direct (Full suspension Sniper) had tons of scratches all over the frame (they sent me a free replacement which was cool) and it was missing the lower bearings on the headset. I have to say that when you spend $1500 on a bike you expect there to be bearings in the headset, but I digress. To say the least, after buying about 14 bikes from Bikes Direct, the honeymoon is pretty much over. The thing I’m learning the hard way is that Taiwan (KHS factory) make much better bikes than mainland China does (Bike Direct). It was impressive to see how much time and effort Lunacycle put into repacking their bikes so they could get shipped without damage. That being said one of the biggest challenges that bike shops face is trying to get bikes shipped across the country without getting damaged. 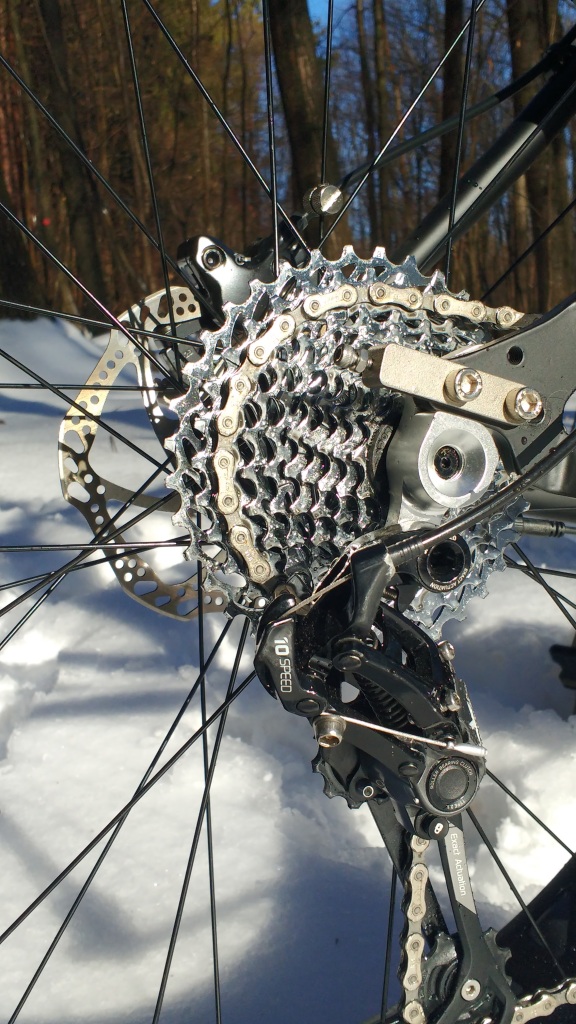 The KHS 3000 was hands down the nicest fat bike I’ve ever ridden. The 2014/2015 model of the KHS 3000 has crappier rims and tires (Vee Rubber Mission 4’s which are total junk), and BB7 cable brakes. I would not recommend the older model, as it’s not worth saving a few hundred dollars to buy a bike that you’re going to have to replace the tires on anyway. The 2016/17 model KHS 3000 has much better Snow Shoe XL 4.8 tires, really nice 100mm triangle holed rims and decent hydraulic brakes which make it well worth spending a couple hundred extra dollars up front for a much better bike.  If you’re glutton for punishment Luna still has a couple of 2014 KHS 3000’s in the Extra large size for $200 less than the newer model year available here and you’ll have to call and harass them to get a Ludicrous enabled bike ($250 extra) as it’s not listed as an option for that bike. That being said I don’t recommend using a frame pack with the Ludicrous controller as they are really only designed to run at 30 Amps continuous not the 60 the Ludicrous can deliver. A smart shopper ignores peak power BMS ratings and gets the right sized pack for the motor (like a larger 50 Amp cont soft pack).

The rear hub adjustments are smart, but like cheap hooker they can work their way loose

The hydraulic brakes tend to squeal like a toddler in a kiddie pool whenever they get wet, but they don’t freeze up on my the way my BB7 cable brakes on my other bikes tend to in the extreme cold. They also did not seem to stop working when they were wet and extremely cold which has been a reoccurring problem with me with the BB7’s. The KHS 3000 has a really nice feature in the rear where there was aluminum blocks that worked like horizontal dropouts and allowed you to move the rear wheel back and forth about 1.5cm. This would allow you to mount a IGH in the rear without a tensioner, if there was such a thing as an IGH that would work with a through hole axle that is 197mm wide. If one exists, I’ve not heard of it. These adapters allow you to center the bike tire pretty accurately within the frame which is important because the one downside I’ve found of the KHS 3000 is a lot of frame flex. My second ride out the rear lockout came undone and the bolts also loosened so keep an eye on that your first ride or three.

I liked that the hydraulic brakes had a throw adjustment, although when you push the adjustment out farther it also makes it a little harder to grab the brakes. I have big hands, so it was not much of an issue. At 6′ 10″ the 19″ frame was way too small for me and I should have held out of a 21″ inch frame instead. Leaning way over to grab the flat bar handlebars is tough on my back after about 90 minutes of riding so I bought some Sunlite Alloy 5″ riser handlebars on ebay for $26 that I plan on swapping in next week.

I spent a lot of time trying to get the ridiculously large Snow Shoe 2XL tires on the rear of this bike. The bike comes stock with the skinnier Snow Shoe XL tires, but the 2XL tires are much wider and taller and are my current favorite tire to ride. Although I could get the tires mounted and adjusted without frame rub, there was basically no real clearance with the 2XL. Once I got on the bike and started riding it, it became clear that it wasn’t going to work. This frame has more flex than any other fixed suspension fatbike frame I’ve ridden and you really need to have at least about 7mm of clearance all the way around any aftermarket tire to keep it from rubbing on the frame. The Snow Shoe 2XL fit on the front fork without a problem, but given the choice, I’d much rather have the 2XL on the rear and the XL on the front which leans the bike more aggressively forward and keeps it from wheelieing so much. 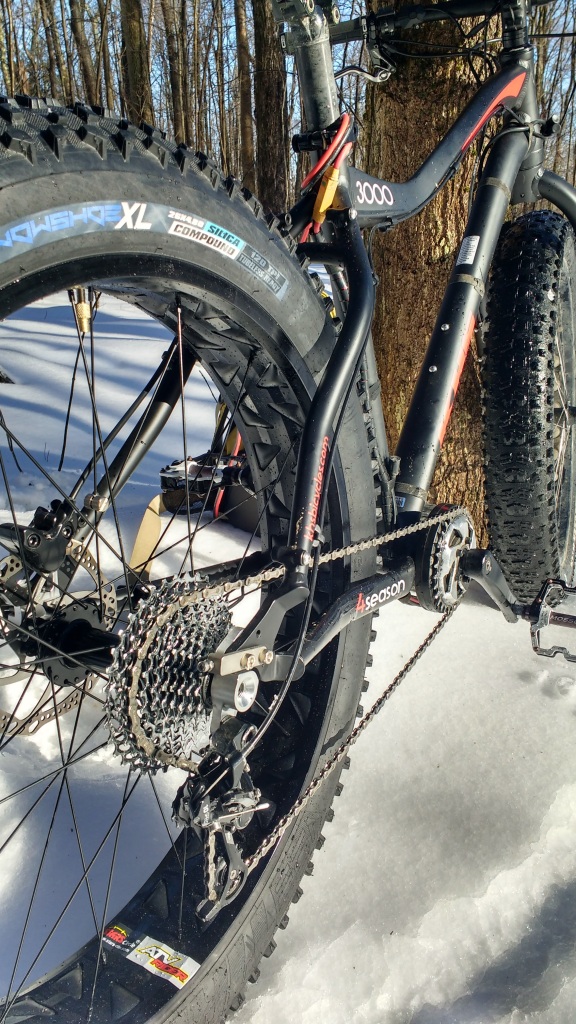 The Ludicrous 60 amp controller with a 52v battery that has a 50 amp continuous BMS is a wheelie machine. It’s stupid powerful in the lower gears and it becomes extremely difficult to keep the front wheel on the ground when you hit the throttle. I can’t tell you how much fun it is tapping the throttle on jumps and getting the whole bike airborne or hitting the throttle right before a large log or log pile and having the front wheel rear up and the bike fling itself over the obstacle. In my opinion, it would be crazy to not reprogram your Ludicrous controller for 60 amps, and you would be absolutely insane to order this ebike without the extra $250 Ludicrous controller.

Right now Lunacycle will only sell their Ludicrous controllers with a prebuilt ebike which is one of the main reasons to get this bike. Not only is it insanely fun, you’ll be enjoying twice the power of all the other suckers out there on the normal Bafang BBSHD. The BBSHD was born to run at over 50 amps and it goes from being a ‘ho-hum’ drive to a ‘holy f*cking sh!t’ motor with nothing more than a controller swap. Once you try the Ludicrous, you’ll not want to go back to anything else less powerful. Ever. 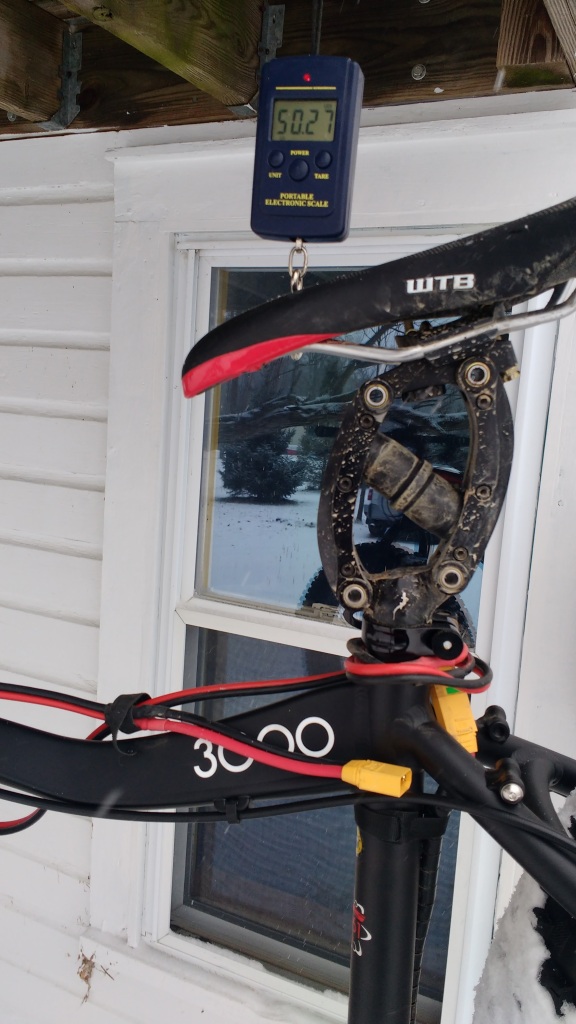 Without a battery, this bike came to 50lbs with a Thudbuster and a single Snow Shoe 2XL instead of the factory XL tire on the front