Today the planet reaches the orbital position and rotational orientation of my exit from the birth canal and out into the world (It’s my 45th birthday). As a way to celebrate being one more year closer to death, I decided to write this crazy article. I have a lot of anxiety about being alive, every day I imagine a giant LED bomb-style timer rapidly counting down to zero. I can’t see what the numbers are no matter how hard I focus, but when it hits zero I know I’ll be dead. It is this anxiety that causes me to work sucking the marrow out of life as if it were my full-time job.

A have a friend (true story), and his name is Eric Skawald. Eric has been one of my best friends for a long time and totally embodies what I want to be like 24 years from now (I’m not allowed to publish his age but I’m 45 and he’s 24 years older than me so you do the math). Eric is also old, really old, like one foot in the grave old. Currently retired, he spent many years teaching remedial English and Math skills to inmates at a maximum security prison, so you can see why we get along (they haven’t caught me yet). I have never sold any of my precious electric fat bikes because it’s a fine line between trying to promote the industry, and not doing it on my home turf and making myself a target for my non-ebiking friends. I decided to sell my Bullseye monster with a converted BBS02 to Eric last year for quite a bit less than what I paid for it.

To put it mildly that ebike purchase has completely changed his life. I’ve heard similar stories from lots of other people all over the world. 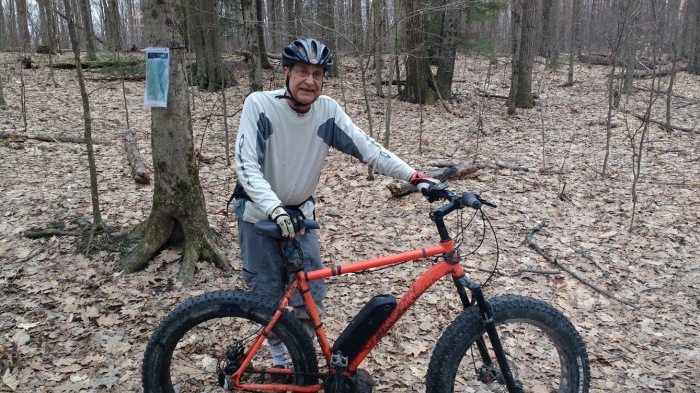 Think it’s impossible to learn how to singletrack trail ride after you retire? Think again sucker.

Eric is an amazing downhill skier, and like myself, he prefers skiing in the woods on extremely steep terrain (over 35 degrees). Back in my downhill skiing days, I used to hit the mountain with Eric and he was one of the only people who could keep up with me. That was saying a lot because he was 24 years older than me, but he skies like a hot-blooded teenager. Eric’s daughter Ella is also an amazing snowboarder and started to learn to downhill mountain bike and within a few short years was competing on a national level in downhill racing. Eric wanted to learn how to trail ride, but he knew he didn’t have a prayer of ever being able to keep up with Ella on the trails. Buying a cheap home built electric mountain bike changed all that for him and opened doors that he never thought would be possible. This article is about how you’re never too old to pick up a new sport and how an electric bike can level the playing field when riding with these young whipper snappers.

I find it a huge disservice to the elderly for ebike companies to focus their product line on the infirm and enfeebled. Although I’m sure that makes up a large portion of their market demographic, there are plenty of old people out there who want to stay young at heart. Learning to ebike on the trails even when you’re over 65 can be done, and done well. The first time Eric went out on my singletrack trails I was amazed at how well he did. I just set the BBS02 to PAS level 1 and let him go. He was a bit slow and had a hard time keeping up with me, but he didn’t wipe out that much and didn’t hit any trees with his head. The wipeouts he did have were pretty spectacular and it was worth putting up waiting for him just to witness them firsthand. Yes, I really am that kind of friend.

I want to be just like Eric when I grow up, except maybe without the Fanny Pack

After the first couple of times I decided that we were more evenly matched if I rode my normal non-electric bike and he rode the electric fat bike. Although he screams by me up the hills on power level 2, on most of the level terrain we run at about the same speed and he just sets the PAS to level 0. I can’t emphasize how awesome this really is that someone in their mid 40’s who has been biking almost every day for 10 years (that’s me) can ride along with someone in their mid 60’s who has NEVER ridden a bike on singletrack in their life. Although Eric had ridden bicycles about 10 times on the road since his teen years, before he started riding with me he had never been on singletrack before. Before I knew it he was texting me every day to go riding. It was pretty cool (except the part where I had to fix his bike for free every time it broke, which was almost every time we rode together).

Riding with Eric is so much fun, and with a motor he can actually keep up

That brings up another thing that the uninformed reader should know, under no circumstances should you EVER sell an ebike to a friend of yours. Have them buy their own ebike online so you don’t get stuck with the ‘free repairs for the life of the bike’ deal. That deal ends up sucking for the seller (but it’s really great for the buyer) and it will strain any friendship to its limit. If they don’t feel comfortable building their own ebike, then they should just buy one prebuilt, preferably with a Ludicrous controller, because 50 amps on an e-bike feels just plain awesome.

It’s not just that ebikes are the perfect tool for getting the elderly off their walkers and onto the singletrack, there are also people who are grandparents that are actually leading the direction of the entire industry. Curt Fisher from Torrence, California is one of those people. Curt has been working for Luna on many secret skunkworks projects that I can’t really talk about here and has been instrumental in their overwhelming success. He works ‘behind the scenes’ and is also one of the coolest human beings that I have ever met. My last trip out to LA he let me stay in his house and took me out surf kayaking twice along the LA coastline when it was not windy enough to kiteboard (which was every single day I was there). I have to say that the time I spent with Curt was the highlight of my trip to LA, and I enjoyed my time with him even more than thrashing on Eric’s $160,000 Audi R8 through the streets of LA or taking his custom Apocolypse 10,000W kickscooter up to a GPS verified 50mph.

Curt was the first person to mate his Lunacycle cargo bike to a 3000W Cyclone motor and run it with a 72v battery. Long story short, that setup is just plain awesome. Lunacycle decided to copy it on the factory Rhino build throwing on an even more powerful 5000W motor on that bike with a more powerful Kelly controller to mate with it (50 Amps instead of the 40 Amp stock Cyclone controller). Curt took time out of his busy schedule to ride with me together through Torrance and I got a chance to test the Rhino with a Luna Lander front suspension fork which was a setup that I enjoyed much more than I thought I would. When someone says ‘Hey let’s go trail riding and you can take my 70lb cargo bike that is throttle only’ it’s hard to get excited, but I had a really great time and didn’t even break anything even though I was riding someone else’s bike. How often does that happen? 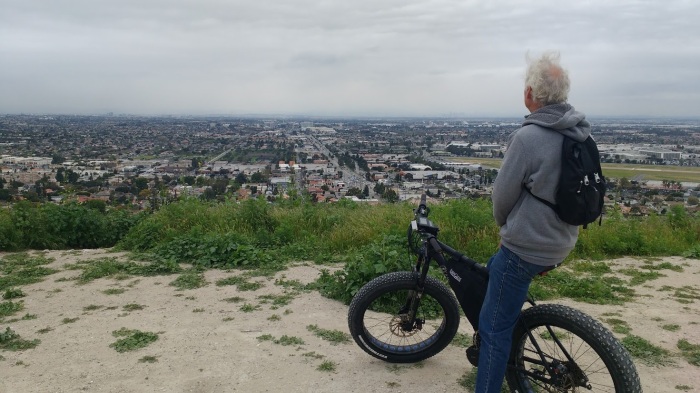 Curt is such a badass he doesn’t even wear a helmet. Helmets are for sissies. Actually, he forgot his helmet (early onset senility)

Do you know an old person who could benefit from all the positive things you get out of learning to trail ride?

I think it’s time for ebike companies to stop treating the over 60 crowd like they should all escape from the old folks home on their ebikes and start realizing that there is actually real market potential for singletrack ebikes for the grandpappy generation. Selling 350W hub motor comfort bikes to the elderly is doing them a huge disservice when they could be out shredding on the singletrack with us. I’m not making this up, I really do have a friend and he really did learn to mountain bike with an electric fatbike with almost no effort on his part whatsoever even though he was pushing 70. Now he’s totally hooked. If I can’t bike/kite/paddle when I’m 70 then frankly I don’t really want to be alive. Kill me now.

Electric biking can tie the generations together like it has with Curt and Josh Fisher. It’s a beautiful thing *sniff* *sniff*

Your parents and grandparents can get hooked too. Just get them on an ebike, point them to the trails and watch the magic happen.

Ride on Grandpa, ride on.

Disclaimer : Technically I’m a Grand-Uncle, but my own son has yet to breed. Get cracking boy.

26 thoughts on “Shred Till You’re Dead : Get Grandpa On An Ebike And Out On The Trails”