About a year ago Eric at Lunacycle decided that he really wanted to provide a quality fat tire front air suspension fork for the Sondors ebike. The problem is that every single air fork on the market uses through-hub axles and not a standard vertical dropout axle. In order to mount a through hole fork on the Sondors ebike the consumer would have to swap out the hub on the front wheel or get an entirely different wheelset. After some back and forth Eric ordered hundreds of a new air fork that he was convinced would be successful in the US market. I have to admit that the Luna Lander Fat Tire fork has exceeded my every expectation and is by far the nicest $195 air suspension fork (available here) I’ve ever ridden. Although the market is now crowded with fat tire suspension forks including Rockshox Bluto, Renegade RST, and Wren Inverted forks I have yet to test any fork that provides the Luna Lander’s level of performance at anywhere near the price. 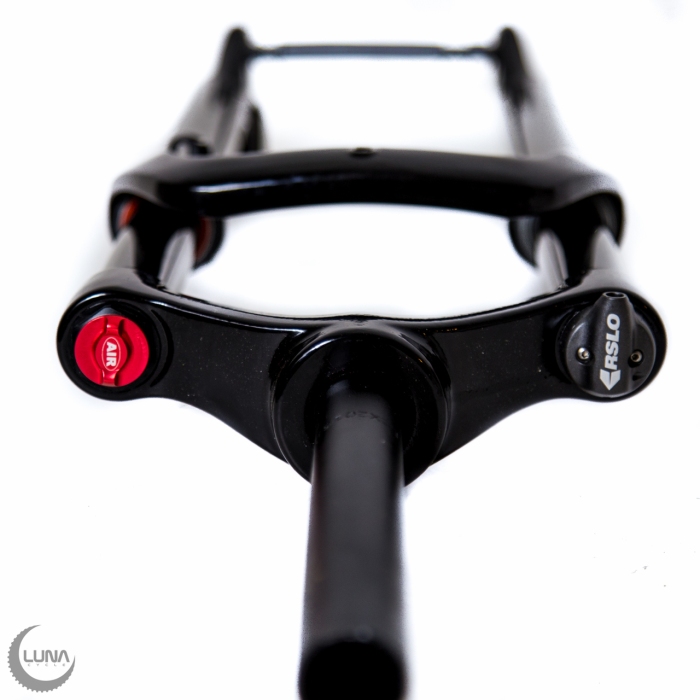 The Luna Lander fatbike fork comes with a remote lockout, vertical dropouts and accepts most fat bike tires smaller than 4.9″

I’ve been testing the Luna Lander for almost 6 months now on a variety of different ebikes. It seems to fit most of the tires I throw at it and with many hours of riding I have not had a single issue with it. I don’t do anything maintenance wise with my forks other than wiping down the stanchions before every ride and making sure that there is sufficient air in the fork. This article is about the last 6 months of testing and why I think that the Luna Lander is the best value in fatbike forks on the market right now, even though it is currently not serviceable (although they might be in the future). 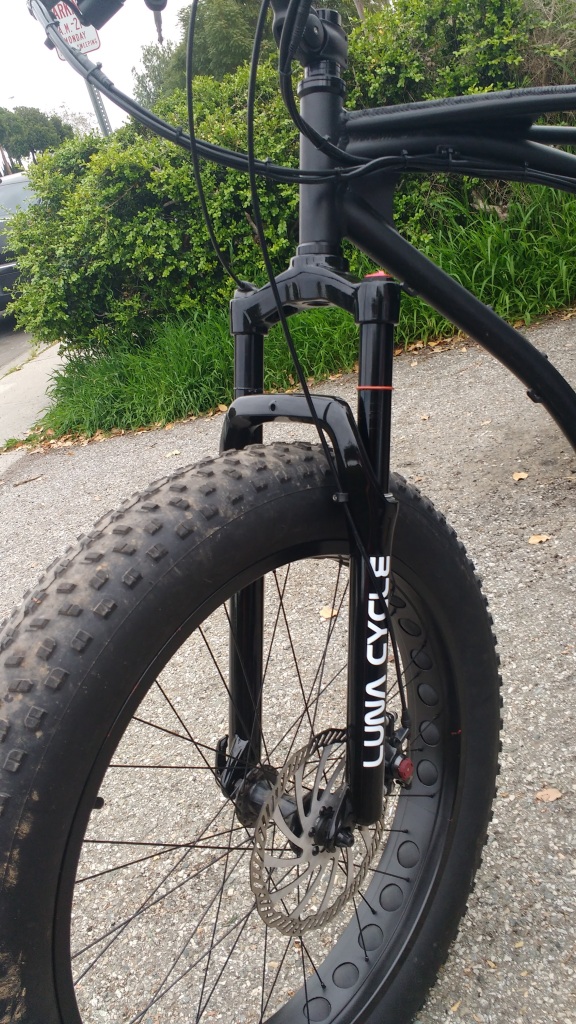 One of the first times I tried the Luna Lander was on Curt Fisher’s Luna 72v 3000W Rhino Cargo ebike. We were going to go riding and it was the only ebike he had to loan me (don’t ever loan me your ebike). Although the Rhino was ridiculously heavy (over 60 lbs) and had no PAS system I still found myself having a really fun time on the trails with it. I can’t even imagine taking a cargo bike singletrack riding without some kind of suspension for on it, even if it was a fat bike. I was impressed at the performance and that it had a remote lockout system which is a nice feature to have and allows you to lock the fork in place from a switch on the handlebars. I had a great time and didn’t feel out of control any more than I usually do on that particular ride. Somehow I managed to not break the bike. 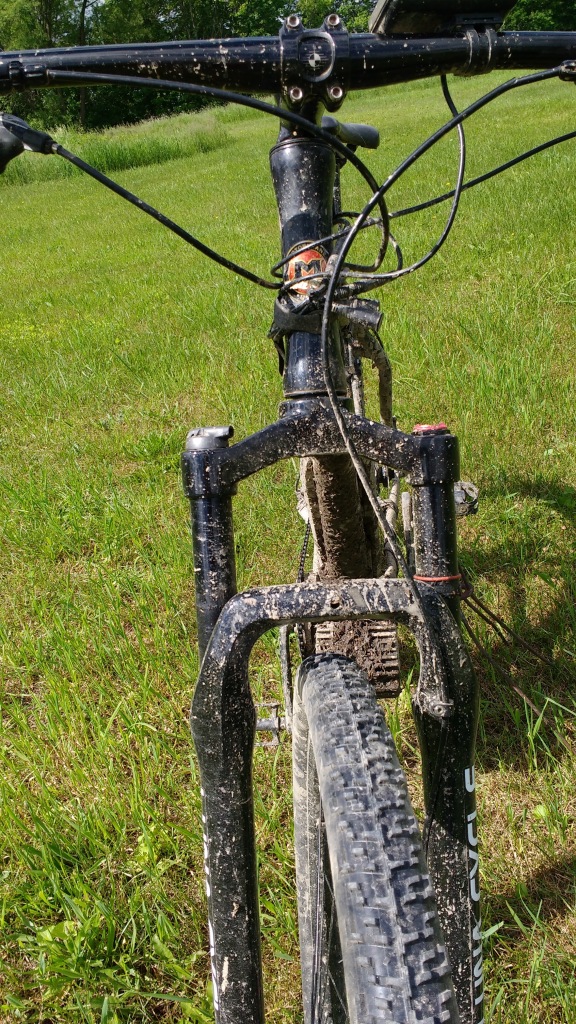 Luna Lander fork has plenty of clearance for 29 inch wheels, I just ordered a 29 plus Panaracer Fat B Nimble 3″ tire that should easily fit with room to spare

Two years ago I installed a $89 steel spring Luna fat bike suspension fork (review here) that I was pretty excited about. Although it worked well the first year during warm weather, in the wintertime I took it out on the trails and the grease on the stanchions thickened up and the fork just completely stopped working. Long story short, that fork ended up in the trash and I chalk it up to a failed experiment. I’ve had most of the steel spring forks I’ve owned die after 2-3 years and so that is pretty much what I expected to happen. That being said, I still have high hopes for the Luna Lander as the oil seems much less thick and not so much like grease and although I have not yet tested it in the snow. I’m really hoping it doesn’t have the air leakage problems that the Bluto fork does (fingers crossed). I have 2 Bluto forks which I love (review here) but they just don’t work right in the wintertime and I don’t have the time and inclination to swap out the seal sets for ones that actually will work in cold weather. I’ll post an update to this article after I thrash on the Luna Lander in the snow for a couple of months this winter. 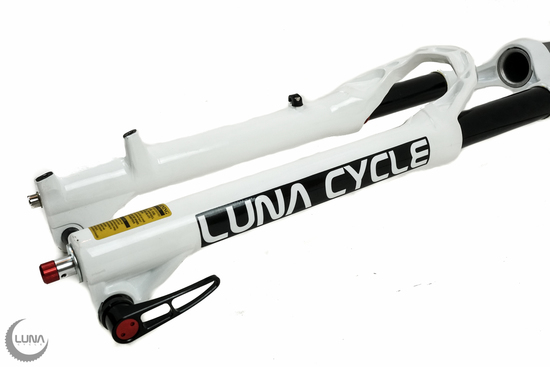 The Luna Thin ($219) is very similar to the Luna Lander, only designed for normal sized tires & 100mm hubs. The Thin is for tapered head tubes and through axle hubs.

The Luna Lander is about 2 lbs heavier than the Bluto but is also $400 cheaper. Suspension forks that you pay more than $500 for will almost always have a rebuild kit available, but the Luna Lander does not. My bike mechanic says you are supposed to rebuild the seals on your forks every year. I do it religiously about every decade without an issue. I find that more important than regular rebuilds, is storing your bike inside and wiping the stanchions off before every ride, and never ever putting the bike on the outside of your car when there is salt on the roads. An ounce of prevention will save you hundreds of dollars on bicycle maintenance. 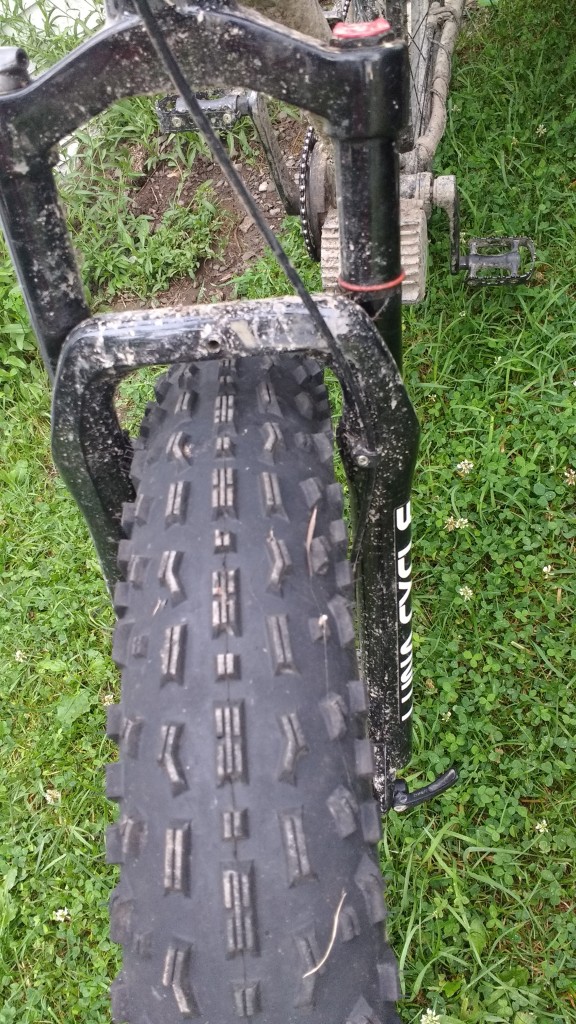 If you’re looking for an inexpensive fatbike air suspension fork for a 1 1/8″ Straight headtube and already have a front tire with 135mm Quick Release dropout width then the Luna Lander is going to be your best bet. Even with thrashing on this fork for several months I had no issues and no air leakage. I’m not sure why fat bike suspension forks are so ridiculously expensive and hard to find, but the Luna Lander is a game changer for sure.

UPDATE : Testing this fork in extreme cold weather (about 10 degrees F) it finally blew out. I have yet to find any suspension fork that will deal with the extreme cold, if you know of one please let me know.