With the introduction of the BBSHD, I had expected that the BBS02 had reached the end of its product lifecycle and would be quietly retired away. To my surprise, Bafang did a complete redesign of the BBS02 without telling any of its US based dealers what they were doing and released it without any fanfare. The new BBS02 version B has a totally different case, controller, nylon gear, pinion gear and bearing sets that are completely incompatible with the BBS02 version A. Not only that, the new controller has different firmware that does not work with ‘Karl’s special sauce’ the programming settings that all of you have gotten to know and love by now. This article will explain the differences that I’ve found with the BBS02 version A and BBS02 version B and explain how to program the BBS02v2 so that the PAS will work properly with the newer controller. We will also discuss how to go about getting the correct parts for your BBS02 version B in the event that anything should break.

Don’t know what version BBS02 you have? Closely look at the shape of the controller and it will be obvious. Version B sports the evil PacMan look. Wagga-wagga-wagga.

The BBS02 750W version B was introduced without notifying US-based dealers that the changes were coming. The pictures on their website at some point switched over to the newer version B, but that was it. This became quite a problem, as Bafang will only allow dealers to order spare parts for their drive units while they are in the middle of a production run. Bafang finished their production run for the BBS02 version B with an entirely new part set and released it out into the wild without selling spare parts for the unit to US (or Chinese) dealers. Since Bafang won’t even talk to anyone who doesn’t want to buy $500,000 worth of drive units at a time, this has left everyone out in a lurch.

The v2 of the BBS02 has a new rubber washer at the end of the axle that I have yet to figure out how to get past without completely destroying it.

To further complicate matters the new controller for version B had different programming that would cause the PAS to not function properly if the “Time Of Stop” variable on the PAS programming page was set to less than 10. Since I have been touting ‘Karl’s Special Sauce’ as being the best thing since sliced bread, and those programming settings had a ‘Time of stop’ setting of 5, pretty much anyone who set their version B controller to my programming settings was sure to have a flakey PAS that would pretty much not function properly. This was less than ideal.

Rotor width on v2, the motor appears to be the same unit

I’ve updated my programming page to reflect a ‘Time Of Stop’ of 10 on all my .el files and images, but I have to admit I’m still a little miffed at Bafang. I haven’t had much of a chance to test the programming on the BBS02vB but it seems pretty similar to version A. I’m guessing the Time Of Stop changes happened when people kept complaining that when they stopped pedaling the bike would keep going for quite a ways. If you don’t have ebrakes that immediately cut the power this can obviously be a safety issue. You basically end up having to brake against the power of the motor until it shuts off even though you’re not even pedaling. Instead of fixing the firmware variable settings they somehow changed the programming on the controller to react differently to the same settings (factory default for TOS is still 25 on both versions). 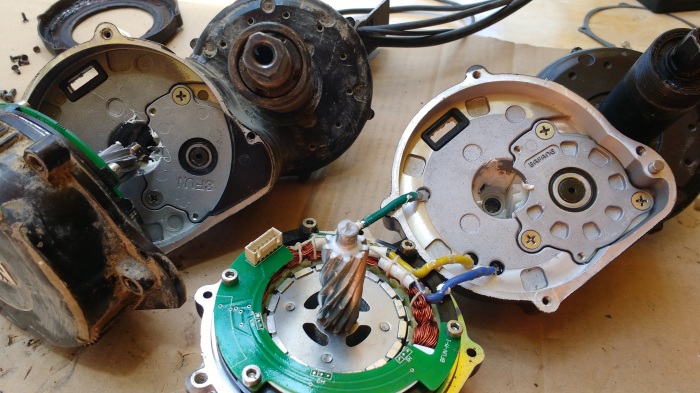 You can clearly see the differences in version A (left) and version B (right). The circular plate is different as are the pinion gear, bearing & nylon gear.

The procedure for taking the drive unit apart is nearly identical for the two units. The version B also has a rubber gasket that mates the controller to the housing to keep out water. The only other difference I found was that the Version B does not have the rubber plug above the circular plate that houses the nylon gear. The nylon gear seems to be an identical shaft diameter but the offset of the gear is different. I mounted a Version A nylon gear into a Version B unit and it was very clear that it was not going to work properly. The pinion gear is also very different and not interchangeable between the units. When you are ordering parts to repair your BBS02vB make sure that your Bafang parts dealer has some idea of whether the parts they are selling you are for Version A or Version B. If you start talking about the different versions of the BBS02 and the dealer seems to not know what you are talking about then you should probably find another dealer to work with. Right now Lunacycle has most of the different parts for the Version B drive unit, but they had to threaten to cancel a million dollar order to get them. A million dollars, that’s just crazy talk. At this point, Chinese companies are actually buying replacement parts from Lunacycle because it’s the only place they can get them from. What a funny twist of fate. I am still totally amazed that in less than a year Lunacycle has grown to be the biggest Bafang Mid drive reseller in the US to the degree that some Chinese Bafang resellers are buying parts from his US-based business. Go Eric.

Even with all the shortcomings of the BBS02 it is clear that Bafang is committed to the 750W platform. It doesn’t make sense that they would spend all the money they spent on retooling the BBS02 if they didn’t think they were going to make a whole lot more of them. I didn’t see anything in the Version B that would lead me to believe that the BBS02vB is going to be any more robust that the Version A. That being said I still have 10 ebikes with the BBS02vA that I beat on pretty regularly. The BBSHD still needs a dramatic increase in power for it to remain competitive in the marketplace. I suspect that Bafang will release a 35Amp version of the BBSHD at some point at the end of this year or early 2017 which I believe whole-heartedly that the BBSHD platform can easily support in its existing state. Keep in mind this is entirely speculation, but I believe it is coming.

Does it still make sense to buy a BBS02 750W drive unit? If you are trail riding on singletrack I would say that the BBS02 still holds its own against everything else out there on the market. If you are building an electric cargo bike or a tandem or if you want to run the drive unit at full throttle all the time then the 1000W BBSHD is a safer bet. The mid drive market is heating up with the release of the 3000W Tangent Ascent which is one of the most fun mid drives I’ve ever tested. Dave from Tangent is putting together a 6000W Astro 3220 based Ascent drive unit that I’ll be installing and testing in the coming weeks which I have high hopes for. Normally 4000W would be the most power that any sane person would want to put through a bicycle drive train, but I’m not a sane person. I live only to destroy, rebuild and destroy again. 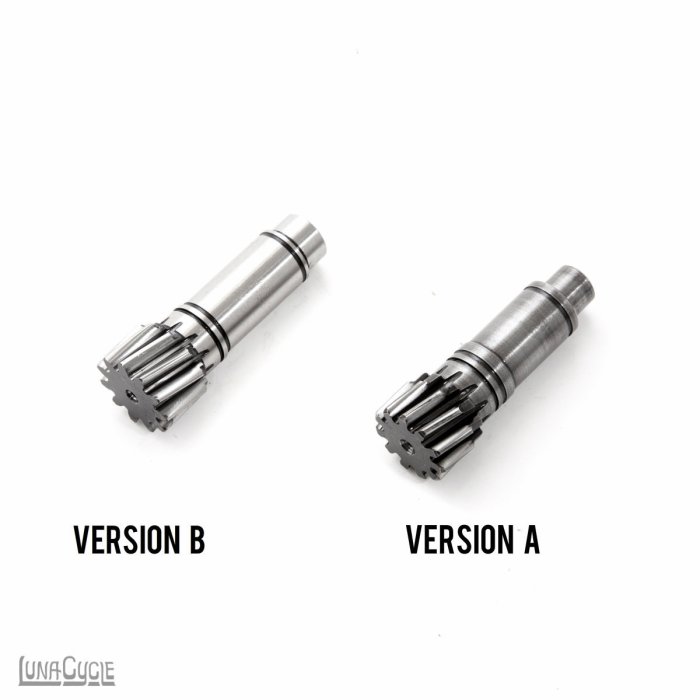 The pinion gear is also different between the different versions

On the B version the motor case is printed with BBS02B, with the original A version it just says BBS02