Before the Bluto Fat Bike suspension fork there was nothing. The only way to get a suspension on that fat tire bike was to get a fatter tire. The Bluto has been plagued by cold weather issues so I generally leave my expensive $500 Bluto Fork in the shed all winter long and only break it out when the snow melts. I had been looking for a cheap metal spring fork (the Bluto is an air shock) that I could take out year round so I pounced on the Sondors Bike upgrade Suspension fork (for $89 here) when Luna first stocked them a couple of months ago. Well, that first batch sold out quicker than Burning Man tickets, but lucky for me I was on the Luna mailing list so I snatched one up lickity split. I’m blaming all those Sondors Ebike owners for the difficulty in getting these forks, they all gotta get one for their fancy Sondors ebikes. 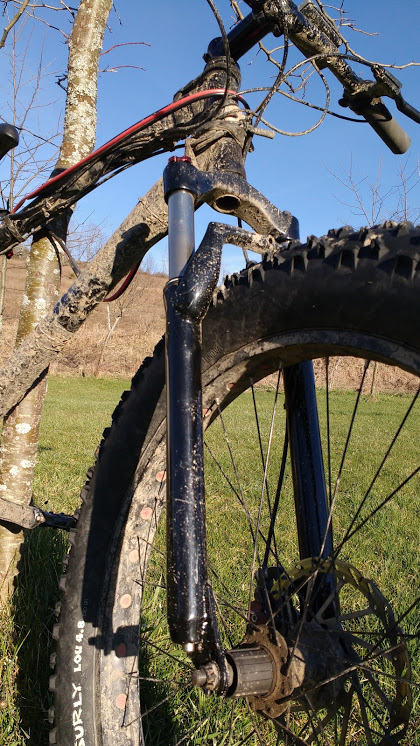 Hands down the cheapest Fat Bike Suspension Fork you’re going to find in the US at $89. Nice rear hub sans cassette. Arf, arf.

How did that cheap ass steel spring suspension fork ride, and would I recommend it to someone that I actually liked? Tough questions because as of right now I can’t think of anyone that I do like, except you. I really like you. You’re not like the other people here, in the trailer park.

First let’s talk about weight. The Chromoly fork that this suspension fork replaced weighed in at a hefty 3.5 lbs. The suspension fork was a whopping 6lbs and 11oz which means a bit over 3 lbs worth of extra weight. For a cheap fork with a steel spring in it I would say this was to be expected, if you want to play, you have to pay.

The Rosie O’donnell of Front Forks. Your skinny little carbon fork has got nothing on this baby.

As for mounting it, this fork is a 1 1/8″ non-tapered  fork which is the most common steering tube size for bikes, especially steel frames bikes. It will fit most non-tapered headtubes of older Motobecane Bikes Direct fatties, but none of the Gravity BD fat bikes (look for the 1 1/8″ head tube in the frame description) . If your head tube is tapered then you’re going to need a fancy pants headset adapter that is going to be super confusing to figure out. Study this document for at least 24 hours before attempting to purchase any headset, then you must pass a test from the undisputed alpha-bike nerd Sheldon Brown here, then ask someone else if it’s the right one. I honestly can’t figure out this headset stuff, it’s too way confusing and it makes my head hurt.

One thing that you will realize really quickly is that you’re going to need a crown race because the crown race on your old fork is not gonna come off, no matter how hard you chew on it. Once I got a new 1 1/8″ crown race for $5.99 shipped from fleabay I ended up having to bang it on with a steel tube larger than 1 1/8″ and a hammer in order to get it to set. It was therapeutic. 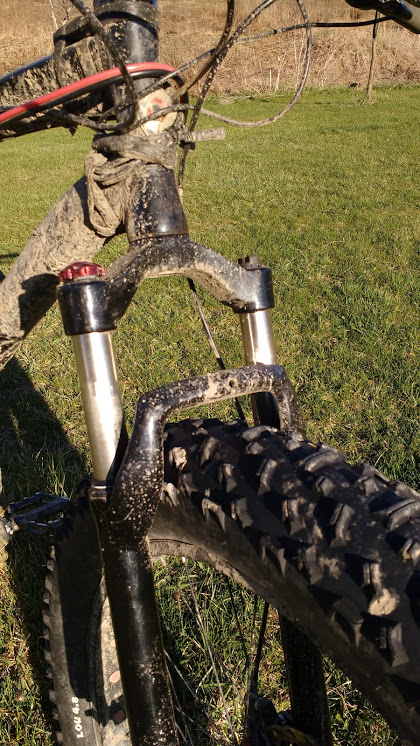 I ended up mounting a 130mm rear hub from a Deadeye Monster because the 4.8 Bud I wanted to put on the 80mm rim that came with the Boris X9 would not quite fit (it was close). The front fork was not quite long enough for the 21″ frame head tube either and the steerer tube only came up about 1/2 way through the bike stem as well. Since I like living on the edge it really is not a problem, every time I land on a big jump I wonder if the handlebars will just come off. That would make the landing oh so much more interesting.

This fork is nowhere near as nice as the Bluto, but it is still surprisingly good for a cheap fork. It excels at roots.

There is a lockout for what it’s worth as well as a preload adjustment which was too hard to turn and I like my forks pretty loose anyway. I ride with my ass so far back the front wheel seems like it is barely touching the ground most of the time.

On the road, the fork eats up potholes and makes it seem a whole lot safer than it really is when you’re going over 30mph. In the woods, the fork is a little stiff and quirky. It eats up the roots and bumps, but often with a jarring feeling unlike the silky smooth feeling of the Bluto. The Bluto has serious issues with cold weather where the air finds its way into the lower chamber offsetting the absorbing effect and making the fork collapse very easily. Adding more air does not fix the problem. I’ve seen this problem on my Bluto and so I never take it out when it is below freezing and you shouldn’t either. There is a rumor that CockShocks is working on a cold weather kit for the Bluto so people that are bat sh|t crazy can take apart their overpriced fork and replace the seals, but until that happens you’re better off swapping out your fork in the winter. 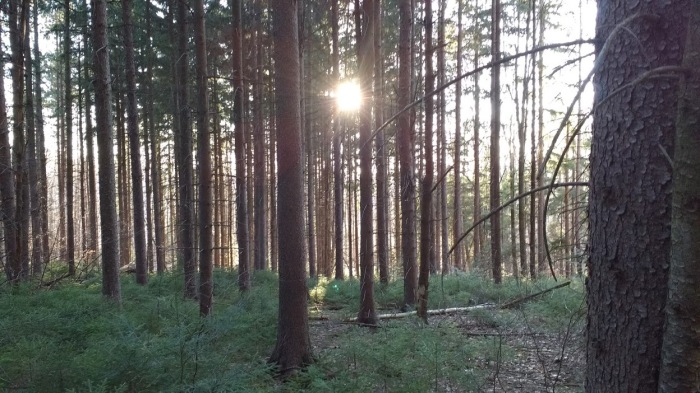 If you’re looking for a dirt cheap suspension fork that will take any tire of up to 4.5″ actual width for an electric commuter or a suspension fork for your eFat Bike in the winter, the Luna Fat Bike Suspension Fork for $89 might fit the bill. Remember the thing that World class downhill\mountain racer Alex McAndrew (the best rider I’ve ever annoyed by pedalling so slow) taught me : to keep those fork stanchions clean, even on your cheap crappy ass forks.

UPDATE : I tried to get this fork to work properly in the snow but the grease around the fork seals gets very hard in the cold and the fork complete seizes up. If you’re looking for a suspension fork for winter, look elsewhere.