I added a Nexus 3 IGH to this bike after about a year of thrashing on it, and it was worth it. Review is here.

I went for a ride on my newest build and was incredibly happy with the results. This is my third BBS02 fatbike conversion and I have to say it is probably the best yet. Although the donor bike is a single-speed Deadeye Monster, I found that with the proper gears in the front and the rear, the motor had enough speed range that I didn’t really need to shift. Riding along on snowmobile tracks at 30 mph completely out of control can be fun, but it’s nothing like singletrack through the woods. When biking through powder that is more than 6 inches deep you need a lot of power. Although my singlespeed tops out at about 20mph on the flat, I never found myself wanting to go faster than that in the woods. At

So far I’ve converted 3 Bikes Direct Fatbikes to a BBS02 drive unit. I purchased a Boris X9 and a Bullseye Monster with the intention of grinding off the BB and mounting a BBS02 on them. You can imagine my disappointment when both bikes showed up with a bottom bracket/chainstay intersection that looked nothing like the pictures. I blame it on frame sizing, since I am 6’10” I always order the biggest frame I can get. Since manufacturers always keep the chainstays about the same length, everything else on the bike has to change. This leads to bike that are more rear tire heavy than their smaller framed counterparts and the whole triangle gets pushed back towards the chainstays thus moving the chainstays out to the edges of the BB.

Bullseye Monster looks perfect for an angle grinder and a stock BBS02? Don’t bet on it.

The Deadeye Monster is the only 4″ tire fatbike with an aluminum frame that I could find for <$400 shipped. I bought mine from Bike Island for only $300 since it had scratches all over the frame and the front brake was knocked off and the fork was pinched. The Deadeye Monster comes stock with a 68mm BB which is perfect for an unconverted BBS02. The bike arrived again with a Bottom bracket that looked NOTHING like the picture on the website. Luckily on my bike there was a dimple on the chainstay that was more or less exactly where the BBS02 had to rest against. Modifying aluminum frames is huge pain when compared to modding steel frames, but they tend to be much lighter than their steel counterparts.

Deadeye Monster, don’t expect your BB to look anything like what is shown on the website, it won’t. But it will still work for a BB02 drive unit.

The Deadeye monster weighed in at around 32lbs before I swapped out the tubes and the seat and added the 9.5 lb BBS02. The chain was nice and heavy and both the freewheel and the chain-wheel were both steel. Getting the BB off was a real pain. There seems to be a direct correlation between how cheap a bike is and how hard it is to get the drive side Bearing Cup off it. I couldn’t do it with a giant impact wrench and I didn’t want to use heat so I put the bearing cup removal tool tool in a bench vise and used the bike frame as a lever. That seemed to work, although there was so much force I ended up moving the entire workbench. Remember the drive side bearing cup is reverse threaded so you need to go clockwise to loosen. My Bearing cup removal tool was not deep enough to grip the threads so I had to borrow one with a longer reach from my partner in crime Larry at Boxy Bikes.

It doesn’t quite fit, but it’s good enough with the chainring dimple there. Notice the BB/chainstay intersection does not look anything like the pictures above.

When mounting the BBS02 it won’t totally go all the way on, which is fine. You will need some washers to space out the mounting screws on the opposite side. The mounting plate must be flush with the BB housing. Also make sure the side of the plate with bumps faces in towards the BB. Use blue Locktite on everything.

The Non-drive side will need to have an offset crank mounted on it so that you can clear the chainstay without hitting it. I got mine from Doug at California E-Bike, although they are not listed on his website. They are slightly heavier than the crankarms that ship with the BBS02 so I would only replace the one on the non-drive side.

You need to grind down the cheaper adapters so the chain will settle all the way down on the teeth. The more expensive adapters from California E-bike will not need to be ground down to fit a 32T ring.

You will need one offset crank on the Non-drive side. Notice the washers used to space out the mounting plate.

Singletrack 32T front/22T rear ~15mph top speed chains or deep tread tires(like the Lou), get the 4×100 model from Slipnot and add the spacers with the repair kit and they will work, or better yet build your own for about $15). You will have enough torque to climb a 10 degree incline at about 8 mph. You will only pedal on really steep inclines, most of the time the motor will spin too fast.

Read it and weep, battery not included. Wow look at that pile of bike crap on the table! Do people really live like that?

I’ve tried all kinds of configurations for trail-riding but there is none that compares to the BBS02 (see why here). The problem with going with a single-speed is that you lose all the benefits of having a mid-drive unit. For another $350 or so you could throw in a Nuvinci rear CVT hub. I’ve heard that the Nuvinci was only designed to deal with about 60nm of force and the BBS02 can put out about 120nm. I recently purchased a commuter fatbike that I plan on installing a Nuvinci N360 on and will post a build thread when it is done.

The Deadeye monster has a pretty narrow front fork, so don’t expect to put anything bigger than a 4.5″ tire on it and still have enough room for chains. I was able to squeeze a Surly Lou on the back which is the king of fatbike tires. Because the Lou has a 7mm very aggressive tread pattern you will not need chains with this tire. It is slightly heavier at 1585g than the Vee-Rubber Mission 4, but well worth the weight. A great list of fat tire weights can be found here. 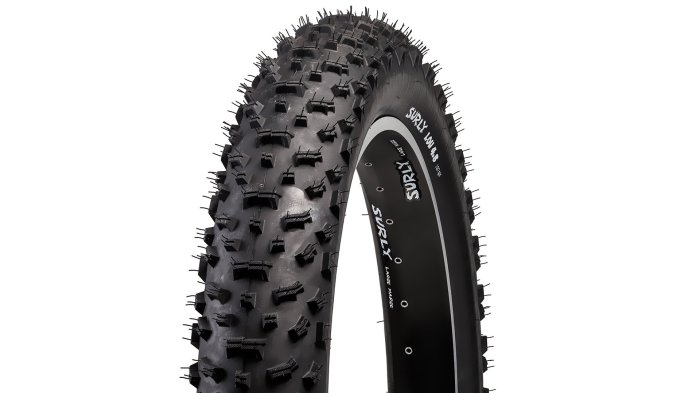 With everything except the battery my bike weighed in at just under 42lbs. Figure another few pounds for a LifePo4 16S2P pack and your are still under 50 lbs, a featherweight for an electric fatbike. You should get about 90 minutes of riding unless you are plowing though a lot of powder then your riding time could be cut down to 45 minutes or less. Deep snow has an insatiable appetite for Watts.

For a battery pack get something that is 48V and puts out at least 30Amps continuous. The highest I’ve ever seen on my watt meter for the BBS02 is 26Amps, but you don’t want to stress your BMS (if you use a BMS at all which is recommended). 12S2P Lipos from Hobbyking are a good option if you know what you’re doing. If you don’t really know what you’re doing, then I’d go with a 16S2P Lifepo4 pack as they don’t explode as easily when mishandled. A nice 25R frame pack from em3ev is another excellent choice for a little more money. The only Chinese vendor I recommend for the 750W BBS02 is Paul at em3ev at $499.

For instructions on how to mount a Bluto onto a Deadeye Monster which does not have a tapered headtube check out this post.

For step by step instructions installing a BBS02 look no farther than here.

UPDATE: The newest Deadeye Monsters ship with a 100mm BB & 80mm rims (ignore the specs on the website). Your best bet is a BBSHD 1000W system.