Plastic cell holders are all the rage in pack building nowadays, now when I was a kid…

Whether you’re in the market for an 18650 ebike battery pack or you’re thinking to build one from scratch one of the big decisions you’re going to have to make is whether you’re going to go for a pack that is glued together or one that uses plastic stencils to keep the batteries together. There are benefits and drawbacks to each and this article will help buyers & builders alike educate themselves on which setup is going to be best for them. 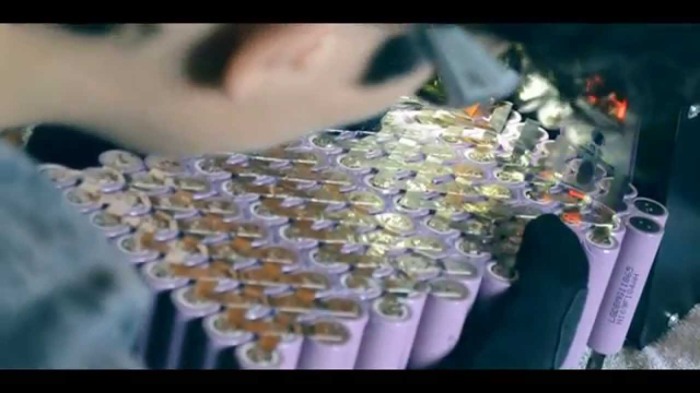 Damian Rene showing just how much fun pack building can be on his Youtube channel. The glued packs offer maximum power density for your pack.

For many years, almost every custom hand-built pack that was a non-standard shape was hot glued together. The idea is that you hot glue the cells together and the glue and batteries creates the structure of the battery itself. Doing this allowed builders to make batteries in almost any shape, but the problem was that the glue can trap heat in the center of the battery pack making it harder for the center cells to shed heat. Another big problem is that the packs really must be padded because when it bumps against the frame of the bike the cells themselves often take the beating.

Hot glueing packs is the cheapest, simplest and most common way to get into pack building

With 18650 plastic cell holders you can make almost any shape

Over the past year or two we’ve seen more and more packs come onto the market that use plastic cell holders to create a structure for the battery pack. These plastic stencils run about $5.50 shipped from China for enough stencils to hold 50 cells here. The quality of the plastic is pretty low and I have a hard time getting the stencils apart without breaking them. I’ve found that a good way to get the plastic stencils apart is to use 2 long blocks of wood, one on the top and the other offset on the bottom, and gently tap the top block with a hammer to get them apart. If you look carefully at the stencils you’ll see that they only go together and come apart one way. If you’re not taking them apart the right way and start beating on them with a hammer they are just going to break (trust me on this one).  You also must put them together one dimension at a time or you can end up with the situation shown in this Bruno ‘Power’ Buccianti video where you can’t actually physically get the stencils together.

So how do you find out if the packs you are buying are using plastic stencils or are glued together? Sometimes the description of the battery pack on the website will say, but often it will not. The only way to be sure is to ask. I’ve found that some packs I get, like every single soft pack from Lunacycle, has been plastic stenciled packs. The 48v shark packs (in the Hailong frame pack case) are all stenciled, but the 52v shark battery packs from Luna are not. When I asked Eric about that he said that there just was not enough room in the shark case for 52v worth of batteries and the BMS so they had to glue the cells together. When you buy a pack that is glued together it is important that you buy the right cells to go with the power load that you are going to use. You can get by with a 25 amp BBS02 with a 52v NCRb shark pack, but if you plan on using a BBSHD or another 30 amp motor then you should go with the PF or GA cells. My GA shark pack is currently my favorite battery and I’ve had zero issues with it after several months of hard abuse.

A hot glued 52v NCRb pack. The case is literally packed to capacity.

Just because a pack is glued together does not mean that you should avoid it. There are plenty of glued packs out there that work very well in the designed power range. The problems start to crop up when you are ‘pushing’ the cells to the limit of their discharge capability on a regular basis. If the pack is getting too hot after every ride then you need to consider getting a pack that can put out more power without generating quite as much heat. Certain battery chemistries like the NCRb and the GA cells tend to get warmer than other chemistries like the 25R which doesn’t seem to get hot no matter how hard you thrash on them. The best way to purchase batteries is to educate yourself about new cells and to try them before you buy, if you can.

Unfortudently, both Clinton and Trump have asked me to be their running mate and I honestly can’t decide which one to choose. My policy of a free handgun and 40 oz of beer for every single American will guarantee a win to whomever I run with. Don’t worry, I’ll get the Mexicans to pay for it.

If you bend the contacts you can get the cheap spot welders to go three deep. This welder died about 3/4 of the way through my first big project. Lame.