On my latest trip to LA to visit Lunacycle and test the Apex and Apollo ebikes I found a new and unexpected love, the latest version of the Luna Apocalypse scooter. I guess the old 52v 35mph 2WD Luna Scooter was not radical enough so Eric decided to sell a bunch of higher power scooters with upgraded hub motors and suspension. During the ‘lets see how insane we can make this thing’ they hooked up 2 adapto controllers and ran 10,000W at 96v through an upgraded Apocalypse scooter and discovered a 50mph electric transportation device that no business in their right mind would ever want to sell to the public. The V2 of the Luna Apocalypse scooter runs at 8 volts higher than V1, with 60v nominal (over 70v fully charged) 20Ah pack and it is right on the very edge of what I would consider being sane. This article is about the 4 happy days I got to spend thrashing on this scooter and why I think it might actually be the first electric scooter that I ever buy, because the tires chirp every time you hit the throttle which is what they are supposed to do.

When slumming it at Lunacycle whenever I needed to get out of the warehouse and tool around town, I constantly found myself grabbing this scooter. Ebikes are pretty fun, but there is something about riding an electric scooter at 35mph that feels wickedly dangerous. 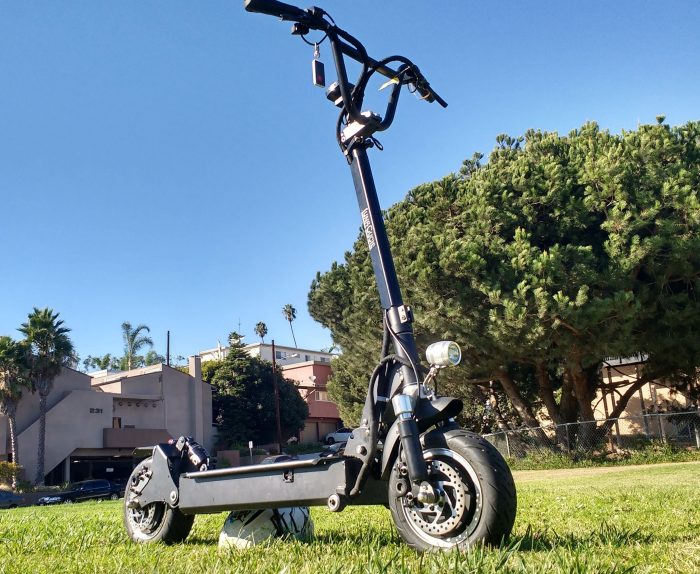 Getting on the new Luna scooter the first thing I noticed was the remote RFID keyfob that turns the scooter on and off. It’s a nice feature that I wouldn’t expect to find on an electric device in this price range. I dread to think of what would happen if you lost the keyfob, and I’m not sure how much battery power it drains to sit and listen for the signal to turn on. It would be wise to either leave this scooter on the charger or charge it at least once every year. I assure you that this scooter is so much fun, you’re not going to be able to let it sit for a year and not ride it. 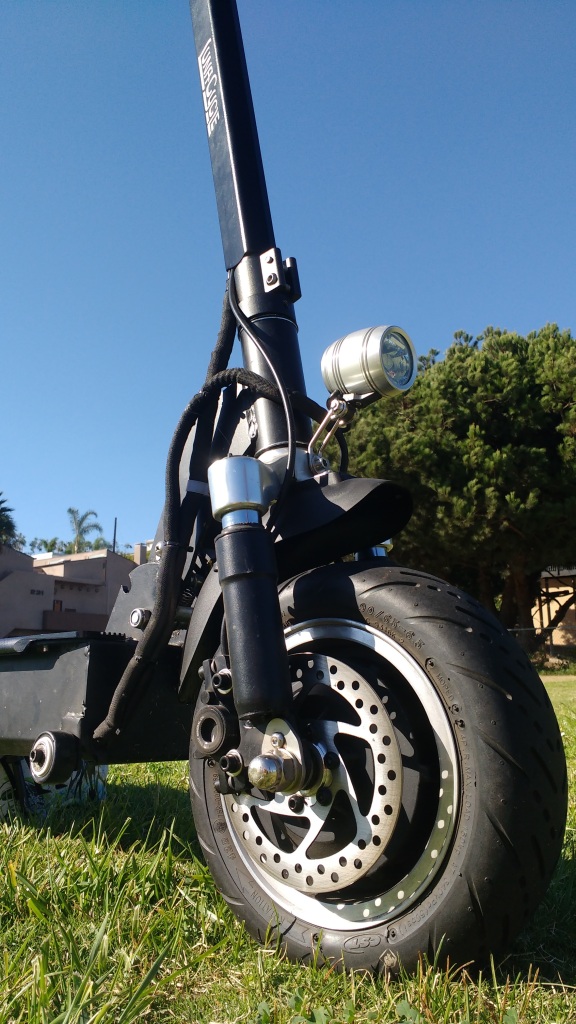 Bigger wheels and front forks mean pothole eating power. There are tiny wheels on the battery box to prevent damage while curb dropping of laying it down at high speeds.

On the left-hand side, there is a button for turbo and eco mode. I couldn’t stand riding on anything other than turbo mode, although eco mode is probably more than enough for most people who are not adventure-seeking daredevils. There is also a button to use just the rear motor or to power both motors. If you’re going for distance then I would set it to single\eco mode. If you want maximum tire chirping and white-knuckling fear you should leave it on dual\turbo mode.  One of my few complaints about this scooter is that when you peg the throttle (which I always do) then you often end up hitting the turbo\eco mode putting you into a slower (or faster) mode than what you probably want. The first modification you will want to make on this scooter is to move stuff around so the throttle doesn’t turn off the turbo mode (a 30-second job). 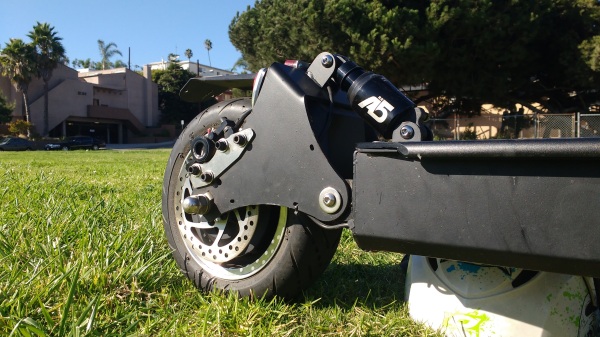 The brakes don’t kick on the regen so braking is smooth and safe, unlike earlier generations

The wheels are substantially bigger on this version compared the original and it seems to increase the top speed a bit on the scooter. It can do over 35 mph with ease and goes slightly faster than that on the downhills. In all honesty 40mph on this scooter is terrifying, but being able to fly up steep grades at over 25mph is pretty exhilarating. The extra 8 volts of power is very much a welcome addition to this scooter. 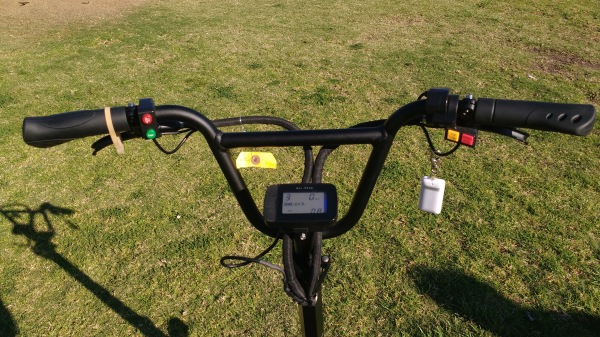 At takeoff, the controllers are tuned at the edge of what most people are going to be able to handle for acceleration. The new handlebars are straight off a BMX bike and I like them much more than the old collapsible handlebars from last years model which felt more like a suggestion than something you could use for support. The BMX handlebars mean that when the scooter is collapsed it is slightly wider, but it is worth it for the safety and comfort. 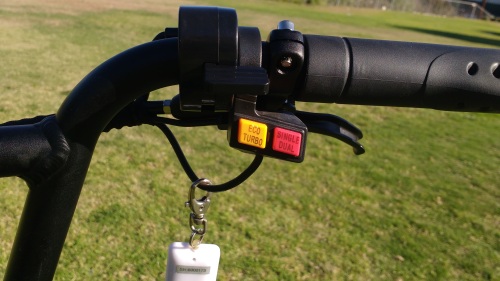 This scooter is wicked fast and seems to be able to outrun most ebikes it is pitted against. It’s funny because it also seems to be completely ignored by the police even though it is clearly totally illegal. Because it is totally silent you can get away with stuff on this kick scooter that you would never be able to pull off with a gas-powered scooter. In city traffic, the scooter easily keeps up with the traffic and in fact, it makes most cars feel way too damn slow. It seemed to be able to eat up every pothole I could throw at it and even at top speed I never felt like I was going to wipe out and crash. 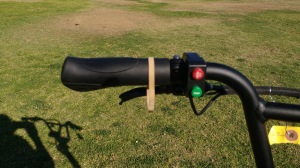 The battery on this model is a bit bigger in voltage than the old pack, but is still 20Ah. I would take this scooter out for several hours and thrash on it with dual power sport mode and I never ran out of juice with it. At the higher voltages it was nice because as the pack started to die it was still pretty terrifying to ride. If you do get stuck somewhere with a dead battery it is pretty easy to ‘kick’ this scooter home, or if you’re lazy like me you can just call Uber or Lyft and throw it in any car trunk on the market. Try to do that with a full-size ebike, or even a folder. 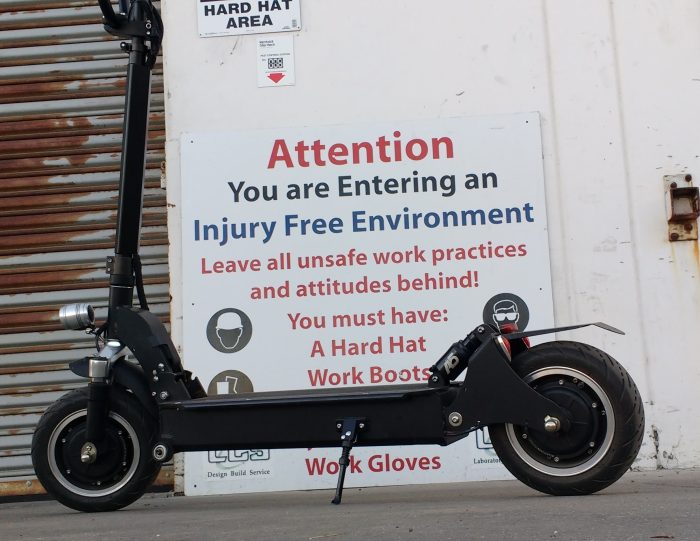 If you ride this scooter like I do, personal injury is almost guaranteed eventually. Remember, safety fourth. 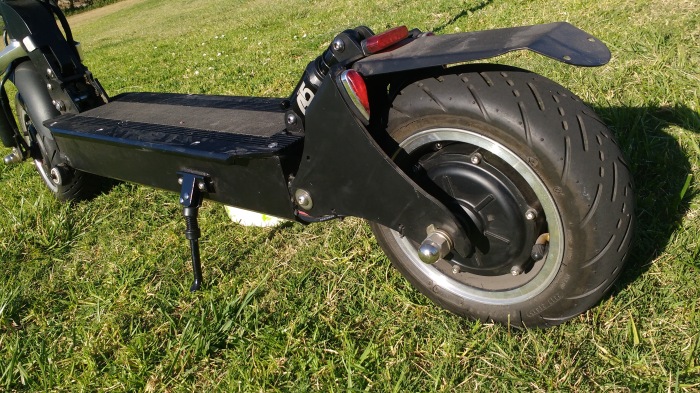 Cute rear fender and built-in brake lights are not only cool, they might save your reckless life

Even with all the awesome ebikes to choose from to thrash on at Lunacycle, I often found myself wanting to take out the new Lunacycle Apocalypse scooter. The safety of the built-in lights, the comfortable and highly visible full height posture as well as saving my poor hemorrhoids laden ass the stress of sitting on a bike seat all add up to a package that is unlike anything else you are likely to find here on the US market. A container of the V2 Apocalypse scooters arrived and are currently in stock for $1790 right here. Only the maniacs at Lunacycle are reckless enough to market and sell a product this fun without staying up at night in fear of the liability.

“Private property and racetrack use only” my ass. 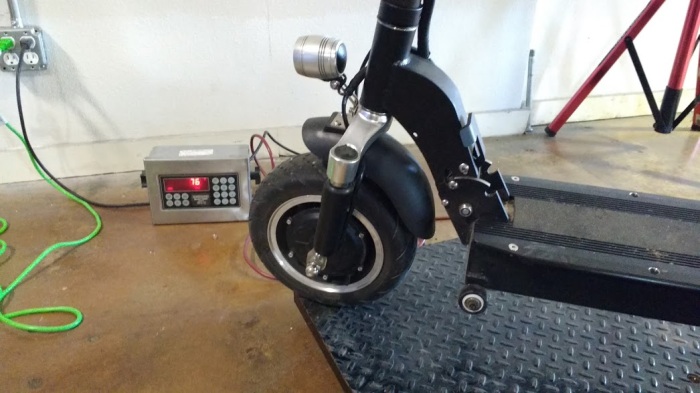 At 76 lbs it’s not light, but your fun factor per pound is gonna be pretty darn high 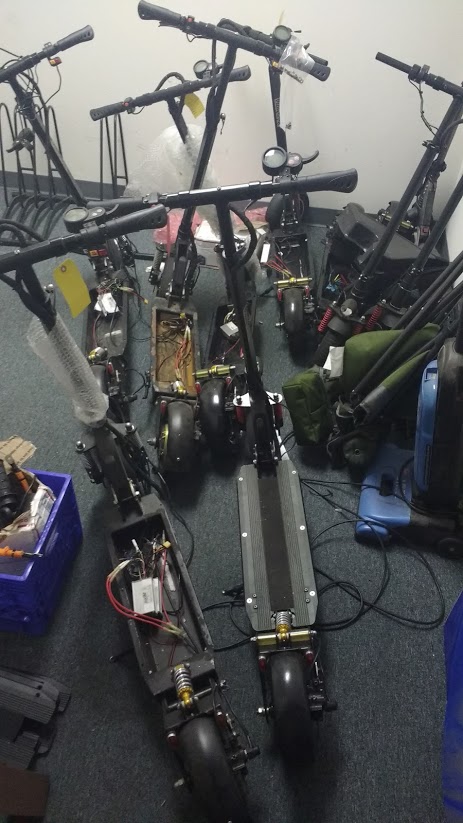 The place where old Apocalypse scooters go to die

19 thoughts on “The Second Coming : Version 2 of the 35+ mph Luna Apocalypse Kick Scooter”