When it comes to riding my bike on any road, it takes a lot to get me excited. There is an exception to every rule and my exception to my disdain for road biking involves the Blue Ridge Parkway \ Skyline Drive in Virgina. The Blue Ridge Parkway runs for 469 miles through Virgina and North Carolina while Skyline Drive is a 105-mile section of it that runs from one end of Shenandoah Park to the other. There are few National Parks in the North East and I’ve been to Shenandoah National Park a dozen times and it never seems to disappoint. Although I wanted to go up to watch the leaves turn color (late October) this year I was a month late and instead got up there just as winter was starting to set it. Although my expectations were low, there was something wonderful about ebiking 100 miles on the Skyline Drive with the gloomy hollows, sweeping views around every bend and the bitter freezing cold. This article will attempt to convince you to quit your job, sell your house and take your ebike to Virginia to ride it on the Blue Ridge Parkway.

Around every bend are spectacular views

I decided to pack up my dirt cheap Orange Crush build (a $299 Bikes Direct crappy heavy monster with a 52T BBS02) and then just bring along all my ebike batteries that didn’t suck to see how far I could get. I brought my homemade 24Ah GA 52v pack and my Lunacycle 30Q 48v 21Ah pack, the 52v 6Ah 30q Mini Cube and two 52v GA 13.5Ah shark packs. Of those three packs, I have to confess that the homebuilt pack was the star of the show. It had very little voltage sag and it just seemed to run forever. My oldest 52v GA shark pack had noticeably less power storage capacity than my brand new one did, but with hundreds of charges and several years of abuse, that’s not surprising (I’m on the third case). I just threw all the batteries in the milk crate, donned two pair of thermal underwear and 5 shirts and a coat and my winter gloves and hat and started off at about 10:00 AM after a hearty home cooked breakfast. 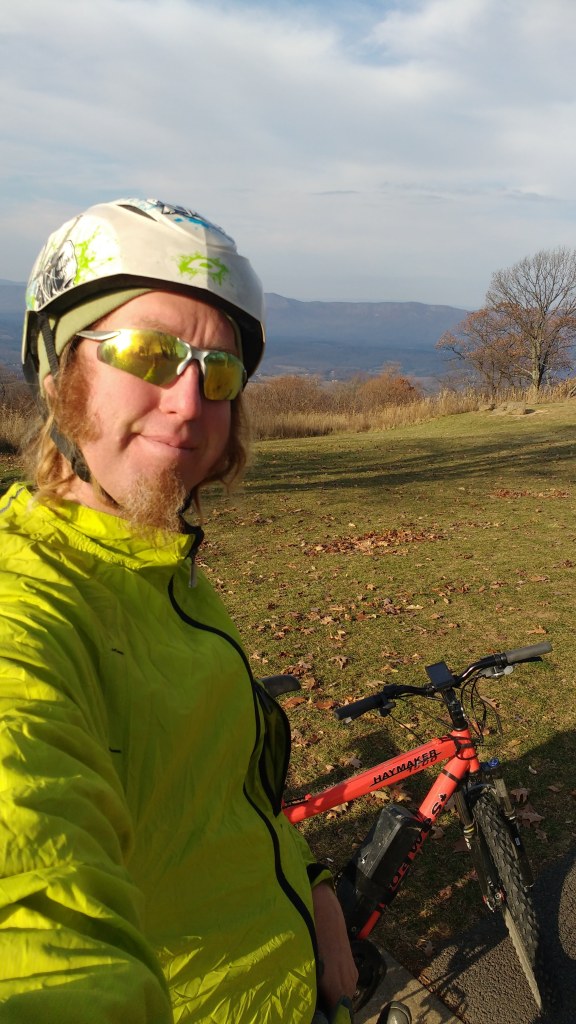 The Blue Ridge Parkway was built as a windy scenic road that follows the ridgeline through the mountains. There are about 70 overlooks, each one of them seem more breathtaking than the last. I have to admit that I got kind of lost in myself biking through the woods along the top of the peaks and time just seemed to fly by. I parked by the closed visitor center on the N end of the parkway where there were 2 heated bathrooms with outlets to charge my batteries. The two outlets are on separate circuits so I was able to charge 8 amps out of each one without blowing a breaker. I made a little note explaining that they were ebike batteries and that if they had any questions or issues that I was sitting in the blue van outside. A couple of people talked to me with questions, but no one messed with or tried to steal my batteries so that was pretty nice.

I averaged about 15 mph over the day going over 30mph on the downhill sections and crawling at 10-15mph on the uphill grades. I only saw one other biker the entire time I was there and he was creeping uphill at a slow walking speed wearing shorts and a short sleeve shirt. He was going to be dang cold when he finally hit a downhill section. I don’t see a lot of pedal bikers on the blue ridge parkway because many of the hills are insanely steep and go on for miles. I’ve ridden many sections of the parkway with a road bike and while the downhill sections are fun, the grueling uphill sections make you spend all your time wondering why you are doing this in the first place.

These pictures really don’t do this view justice, maybe if I cropped my crappy ebike out of the scene.

It’s interesting to me how this trip helped put some perspective on the ‘claimed’ 50-mile range of pretty much every single ebike listed on every crowdfunding campaign ever. Even if the crowdfunded ebike is listed as having an 8.8Ah 36v pack (think Sondors) they still claim a 50-mile range, this works out to 6.3 Wh per mile (36 * 8.8 / 50). What I got on my trip was about 36.6 Wh per mile ((52*13.5 + 52*13.5 + 52*24 + 48*21) / 100). Although I could have gone a lot slower on my trip I’m not sure how you can claim ranges on your batteries which are close to 1/6 of what you would get if you averaged 15mph on the Blue Ridge Parkway like I did. Granted it was dang cold which can cut battery capacity way down and there were lots of massive hills, but it still seems like fraud to me.

For motorcyclists the Blue Ridge Parkway is widely considered to be one of the most beautiful drives in the US. It runs for 105 miles and the speed limit is 35mph or lower. For a motorcycle 35mph seems a bit on the slow side, but for an ebike it is perfect. Even my crappy $299 Bikes Direct bike doesn’t feel totally sketchy at 35mph. I’m not sure why destination ebiking is not a thing, but if you’re looking to get the maximum enjoyment out of your ebiking experience, you’re probably not going to get that on your daily commute.

As I was zoning out and thinking about that crazy youtube video where the downhill skater kid hits a deer at full speed and does this massive wipeout where he ends up sliding down the road on top of the deer. About one minute after I snapped out of it just as a giant full-grown buck jumps out of the woods in front of my ebike and then falls down trying to run on the slippery asphalt with his hooves. I had to swerve around him and was going 35 mph so boy was I glad when I missed him. A few minutes later a baby bear cub ran across the street and then sat on the side of the road where I could watch him. Every single trip I’ve ever taken to Shenandoah NP I’ve seen a bear, so this trip did not disappoint. The wildlife paled in comparison to the incredible sweeping views around every corner. The road surface was meticulously maintained and I did not hit a single pothole in the 100 miles of highway I traveled. With the road being in such good condition it freed up your attention to focus on the wildlife, the forests and the views. 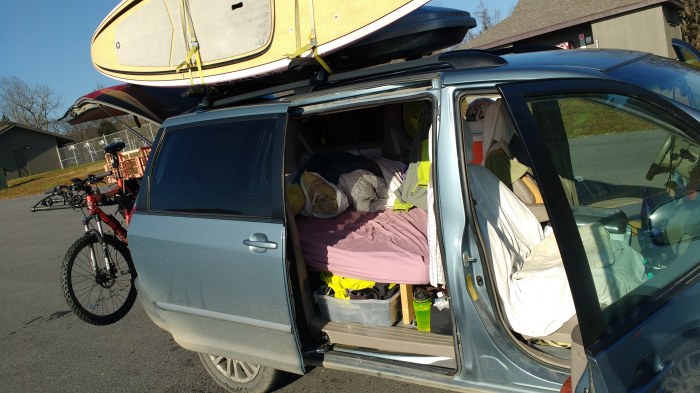 Solar panels on the roof power a fridge in the back and all my crap crams under the bed, you should see how messy it gets when me and my wife have been living out of it for a month.

Because the speed limit is 35mph and everyone is there for a leisurely drive I have always found all the cars on the parkway to be exceedingly courteous. This is a far cry from the meth-necks from upstate NY who intentionally run you off the road on your bikes, laughing hysterically the whole time.*true story* By going in the offseason you avoid most of the traffic, I was shocked at how few cars there were in early December. What it lacked for in traffic, it made up for in cold. Because you are several thousand feet in elevation and the road is on a ridge top it is pretty cold and there was always wind. Even with winter gloves and a winter hat and about 5 layers on top, I was still pretty cold the entire time. Going out with any less is madness as you will really freeze when you hit a 4 mile downhill section where you don’t have to pedal at all.

This is where I started from with my very rear-heavy ebike, don’t wear a backpack battery on long trips

The best way to conserve battery life was to either not pedal or to turn the PAS way down. The 52T chainring on the BBS02 is the perfect commuting setup for a 26” tire as it allows you to pedal along comfortably at 35mph. This setup does not work very well for trailriding as your lowest gear is just not low enough (not that it stops me or anything, if you want to become a better trail rider then ride hard trails with a really crappy bike). When going on the steep uphills I would generally set it at about PAS5 which gave me about 500W of draw on average. When the road was level I would pulse it and get the bike up to about 20-25mph then stop pedaling and let it slow down. As soon as it slowed down I would start pedaling again and it would speed up again. This method is more energy-saving than just pedaling along at a constant speed and is called ‘pulsing’ by hardcore hyper-milers.

The display looks really bright in the tunnel

How much energy you want to put into the bike depends on how much exercise you want to get. For the first several hours I found myself putting a lot of energy into pedaling, but for the last 25 miles or so I just stopped caring and found myself on power level 9 ‘clown pedaling’ ( I was moving my legs, but I wasn’t burning too many calories ).

At the end of 7 hours of biking my legs were super sore and crampy and boy did my ass hurt. Whatever your most comfortable seat is, you should bring it and do yourself a favor and mount it on a Thudbuster LT (your ass will thank you for it). Were the sore ass and 4 dead batteries worth 100 miles of pavement with more beautiful vistas than you can shake a stick at? You bet it was. Ebiking along the Blue Ridge Parkway is something for every ebiker to cross off their bucket list. I’m glad I got it done now so I don’t have to suffer through it when I’m a grandpa. 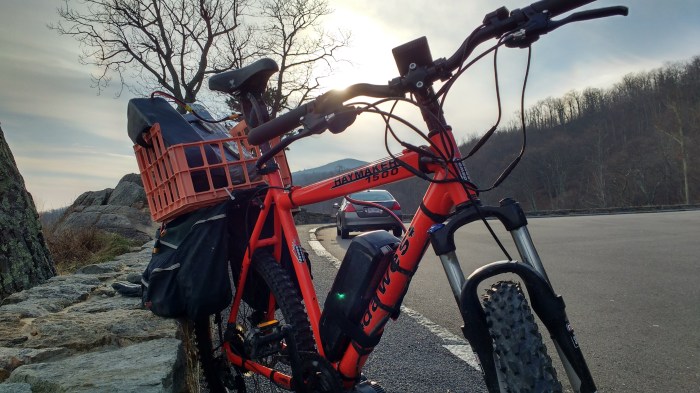 These are the kind of articles I should be writing, the ones that talk about what an awesome time I’m having while you’re suffering away at work sneaking peaks at my site while your boss isn’t looking. *evil laugh*

The reality is more like I have to take trips like this in order to keep sane during the very long and not very sunny NY winters.

8 thoughts on “There And Back Again : 100 Miles Of Destination Winter Ebiking On Skyline Drive”