Some ebike bloggers spend their time writing about bikes they have never ridden. This is not that kind of blog, instead, I spend my time using batteries, motors, and inverters to do things that I really should not be doing. In the process, I try not to electrocute myself or cause any permanent injury (I cut off the end of my index finger last week because the sauerkraut gods demanded a sacrifice). One of the things I’ve been meaning to do for the last 2 years is buying a cheap AC inverter off Alibaba and run large high amperage tools off it like pressure washers, log splitters, and rototillers. This might seem like an insane idea initially and I have to admit, that it is insane. The reality is that if you don’t care that much about your batteries and are willing to risk it, many large ebike batteries work pretty well as a Portable 120V AC Power source.

My wife went crazy this winter and bought hundreds of trees as well as 600 strawberries and 1000 asparagus crowns. It’s gotten way past the point where I even ask questions anymore, I’m essentially the free slave labor, and I’ve accepted my lot in life. The asparagus crowns were particularly problematic as they needed to be planted in a trench about 6 inches down. Shoveling by hand my wife was able to plant about 25 crowns in an hour. I begged her to stop, but she insisted planting 100 crowns this way. It was probably best to let her suffer a little to help teach her clicker finger a little restraint when it comes to its insatiable appetite for BUY IT NOW buttons.

I came to the rescue with a very inexpensive AC powered Rototiller I had bought from Amazon (available here) the previous year. Initially I was thinking I would power it directly with ebike batteries, but having an AC motor run with DC current is a royal PITA so instead, I just bought a high power DC->AC inverter that went from 48v nominal DC to 120V AC and was rated for 5000W. At 15 Amps a 120V service should never pull more than 1800W but the Watt ratings on these inverters are so ridiculously overstated I figured getting a 5000W inverter and running 1800W was fair game. I ran the rototiller for over 4 hours and barely made a dent in the capacity of my 60Ah battery. 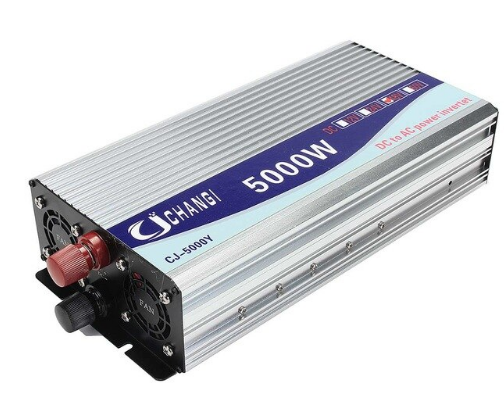 I bought my DC 48v inverter from AliExpress for $115 shipped (although now it is $125 here) and it showed up in a few days. I used XT90 connectors with pigtails and just crimped some solid copper ring connectors like these ones from Ebay 10 for $7. Probably an overkill to use solid copper, but I didn’t want to lose any conductivity on the connectors. Hooking up my ebike battery to the inverter was literally a 5-minute job, crimp the ring connectors, put them on and it’s done. Be aware that the inverter does draw power from the battery when it is on, even if there is no load. It’s also smart to keep an eye on the temp of the XT90 connector and the wires, if they get too hot then you might need a higher amperage connector or thicker gauge wire. Keep an eye on the battery temp as well to make sure you aren’t stressing it out. A battery can get warm to the touch but it should never get hot.

My battery has 3 XT90 connectors so I hooked up all 3 to the inverter, you probably can get away with just one

If I had to do this again, instead of hooking up the inverter to my 48v nominal homemade electric tractor battery, I would have bought a 60v nominal inverter and hooked it up to my Sur-Ron battery. That battery has an inline BMS to protect it from getting too low or shorting out. It also has a shock and somewhat water resistant case, whereas my battery has a crappy cardboard box with a Thermarest pad and a trash bag on the outside. I wonder which setup is more likely to explode? 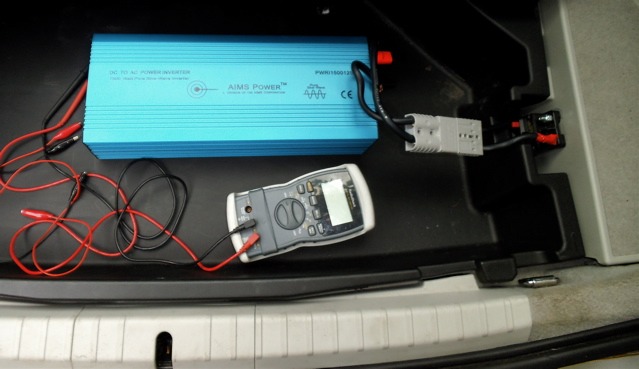 I can’t say enough good things about my Sur Ron and the battery for it. You can buy extra 60v 32Ah Sur-Ron packs for about $1600 here or you can get a pack out of a junked electric car (Volt is best I think) and use that as a much larger pack which will last for days instead of hours. I’ve gotten to the point where I’m going to start doing this myself.

There is a slew of people who use 12V inverters hooked into the 12v bus of their 2nd gen Priuses and if you leave the car on, the main hybrid battery will automatically replenish the 12V pack as it drains down. If the main battery gets too low the car will start itself up and just charge the hybrid battery in the driveway. Lots of people use these as backup generators when the power is out for several days (link to forum here). Be aware that if you’re doing this with 12V DC you must have much better connectors and much thicker wires because you will be pulling a lot more amps than with an ebike setup. 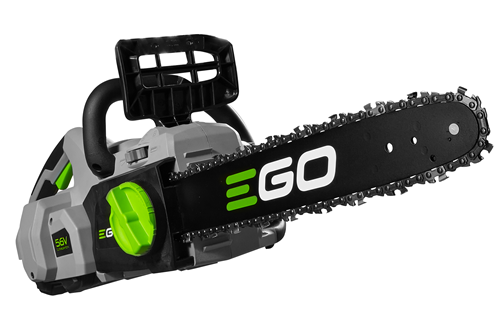 One of the biggest problems with cordless tools is the cost and durability. My wife and I bought an Ego 56v 16″ chainsaw for almost $300 and we have now destroyed our second one. The first one lost the controller and the windings on the second saw completely melted. Ego keeps sending us new units, but you can get a 120V AC corded saw which is much lighter for about 1/6 of the cost. The same is true with hedge trimmers, lawn mowers, pole saws etc. The cordless tools cost way more and have a much shorter battery life and are much heavier. You can throw a 20Ah+ ebike battery and the inverter into a small backpack and use an AC chainsaw or hedge trimmer all day (not just for less than an hour). Make sure the inverter has a way to ‘breathe’ (it has a small fan) or it might get too hot and burn out.

So there you have it, a way to create a generator you wear on your back to run AC powered hand tools all day long. Whether you’re a farmer, or a construction worker or a homesteader, or just preparing for the Zombie Apocolypse, any tool you can plug into an outlet, you can probably just run off your cheap Chinese inverter.

Whether or not you should is a different question entirely.

For more info on inverters check out this article on overlandsite.com