The blog has been quiet for a while as my life has gotten pulled in a lot of different directions. The sad truth of the matter is that I haven’t laid my paws on anything worth writing about for some time now. After riding the 6000W Ascent Tangent everything else feels woefully underpowered. All that changed the moment I stepped on the Luna Ludicrous Apocalypse eScooter. 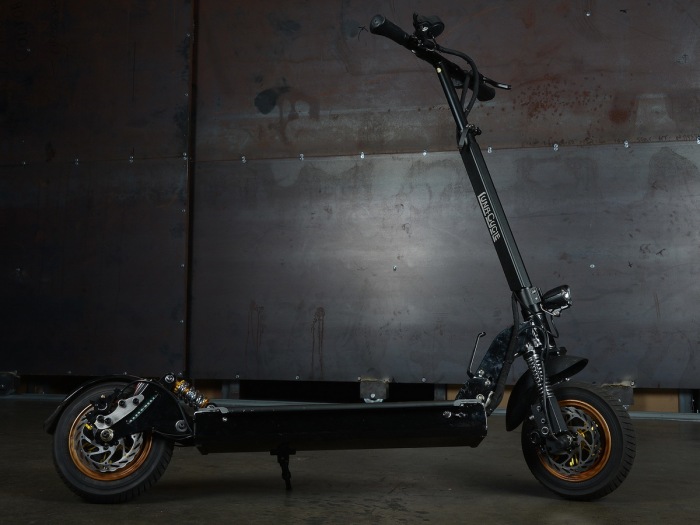 Eric has been working on trying to bring the ultimate high-powered electric scooter to market for some time now. The third iteration of the scooter was called the Luna Super Scooter and was selling on the website here for $1199. The super scooter is fun to ride but I felt like the rear brake was under-powered and it needed a front brake as well. The full suspension works quite well and absorbs a lot of the bumps and potholes you’re bound to run into on the road. The acceleration on the super scooter is smooth and steady and it is not hard to get it up to over 30mph. The two wheel drive Ludicrous Apocalypse eScooter is a completely different animal. The Ludicrous scooter sports dual electric hub motors both running at 1500W peak which makes this a 3000W scooter (over 4 hp). Direct drive motors generally suck on ebikes because the wheel diameters are just too big to put out optimal power. When you are running with a 10″ wheel all the sudden that changes because the smaller wheels are the perfect size for high torque. One of the problems the scooter seems to have is shredding the tubes from the massive force the wheels get when the throttle is pegged. The newest 60v v2 of the Ludicrous Apocalypse eScooter (v2 review is here) was just put up on the Luna website here for $1790. Although that seems like a hell of a lot of money for what looks like an oversized kickscooter, I have to admit I am sorely tempted to buy one for myself.

It doesn’t take much effort to get this scooter to go over 35 mph. You quickly learn to brace and lean forward when you pull the trigger throttle. If you don’t hold on tight and prepare for the intense acceleration it is easy to end up with the ludicrous scooter wheelieing. The Super and the Ludicrous scooter both have full suspension, but the front fork on the Ludicrous scooter is beefed up to support the dropouts and disk brake for the Ludicrous scooter. The only thing that is scarier than the acceleration on the Ludicrous scooter is the brakes. The Super scooter had a rear disk brake which was a little under powered for a 30mph scooter and no front brake at all. Front brake are hard on a scooter because if people use them without leaning pretty far back first it is pretty easy to go ‘over the handlebars’. With a rear brake it’s not as critical as if the wheel locks up it just tends to end up skidding and dragging behind the scooter. Most kick scooters only have a rear brake. The Ludicrous is not like most kick scooters.

After riding the Ludicrous for a while you learn to lean back pretty far before using the brakes. You also learn to mostly ignore the front brakes and focus on only using the rear brake most of the time. This can be a little counter-intuitive since the rear brake is on the left side (for ebikes the rear brake is generally on the right side) and the front brake is on the right side which is the same side as the throttle. This is a smart layout because people tend to brake with the opposite hand as the throttle hand. 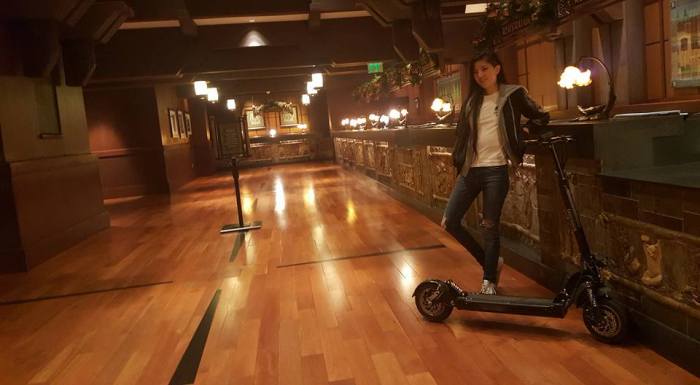 You can walk into the fanciest hotels with this scooter and no one will say a word.

The Super scooter is fast, with a top speed of over 30mph on level ground it is significantly faster than the 20ish mph top speed on the fastest skateboard I have ever ridden, the Dual+ by Boosted. The Ludicrous scooter is stupid fast at well over 35mph on level ground with a normal sized adult rider. How fast does 35mph feel on a scooter? The first time I got on one and ride it I was alternately terrified and gleeful at the same time. I giggled like a 5-year-old girl every time I punched the throttle and my sphincter would pucker up every time I so much as tapped the brakes. The disc brakes were frighteningly effective, I’m not sure why you would ever need to use the front brake on this scooter unless you suffered a catastrophic failure on the rear brakes and needed the front brake to stop with.

The Dual Plus used to be the fastest board around at 22mph, but lost its crown to the Ludicrous Apocalypse and Luna Super eScooters

The Super scooter tips the scales at 50lbs and the Ludicrous scooter is a whopping 65 lbs. Much of the weight is the massive 52v 24Ah GA battery which should give you several hours of high-speed riding. The hub motors don’t even get warm no matter how hard we seemed to thrash on them making me believe that these motors could probably take much higher power levels. Both scooters also collapse for easy transport. You can get away with bringing one of these scooters inside or on most any public transportation. The also make a lot of sense if you are a private pilot and have your own plane or you are touring around the world in a small yacht or a sailboat. When you arrive at a foreign airport or port you can just bust out this scooter and go anywhere within a 30-mile range at around 30mph. You can go a lot farther if you exercise a little restraint on your throttle finger. When broken down the scooter takes up very little space and would easily fit in the trunk of any car.

When we were out filming the Apocolypse eScooter with the drone one of the scooters got a flat tire. We ended up loading the scooter and the rider onto the cargo bike and heading back to the car. The other Super scooter only had a half charge to start with so it’s battery eventually died as we knew it would (we were out for almost 7 hours tooling around). I ended up pulling a second rider on the super scooter with the apocalypse scooter for about 10 miles to get back to the car. In the end, we arrived back at the parking lot where Eric was bored and had been waiting for us for about an hour. There was a steep dirt slope that was about 45 degrees steep and about 30 feet tall. Eric was doing loops around the parking lot, getting the Ludicrous scooter up to about 30 mph and then shooting up the dirt cliff. It was hilarious to watch, and I had to try it. Keep in mind that this scooter had been used all day to shoot video and we had ridden it already for several hours frequently getting it up to its top speed. Even with a nearly dead battery, the scooter was easily able to get up to 30 mph. The scary part was heading right to this dirt slope and hitting it at full speed. I have mountain biked pretty aggressively for about 15 years and this was a maneuver that I would never even think of doing on a mountain bike or a high-powered ebike. Going at full speed toward the dirt cliff was downright terrifying, but once you hit the bottom and started shooting up you could not stop laughing. It was one of the stupidest moves I’ve ever done on any electric vehicle, but the apocalypse eScooter makes you want to do stupid things because it is so much fun to ride.

The Luna scooters have working brake lights and blue led strips along the sides.

There are three power levels and only level 1 is actually even remotely legal on US roads. I can guarantee you that you will never ride this scooter on power level1 though because power level 3 is so much better. Although the Super scooter is fun to ride, once you ride the Ludicrous Apocalypse scooter your desire to pick up and ride the Super scooter or any other lower powered scooter is nonexistent. The biggest disadvantage I can see to this scooter other than the risks to your health and well-being is the fact that if you should run out of battery then you can’t just pedal it home. This scooter is so heavy that it is unlikely that you will kick push it down anything except downhill sections. I would encourage anyone taking this one out for long rides without a fully charged battery to bring a tow strap so their ebike buddies can tow you home when you run out of juice. With a 24Ah battery, it is extremely unlikely that will happen. I also found that after riding the scooter for several hours that my entire body was tense. When you are riding the scooter you are generally white-knuckling it whenever the scooter is over 25 mph or whenever you have to hit the brakes.

It’s been a long time since I have touched any product that has left me feeling a deep sense of excitement and more than just a little fear. This is a form of motorized transport that I will probably never own. Not because it’s not practical and reasonably price, more because I fear my own personal lack of self-control around the speed and handling of these scooters. They are advertised as for use on private property for racing only (yeah right). This scooter is not even remotely legal to be ridden on any public roads anywhere in the USA. That being said it is easy to ride these scooters on bike trails and roads without harassment by ‘the man’ if they are ridden at a ‘reasonable rate’ of speed.

What fun is reasonable?

No fun at all.

Just make sure that your insurance is paid up before you step on one of these things and for the love of all things that are good, wear a helmet. It’s hard enough to get a woman to sleep with me without severe brain trauma.

Check out this video and review we recorded. If you’ve ever wanted to hear me squeal like a little girl then you should watch this video. I make a total ass out of myself.

Update: Turns out that the jerk that you feel when you touch the brakes is actually the regen which can be easily disabled. Once you do that the brakes are very smooth. I would recommend that anyone who buy this scooter disable the regen for safety reasons.