I’ve been looking at aftermarket screw-in studs for fatbike and motocross tires for a while now since I love to ride all winter long and a lot of times the snow is just a mixture of ice and slush. The premier US seller of studs is a company called gripstuds who sell a variety of custom spike sizes made in Italy out of carbide steel for about $1 each. That is way too rich for my blood so I ended up getting a bunch of knockoff gripstuds from ebay for about $.50 each in two different sizes and testing them extensively this winter. Although they are a royal pain to install, I quickly fell in love with added traction I got in marginal conditions with these studs. After 3 months of  abuse, I ended up giving them my royal stamp of approval. 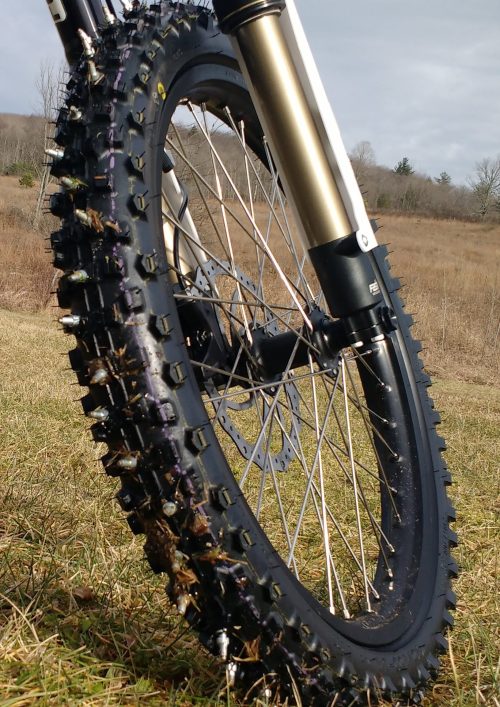 There are many different styles of studs for all different kinds of tires, the problem is that most of them quickly fall out. From what I can tell on the internet you either have to put the screws in from the inside of the tire assuring that the head will not pull out through the tire and then use a protective tube liner, or you have to use some kind of stud that looks like the gripstuds with a screw that looks something like an auger. Although during my testing I did lose a couple of the gripstud knockoffs, for how hard I thrashed on them I lost shockingly few. To compare I rode my Dillinger 4 studded tire which was studded from the factory and after 1 year of intermittent usage and over 25% of the studs are gone.

Lots of sizes for every application bikes, motocross, onewheels, tractors, cars and even heavy equipment

There were 2 sizes of studs I tested, the first with the smaller ones that were for my fatbike tires which I got on ebay for about $52 here and were about equivalent in size to the gripstud #1000 size. The steel was not carbide steel like the gripstuds are, but it still worked well for a sub 100lb bike in the snow and ice. The ebay purchase was nice because it included the right power tool bit for mounting and you should be aware that different sized studs require different sized mounting power tool bits. I cannot recommend the manual screwdriver, it would take forever to stud and de-stud tires. Even with the power tool adapter it was an exercise in patience.

Different sized studs require a different power tool bit to mount, if you need to do get 2 different sizes get the bit for the longer studs and it should work for both

When driving the studs into the tire I found it easiest to do when the tire was inflated to the max PSI (for fatties is usually 20psi). Sitting on a chair with the tire firmly squeezed between your legs it is pretty easy to get the stud to seat properly and then drive it in until you can hear it tearing the cloth cords on the tire. You need to go slowly and as soon as you hear the cords rip you need to stop driving in the stud or you are guaranteed to pop the tube. In the 3 fatbike tires I studded, 2 of them got holes in the tubes. So it goes. If you put holes in the tubes I would finish the whole tire then remove it and slowly back off any studs that are poking all the way through. Practice makes perfect and it’s something of a Zen activity best done right after you finish your morning meditation.

I really liked being able to stud whatever fatbike tire I wanted to instead of being forced to pick one that was already pre-studded. For whatever reason most factory studded fatbike tires have a pretty shallow tread, but for ebikes in deep snow the bigger the lugs the better. I felt like studding my own big lugged tires like the Bud, Lou and Nate allowed me to have my cake and eat it too. It was shocking how few studs I needed to put in to match the performance with factory studded tires.

The Sur-Ron was a hoot with studs in the snow, much improved over the stock setup

I tested my Sur-Ron eMoto with much larger studs that I also bought on ebay for $61/100 here. Unfortudently these studs did not come with an installation tool so I ended up having to buy the gripstuds #4800 installation tool from ebay for $12 shipped. This larger tool would have also installed the smaller studs, but the smaller stud install tool does not work with the longer studs. The longer studs really only make sense for motorcross tires, as the lugs on your fatbike tires are not going to be able to accept this longer auger. The longer studs also dramatically decrease handling on pavement or hard ground. Luckily it only takes a few minutes with a power tool to pull all the studs out when winter is over.

Due to the soft rubber of the Sur-Ron’s stock tires the rear studs in the center tended to bend over and rip out of the lugs on their own. When I mounted the studs on the outside rim of the tire they seemed to work much better in the snow and still cleared the chain and the hydraulic brake line. When I first got the Sur-Ron I tested it in the snow and ice and I was pretty disappointed. With the longer studs, it got an order of magnitude more fun. I still don’t recommend the Sur-Ron in over 6 inches of heavy wet snow, but with the studs, it gets pretty fun in the light and fluffy stuff. The studs also dramatically increase the handling on glare ice and packed crud. Be aware that if you torque the throttle too hard you will risk ripping the studs out of the tire and losing them. 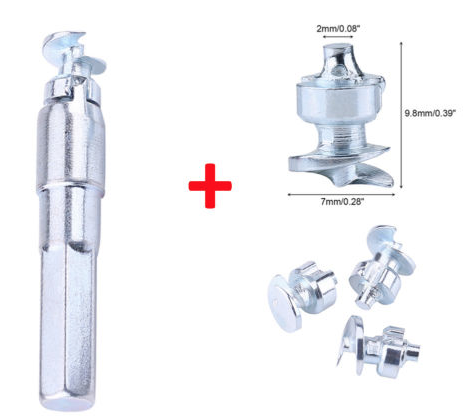 Both the short studs for fat tires and the long motocross style studs added a massive amount of traction in a variety of snow conditions. I was amazed at how much better the front wheel would track on snow and ice and also how much more power I was able to get out of the back wheel. When riding over large wet logs the wheel would spin a little bit until one of the studs would catch and it would rocket me over the top. This left a bunch of marks on my favorite logs, but it was worth it. On ice nothing is worse than having your front wheel kick out on you. With just 2 dozen gripstuds in my front tire that never happened. Pretty amazing when you consider that standard factory studded tires come with 120-240 studs. I felt like I was doing more with less and also it allowed me to use my favorate fatbike tires all winter long instead of having dedicated ‘ice bikes’ with factory studded tires.

If you’re looking for a cheap way to increase your level of enjoyment in the winter months with your ebikes and emoto then I highly recommend that you give the auger-style gripstuds or ebay knockoffs from China a try. I was pleasantly surprised with the results. 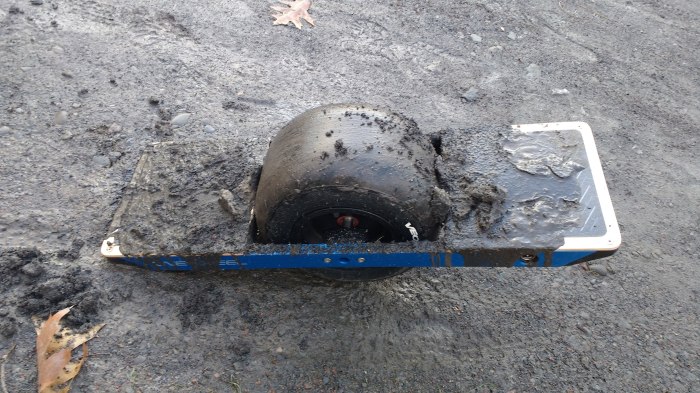 6 thoughts on “Twice As Nice On Ice : Gripstud Cheap Chinese Knockoffs For Fatbike And Moto Tires”