Makes me hungry just looking at it.

It took several years for BMC to realize that Nylon planetary gears in their larger geared hubs like the Mac motors could not take the kind of loads that people were dumping into them. Eventually they learned their lesson and switched to using composite gears, but with the BBS02 Bafang still haven’t wised up and made the primary reduction gear out of composite materials or metal. The primary reduction gear feeds against the metal helical gear on the motor and takes a tremendous load when the motor is started under load from a standstill. The problem is greatly compounded when starting off from a standstill in a gear that is much too high. This puts an insane amount of force against the teeth of the nylon reduction gear which can usually take the load, unless it gets too hot, then it ‘peanut butters’. That really is an ebike builder technical term to describe how hot nylon becomes the consistency of peanut butter and just falls apart under too much heat and load. I believe that black heavy axle grease leaking into the seal and getting on the white wheel is the reason for these failures. This grease can break down the nylon and cause the gear to fail prematurely.

You’ll have to use something pointy to get all the mud out. These bolts tend to strip and you want the wrench to go in as far as it can.

The biggest chain-ring you can get from Bafang is the 52T ring which is designed mostly for recumbents or folders with small wheels (20″ or so).  A larger chain-ring with a smaller wheel will mostly cancel each other out and ‘feel’ like a normal 44T chainwheel on a 26 or 29 inch tire. On my 26″ wheeled commuter bike I put a 52T chainring on the BBS02 and found that it goes frighteningly fast on downhill stretches (Over 40mph tested with a GPS). Going 40mph with a $295 bike is a good way to keep the gene pool clean, so I don’t do it that often. I do find that I really like the ability to pedal along at a decent cadence at 40 mph which I just can’t do with the smaller chain-rings. That being said if I want to climb any hill steeper than 10% grade I have to be in the smallest 36T granny gear or the combination of the 52T chain-ring and the 26 inch tire means that the pedal cadence is too low and I risk blowing the mosfets on the controller.

These three wires with banana plugs are the phase wires, carefully remove the silicone on them where they meet the housing.

If you run with a 52T chain-ring then you should expect to have to change the primary reduction gear every few years due to excessive strain. Even if you use a smaller chain-ring the gear can still fail. I’ve had one fail with a 36T Raceface Narrow\Wide chain-ring on a 8% grade in a very low gear when the motor was not even very hot. You can tell the primary gear has failed if the drive unit seems to be working properly but when you hit the throttle you can hear the motor turn but the chain-ring doesn’t turn. Luckily replacing the primary reduction gear takes about an hour and doesn’t require any special tools except for a set of lock-ring pliers which you can get from any hardware store.

You will need a tool that looks like this to get the gear off. They are called Lock Ring Pliers.

The first step is to remove your drive unit from the bike. Disconnect all the cables and the speedo wires and then remove the giant crank arm hex screws and then remove the crank arm with a crank arm puller. After that use a rag wrapped around the lock-ring to keep it from getting marked up and with a pair of adjustable pliers remove both large locking rings on the main shaft of the BBS02. Then remove the two main hex bolts that hold the triangle plate over the end and remove the triangle bracket. Often times you will have to force the BBS02 drive unit forward and back to ‘work’ it off the bottom bracket. Take your time go slow and don’t get too frustrated.

Carefully open the motor up and gently let the phase wires pull themselves through the housing.

Once the BBS02 is off you will need to remove the 5 hex screws that hold the chain-ring or chain-ring adapter on. Then there is 5 or 7 Phillips head screws that need to be removed to pull the plastic cover off the secondary reduction gear. I usually use a rag to wipe up as much of the axle grease as I can on the secondary reduction gear then reapply it before I put it back together. Once that cover is off you can remove the 3 hex bolts that hold the BBS02 controller on. Carefully remove the silicone around the 3 main phase wires that have large banana plugs on them so they can slide through the casing when you pull the motor off. Don’t use a knife, just use your fingers and a flat-head screwdriver. You don’t want to strip or damage the insulation on the wires.

Flip the drive unit over and remove the 4 hex screws that hold the motor onto the BBS02 drive unit. These hex screws are on tight and strip easily so use the right sized wrench, tap the wrench gently into the bolt with a hammer and use pliers to extend the power of the hex wrench. These bolts are a pain to remove if they strip out which happens.

You can use pliers to help remove stuck hex bolts but be careful not to strip them out.

This circular plate must come out and is held in by 3 screws.

There is a circular plate that covers the Nylon primary reduction gear which has 3 bolts to remove. I wipe off all the axle grease I can as I work then reapply axle grease before I put it back together. Once the circular metal plate is removed then you can use lock-ring pliers to remove the lock-ring for the nylon primary reduction gear. Carefully remove the old gear and replace it with the new one. I wipe off the axle grease and try to make sure I get all the little piece of the gear that might be stuck in that chamber removed. Use a toothbrush (preferably someone else’s toothbrush) if to get into all the corners of it and wipe the toothbrush off with a rag to get the grease off it. Replace the lock-ring and use axle grease to lube up that reduction wheel again. Screw the metal plate back on then carefully pull the three-phase wires one by one while you mate the motor back to the housing. Once the motor is fully set back in the housing screw it back together with the hex screws then re-silicone the 3 phase wires in the controller. This is the perfect time to install a temperature probe in your BBS02 drive unit (instructions here) if you haven’t done that already. Wait till the silicone dries then put the controller back together and carefully replace the 3 screws on it. You do not need to mount those screws as tight as the unit comes from the factory with.

Use the lock-ring pliers to remove the lock-ring then the nylon gear slides right out. This nylon gear is lubed in black axle grease which you SHOULD NEVER DO, it will break down the gear and cause premature failure.

Regrease the secondary reduction gear then replace the plastic cover using a screwdriver NOT a screw-gun and be very careful not to over-tighten the screws. The black plastic case cracks very easily if the screws are over-tightened at all.  Replace the chain-wheel \ chain-ring adapter using blue locktite on the 5 hex screws. Remount the drive unit on the bike and put the triangle plate back on and screw it down with the two screws and blue locktite. Then use a lock-ring spanner wrench and blue locktite to put on the first lock-ring and wrap the 2nd lock-ring with a rag and tighten down with adjustable pliers. Remount the crank arms and tighten down the crank arm bolts very tightly. Plug in all the connectors and you’re done!

Clean this chamber out with a toothbrush, then clean off the toothbrush a little bit and carefully return it back to its owner without getting caught. Try to get rid of any black grease you can find.

Hopefully the whole process took you less than an hour from start to finish. If you need to buy the primary reduction gear you can do it from China (for about $15-20 +shipping) or you can buy it from Doug at California e-bikes here for $30 or lunacycle.com here for $20 which is the smartest option. You can also try contacting the dealer for your BBS02 and getting free parts, but for Chinese bought drive units this will be next to impossible. BMS battery which by some people counts is a ‘reputable Chinese dealer‘ completely blew me off when I asked them for a replacement nylon gear (and even offered to pay for it). I ended up buying 4 of them from Green Bike Kit located here and it took them over a month to get them to me even though I paid for the expensive $25 DHL shipping. I would probably not buy from Green Bike Kit or BMS battery again, although I’m hoping it will take a long time for me to burn through 3 more of these gears. 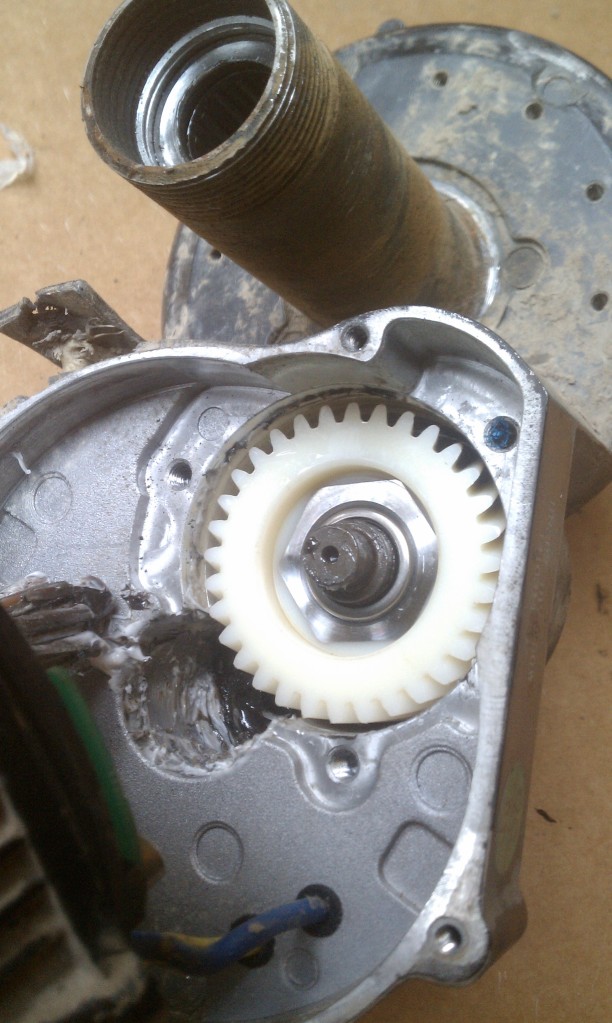 The new gear in place, everything is so clean and pristine! Use white lithium grease only.