Fallbrook Tech just released the N380 (press release here) which claims to have more range than the old N360 as well as being able to support a whopping 350W of power (or only 250W if you’re using a cargo bike). The new Continuously Variable transmission is supposed to be the same cost as the N360 it replaces which is rated for only a 250W electric motor unless you want to void your warranty. Incidentally, voiding warranties is what I do for a living. 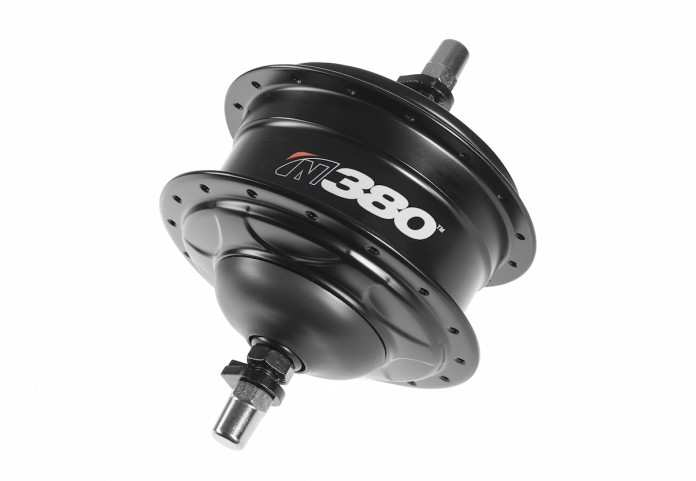 A cargo bike with only a 250W motor? Sounds about as useless as a screen door on a submarine. I’m building up a cargo bike with a Luna Cycle Custom Cargo Fatbike Frame and a 3000W nominal 6000W peak Lightning Rods Big Block drive unit on it with an 18 Fet Lyen controller. The N360, N330 and N380 will never be able to take that kind of load so I got my hands on a very old (discontinued in 2010) and very heavy N171 (8.5 lbs) which claims to be able to support 120Nm of force and 7 hp. The BBS02 can at around 1200 Watts put out peak 120Nm of force and 1 hp so I’m hoping to neuter the throttle using a Cycle Analyst to keep the Big Block from destroying the N171.  I did a wheel build up yesterday but I’m too embarrassed to take it to the truing stand of my local bike shop for fear I’d be shamed for my poor wheel building skills.

Shown with a harmony shifter installed.

The manual for the N330 (way cheapo version) and N380 is located here. My guess is the N360 will be discontinued and replaced with the N380. It looks like you can get a N360 for about $250 on ebay and the price on this unit will likely drop in the coming weeks as dealers try to dump their stocks. Unfortunately they don’t list the weight of the N380 which is pretty much all I care about. Since they are not talking about the weight it is unlikely there is any weight savings moving from a N360 to a N380. Also the dropout width for these CVTs is a standard 135mm which would work on builds like Duh Banana Bike and Sun-Kiss but not really on anything other fat-bikes as most have much wider rear dropouts. You might be able to use spacers and get it to fit into 150mm dropouts but since the axle is so short it will not fit on 170mm or larger dropouts no matter what you do.

This is how the balls make you go faster.

The Nuvinci drive train system seems like a good match for the low power European market but completely under-powered for the US ebike builder crowd. The N380 is a step in the right direction, but we’d love to see something that could take a lot more power. The 750W US standard would be a nice place to start, and if you could make it the same price and weight as the N380 that would be great too guys. Oh yeah and a longer axle so it would mount on fat-bike dropouts would be nice too.

There are some decent deals on ebay for the N360 going for $250 with disc brake compatible hub located here.

Another person is dumping old N171’s which are pretty hard to find with the disk brake adapter which are even harder to find in the 32 hole version here for $200 and 36 hole version here for $180. This seller clearly has no idea what he is selling, but the kits look complete to me. Be aware that 36 Hole fatbike rims are hard to find and I’ve only found one brand (Weinmann 80mm 36H) which run about $50 and are pretty heavy. 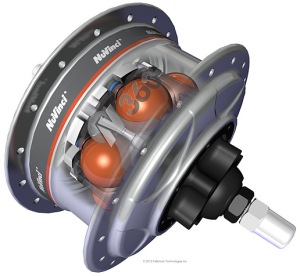 30 thoughts on “Nuvinci N380 – Now With Bigger Balls, More Range And It Can Take A Teeny Weenie Bit More Power”