When you’re going over 20 mph in the woods and you slam on the brakes you want to stop as quickly as you possibly can. Most fat bikes that cost <$600 have what I call  ‘Brake Shaped Objects’ (BSO) mounted on the frame. These ‘BSO’ look like brakes but don’t work very well at all. The stopping distance difference between a high quality disk brake and a bottom of the line ‘BSO’ can be almost half.

The best cable disk brake I have found yet, The Avid BB7 384 grams

One of the problems with the BBS02 is the difficulty that comes with trying to get the PAS system to work with Hydraulic brakes. The BBS02 includes some cable hand brakes with auto shutoff switches embedded in them, but if you want to mount this motor on a bike with Hydraulic brakes you have to custom install switches with hall sensors like these ones from em3ev.

These hall sensors are plug and play with the BBS02 drive unit and easy to mount on most hydraulic brake systems.

For single-track riding you are better off disabling the PAS system entirely, instructions on doing that can be found here. If you disable the PAS system you do not need to hook up the brake override system.

Depending on the size of your rotor you will need a different mounting bracket for the brakes you buy. The standard size is 160mm but your rotors could be 140-180mm or even bigger. It’s best to make sure you have the right size adapter for the rotor size you want to mount to. Be careful mounting too big of a rotor on a bike that is not designed for it as you can rip the brake mounting bolts out if you’re not careful.

When you buy the brakes you’ll have to decide if you want to buy the rotors to go along with them. I’ve noticed that if you buy the Avid G2 rotors they seem to make a lot less noise than using the crappy rotors that come with cheap bikes. That being said the G2 rotors do not seem to perform that much better, they are just a lot quieter. 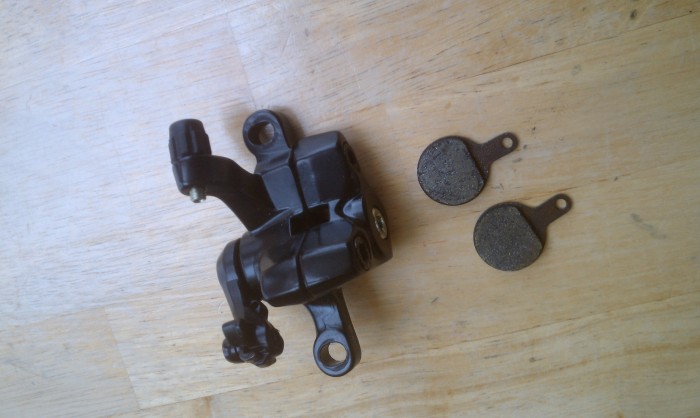 All disk brakes require a brake-in period. I often will ride several hundred yards downhill riding the brakes all the way when I first get them to roughen up the rotor surface so it will grip better.

The Avid BB7 is about equivalent in performance to a low-end hydraulic brake like the Avid Juicy Three. Cable brakes are much less of a hassle to deal with as the brake fluid doesn’t get replaced with water over time and also need to be bled. Bleeding brakes is one of the few things I have the bike shop do because it can be incredibly frustrating to get all the air out of the lines. Expect to have to bleed hydraulics about once every three to four years or so. The nice thing about putting on a pair of disk cable brakes is that you don’t have to buy or replace the handbrakes, any cable handbrake will work with most any cable disk brake. If you bring your bike inside where it is warm when you’re not riding you’ll never have to deal with your cables getting water in them and freezing up which can happen when the bike is left outside all the time.

Also be aware that wet rotors don’t work that well and when you’re riding in deep powder and falling down a lot your rotors get pretty wet a lot of the time. Test your brakes while riding and if they don’t work then keep them pulled down even with the motor running until they start to grip again. Normally you don’t want to pull on the brakes when running the motor as it is a waste of watts, but this is the one exception to that rule.

There are a lot of places to buy Avid BB7’s, I usually get them on ebay for around $67 a pair shipped with new G2 160mm rotors. I prefer to get stuff shipped from Hong Kong rather than mainland China because it seems that I get a lot less of the ‘fake branded‘ stuff from Hong Kong. Cycleling is the ebay user that I have bought 6 brakes from so far without any issues and they seem to be genuine. You can also get them from Pricepoint or Treefort bikes but expect to pay a lot more.