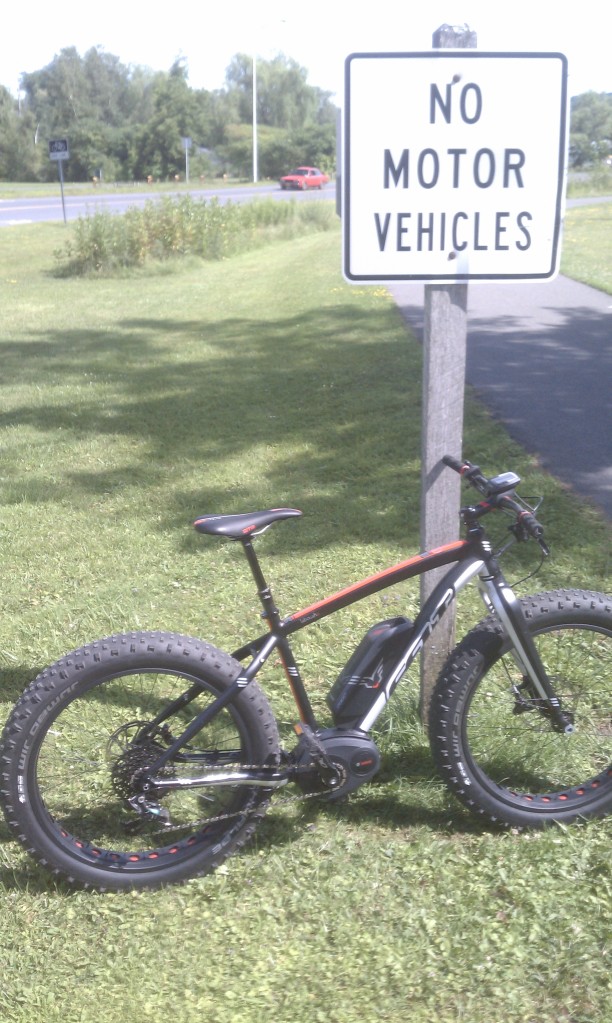 A refined ride for a discriminating fat-bike enthusiast…not a hooligan bike.

Got a chance to demo the Felt LEBOWSKe today. I rode it around on some pavement and through the grass, over some big roots and up and down a few small hills. By no stretch of the imagination did I actually ride the kind of single-track I am used to thrashing my $1000 electric fat-bikes on, but I feel like I did get a good idea of what the LEBOWSKe could do.

You can easily fit a 5″ tire in the rear. I wasn’t crazy about the Schwalbe Jumbo Jim tires it comes with, I’d recommend the Surly Lou.

I’m a huge fan of mid-drives and the LEBOWSKe was the first electric fat-bike I’ve ridden with an X01 system from SRAM. The road gear is 10T and the granny is a 42T which gives a much better gearing range than anything else I’ve tried yet. That being said the 11 speed chain doesn’t look like it would hold up to the 120Nm of the BBS02 (about double what the Bosch system puts out). I’ve had many more problems with broken chains in the deep snow with my 10 speed than I have had with the 7 & 8 speeds. 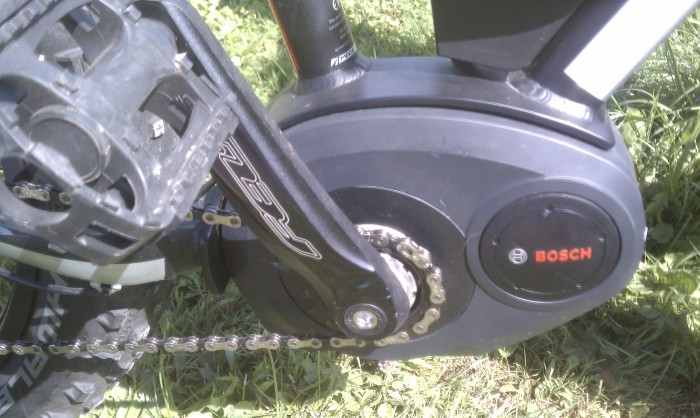 The Bosch system is not a system designed to appeal to degenerates. There is no throttle so you are deprived of the wheelie popping torque that I’ve grown addicted to on the granny gears of the BBS02. Even in Turbo mode you have to push the pedals pretty hard to weasel 400 watts out of the Bosch motor. The feeling is refined and seamless and it ‘feels’ like what most people expect single-track riding to be, just with more power than what you can really generate. The perfect bike for the kid always picked last in gym class (that would be me).

The front fork begs for a Surly Bud. This fork will fit any fat-bike tire currently on the market.

I’m not really a Bosch fan even though I’m actually ‘Bosch Certified’ for whatever that is worth. Their system does not allow you to modify the programming like you can with the BBS02 and the battery shuts off if the temps fall below 32 or over 140 degrees Fahrenheit. The average temp in Ithaca is 40 degrees and it’s not uncommon for me to be riding in well below 0 degree weather. The Bosch system is completely closed, you can only use Bosch chargers and Bosch batteries with the Bosch drive-train system. The Bosch batteries are not very cost-competitive for their performance and it’s unfortunate that you have to use their chargers which will only charge the packs to 100% of capacity (charging only to 80% can almost double your pack life).

The bike computer is small and discrete, but unfortunately the battery and drive unit are not. When the tiny battery inside the computer dies you have to replace the entire computer. Lame.

For the $5800 retail that this bike runs I could easily build 4 electric fat-bikes with BBS02’s (check out my best build yet here for ~$765) and get 2 50v 20Ah batteries from China and still have enough money leftover to take my Significant Other to go see Mad Max several times. My fat-bikes would not be quite as light or as pleasant to ride but they would have over twice the power (750W Nominal 1200W peak) and batteries that would last a whole lot longer and would be a few pounds heavier. I’m sure there are people out there willing to pony up the cash for a Bosch system that might be a lot more reliable than the BBS02, but I’m just not one of them. I wouldn’t even pay that much for a car, my last vehicle purchase was less than $5000 (2001 Honda Insight with 130,000 miles) and that car paid for itself in less than 2 years with the money I saved in gas (it gets well over 55mpg). When it gets right down to it the two things I really care about are cost and weight. The Felt LEBOWSKe is a winner when it comes to weight and riding feel, but a loser when it comes to the high price and lack of any real power. 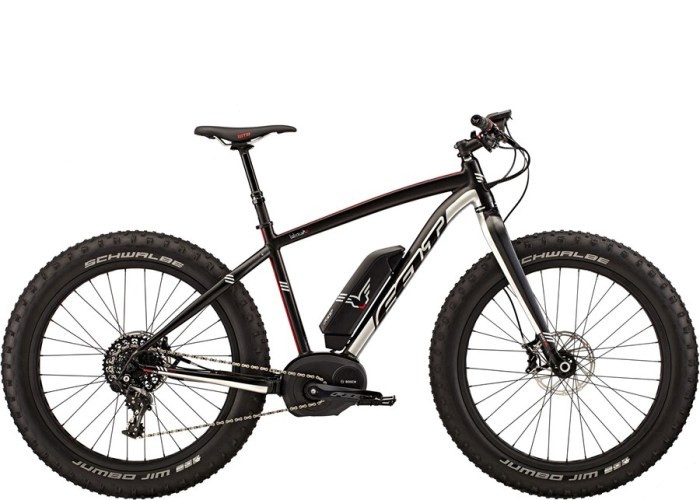 So Pretty … don’t let people like me borrow your bike. Ever.

For a ‘real’ review by someone who is not a jerk (he probably doesn’t even swear at people in cars every time he gets behind the handlebars) check out Court’s review on electricbikereview.com right here. He gave it a 10 out of 10 which must mean it is the best that any bike could ever be, forever! Court’s website also has a lot of nice specs on the bike that I don’t feel like stealing and just copying here.