If you have an ebike and you ride it at night then you need to have lights on it. There are lots of cool ways to light up your bike that are not restricted by DOT standards the way that cars and motorcycles are. This opens up tons of options for being creative with high power leds and mesmerizing color-changing light strips. The relatively tame lighting that I plan on reviewing in this article is the following.

All these units accept a variable voltage all the way from 11v-70v DC which means unless you have a very high power pack these lights will probably work for you. Although I’ve been migrating to XT60 connectors for most of my packs now, the Anderson Power Pole are still really cheap and easy to crimp on. For these lights I crimped the 30Amp Anderson connectors then used heat shrink tubing filled with silicone to make the connector more substantial and weather-tight. If you use XT 60’s then I recommend that you buy the ones with pigtails and solder them on and cover with heat shrink tubing. 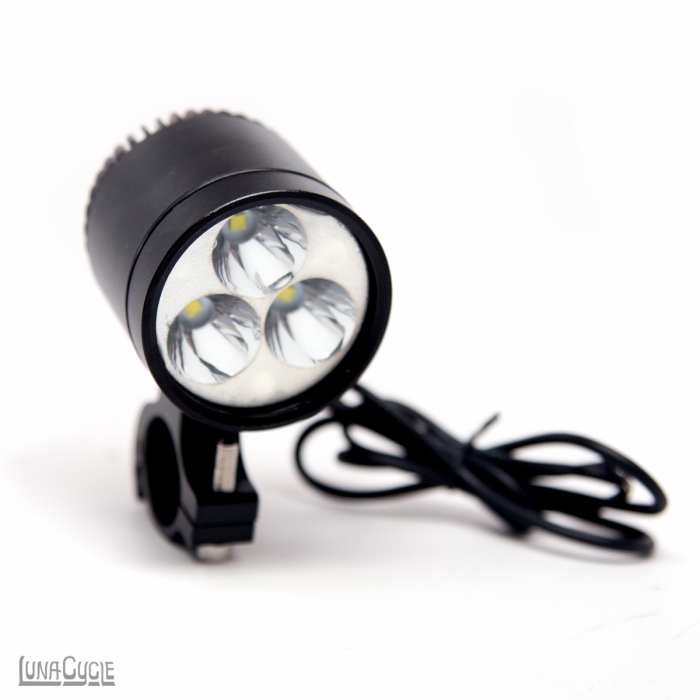 The 15 Watt Lunacycle Cyclops was my favorite of the bunch.

The only light that had heat issues was the ebay light. It would get too hot if you were not moving for about 20 minutes and air was not rushing across the giant heat sinks. The ebay light had a thermal shutoff and when the light would get too hot it would just turn off. This was annoying as there is no on\off switch on the light so you have to unplug and replug the power to the light once it has cooled to turn it on again. The other 2 cyclops lights seemed to have enough thermal mass to be able to run constantly even if they were not moving. The 15W Cyclops would get quite warm to the touch after about 5 minutes, the 9W Cyclops unit barely got warm at all.

The rear light did not generate enough light to get warm at all even without a heat sink.

Your wattage will vary based on the power of your pack. 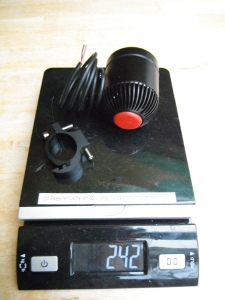 The 15W Cyclops was the heavy but also my favorite 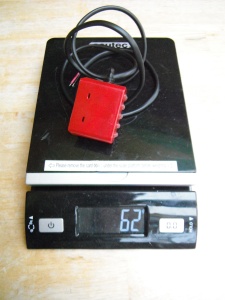 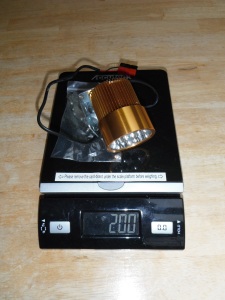 With the mounting bracket, the 20W ebay special was still the lightest and brightest headlight of all lights tested 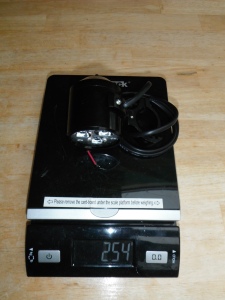 The 9W Cyclops was the heaviest of the bunch

I was disappointed that the rear light didn’t have a flashing mode. I felt like that should be a standard function on any rear facing bike light. The rear light was bright enough that it could be seen from hundreds of feet away, and for people looking directly at it (not at an angle) the LEDS were much brighter. 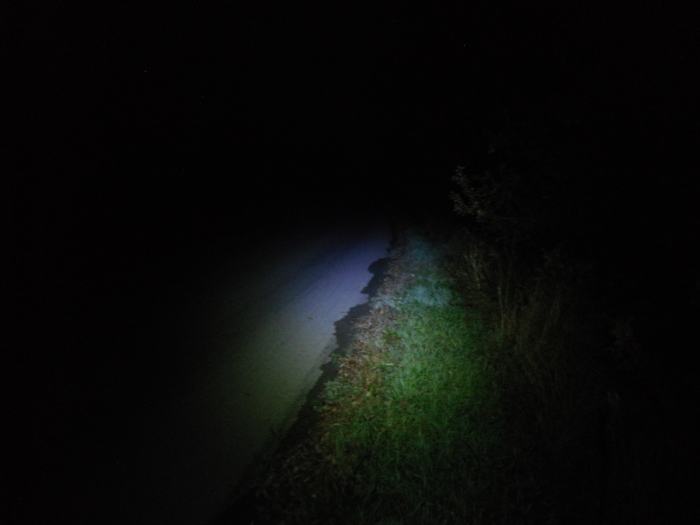 The 9 Watt Cyclops focused up close. 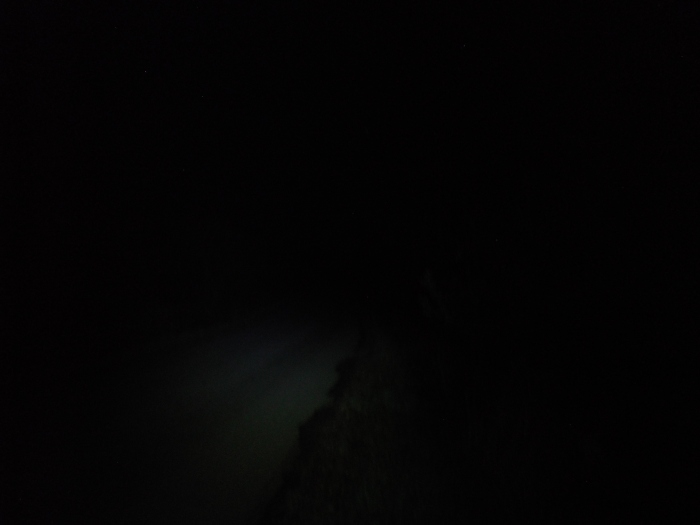 The 9 Watt Cyclops focused far away, the light ran out of power before it could get very far. 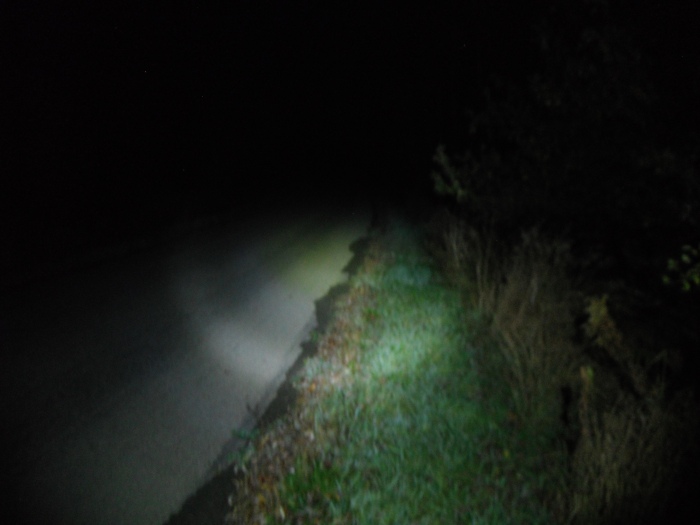 The 15 Watt Cyclops focused up close 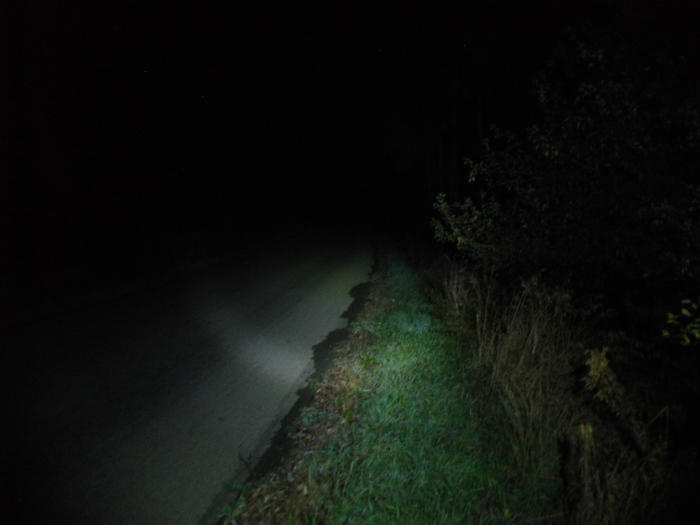 The 15 Watt Cyclops focused far away, this light was more diffuse and worked surprisingly well at a distance. 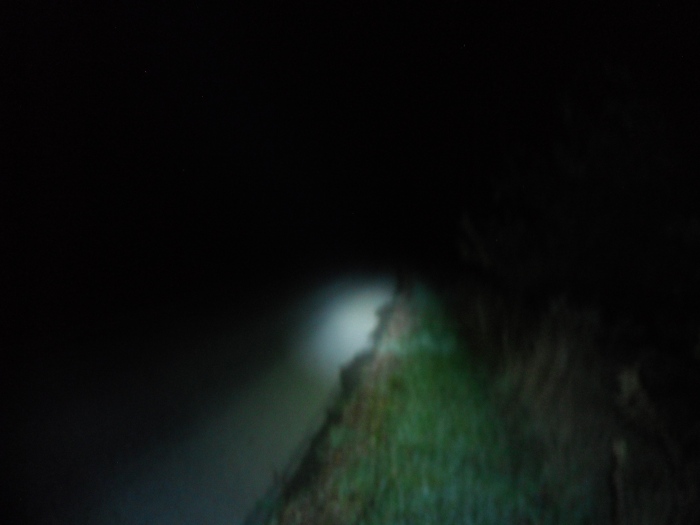 The ebay light focused up close 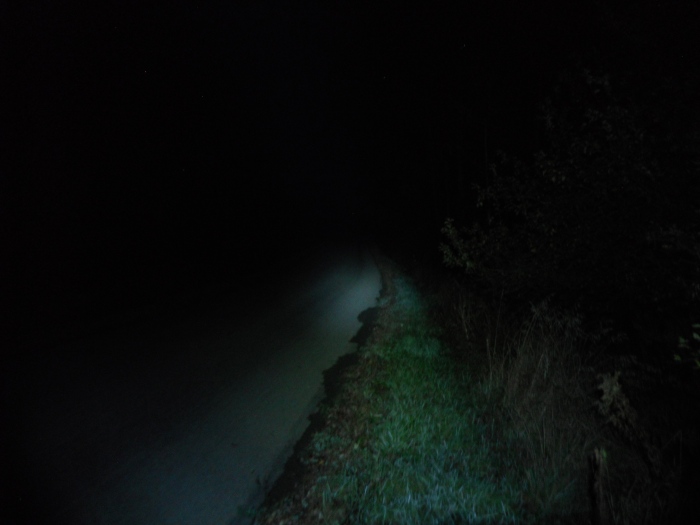 The ebay light focused far away, a very narrow beam that went much farther than the other 2 lights

The Cyclops and the Rear lights all looked completely weatherproof. The ebay light had a small hole in the rear that is easily plugged with silicone that would make it much more weatherproof. The rear LED light circuitry was completely packed in potting material so it is highly unlikely that any water would sneak in and short it out.

We recommend that any pack you run with your ebike always has a BMS with short protection. They are just too dangerous to run without it.

All three lights had mounting options. The Headlights had a clamp that would tighten down on the handlebars, the rear facing light had zip ties to attach it to the seat post or seat tube. The mounting brackets all were on the large side and I would recommend that you cut a short strip of old bike tube and wrap it around the handle bars before you clamp the light down. This will keep the light pointing in the direction you want it pointing even over bumps. I would not recommend mounting any of these lights on your helmet as looking at cars will seriously blind the drivers even from very far away.

The screws that came with the ebay special did not work with the clamps provided which was annoying to say the least. I’m sure the light that you buy will work just fine though. 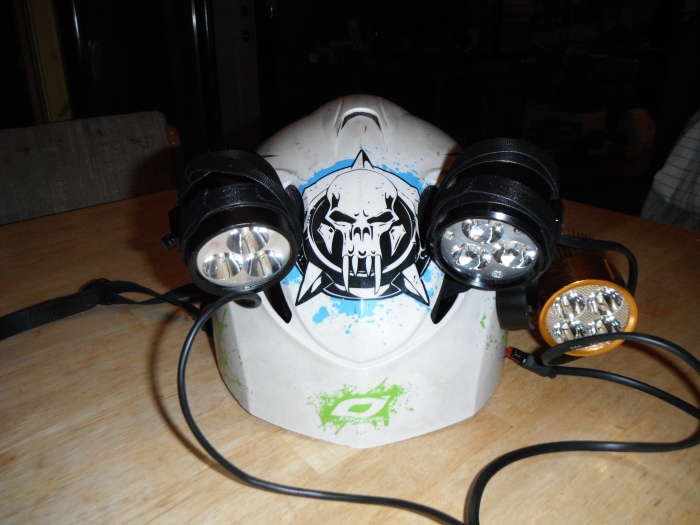 The testing rig. It was insanely bright with all 3 lights operating at the same time. My 15-year-old $25 brain bucket. When you’re trying to save money, safety equipment is always the best place to cheap out.

The ebay special had the brightest and most directed light beam at the cheapest price and the lightest weight. The only disadvantages were the lack of an on/off switch and the way the light would overheat after about 20 minutes of not moving (which would probably never happen). The 15W cyclops was the best made and produced a very bright beam that went very far. The 9W cyclops was noticeably less bright and would possibly make a decent option for the budget-minded shopper who didn’t want to blow $50 on a headlight although I’m not going to recommend it. The $15 rear facing safety light was a must have for any ebike and was cheap enough to use instead of the nearly useless normal bike reflectors. 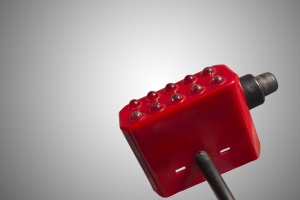 $15 to not take it in the rear from a motor vehicle?

What am I going to use? I’ll throw in the 9W Cyclops with the next ebike I sell on craigslist. I like the ebay one so I’ll keep it mounted on a helmet because it is lighter than the other two and has a very directed beam. I can throw it in my backpack and just hook it up with velcro in 30 seconds and plug it into the charging plug if I need a headlight. The 15W Cyclops I’ll permanently mount on my main commuter as it has earned its place on the handlebars. 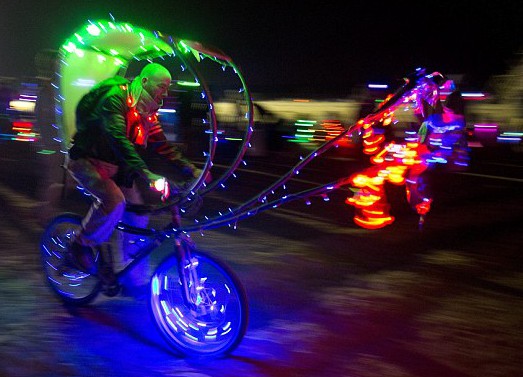 Light up your bike at night, like they do at Burning Man … because you can … and not get harassed by the man.

6 thoughts on “Bike Light Smackdown – The Brightest And The Best”