I tend to be extremely wary of most Kickstarter e-bike projects, and over the last several years there has been a lot of them that have come and gone. One project that has got me pretty excited is the new GeoOrbital wheel that showed up on Kickstarter 2 days ago and already has over $200,000 in pledged funds. The GeoOrbital wheel is a unique design that works like a friction drive where the motor and battery are mounted inside the front wheel. The outer rim rotates while the motor and battery remain stationary just like the light cycles from Tron. The current funding level is at $649 for a wheel, but it looks like that funding level will be gone soon. 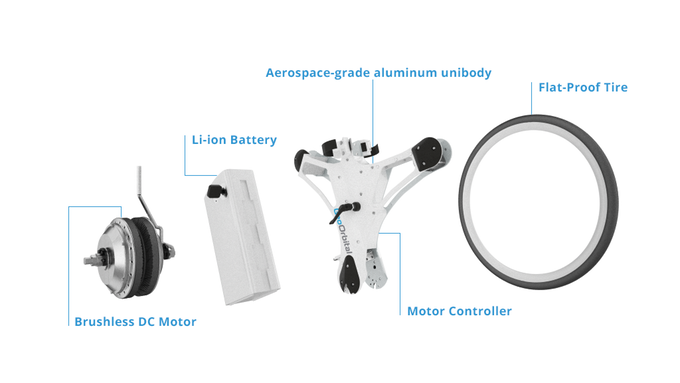 The design seems very solid and includes a foam filled no-flat front tire, as well as a rubber friction strip mounted on the inside of what appears to be a normal geared hub 500W ebike motor. The lithium  battery case also looks like a standard Chinese design and I’m sure it comes with a BMS and also locks in place with a key. In the Kickstarter video they are saying they need money so they can assemble this product in the USA. It looks like the major components of the e-bike will be manufactured in China (motor and battery) so if this product wants to be successful they will need to be sure to source high-quality components. I’ve ordered some pretty crappy batteries, motors and chargers from China over the years.

It looks like the 700c wheel is about 3 lbs heavier than the 26″ wheel and has a much larger battery. The commitment levels don’t mention anything about extra cost when selecting a wheel, so if I was going to nab one I’d probably opt for the 700c wheel. One of the nice parts of this design is that you won’t need a torque arm on your dropouts since the wheel attaches about 1/2 way up the front fork with velcro, which looks a hell of a lot nicer than hose clamps. 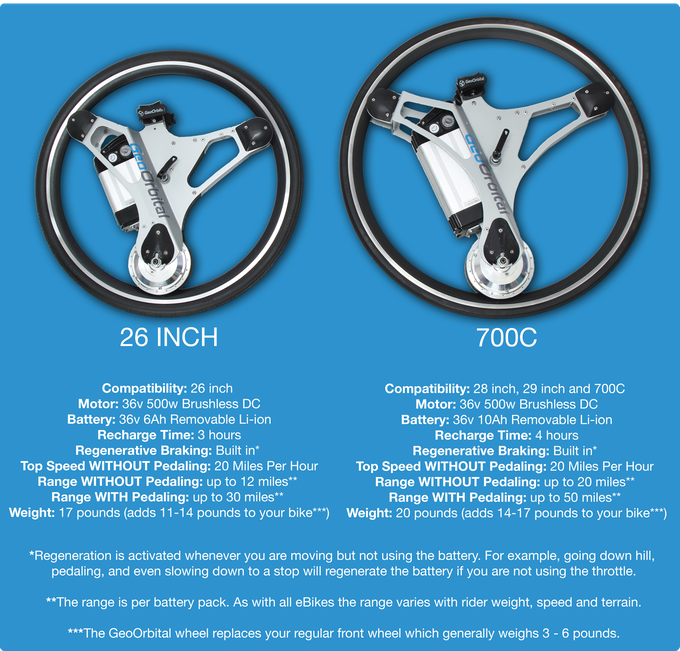 I have to admit I really like the way they have broken down the range of the system into ranges with and without pedaling and I have to say that they are relatively realistic for that size battery pack. I’m not sure that you’re going to find many front wheelsets that weigh 6 lbs (unless they have a fat tire on them) but since the weight of the GeoOrbital wheel is stationary and not rotational it’s really not that big of a deal. I think it would actually be better to have more weight on the front wheel if you have a FWD ebike as my front wheel motored 350W Giant Twist does tend to spin out in the rain when going up hills.

It should also be noted that bikes sold as 29ers are essentially fatter rimmed 700c wheels, they are one in the same. This is a distinction which is lost on most bike consumers. You should be able to adjust the rim brakes on almost any 29er to work with the GeoOrbital wheel.

Be aware that if you have a bike with disc brakes that this setup will not work with your bike. You may have to remove your caliper so it won’t interfere with the frame of the GeoOrbital which will leave you without a front brake. Riding a 20mph ebike without a front brake is just plain stupid. I’m quite certain that this system would work with a front suspension fork as long as it had rim brakes. Normally I would NEVER mount an ebike motor on a front suspension fork out of fear that the dropouts would rip out, but the way the Geo Orbital design works there are almost no twisting forces directly on the dropouts due to the velcro fork attachments 1/2 way up the fork. The GeoOrbital also will not work with through-hole dropouts and only with normal quick release or bolted-on front wheeled bikes.

One of the cool features of the Geo Orbital wheel is that you could actually relocate the battery pretty easily to the frame, or even overvolt the 500v drive motor to 48v which would make it a lot better performing, but of course that would void the warranty. You can just run a frame battery or pack using a cable and connect it to the controller using your own connectors. I have a 24v Giant Twist commuter ebike that I have been running at 36v for several years now without issues. The GeoOrbital wheel is for commuting only, and would pretty much suck at any singletrack trail riding for a whole bunch of reasons that should be immediately obvious.

One final note is that spokes create the strength and form of your wheel. Although they look tiny and skinny each spoke can absorb a tremendous amount of tension before breaking. It’s a well known fact with bridge design that you can use much less material building a bridge using cables under tension than you can if you are building a bridge out of metal and concrete only and the entire support system is under compression. This wheel is supported entirely by compression, so I would guess that if you hit a big pothole at 20mph the odds of bending the rim are much higher than with a normal spoked bicycle wheel.

An early prototype of the GeoOrbital

I have to admit that I am sorely tempted to get one, just because they look so damn cool. Unfortudently, my ebike shed is already filled with 15 ebikes, most of them mid drives and the only bike I have that would fit this wheel has a carbon fiber front fork. I can’t say that I think it’s a good idea to mount a 500 watt motor on a carbon fiber fork (and safety is my middle name). Nor can I say that I think it’s a good idea to support crowdfunding as you’re basically gambling with your money even though it looks like you’re just buying a product on Amazon. The cost to ship this wheel legally is going to be around $60+ within the US and there is no mention of additional shipping costs which might be cause for some concern.

If I was going to gamble with my money, the GeoOribital wheel would be #1 on my list.

4 thoughts on “The GeoOrbital Ebike Wheel : Turn Your Bike Into A Tron Lightcycle”