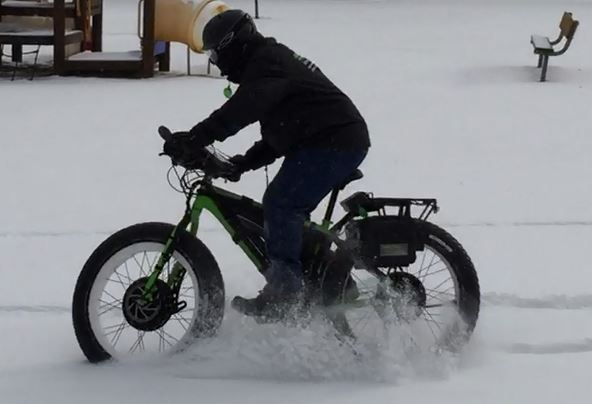 The kit will be based on Crystalyte H35 motors found on this AWD Fatbike with a believable claimed top speed of 42mph. Shown here plowing through a horrendous 2 inches of snow.

My friends over at Human Electric Hybrids (Actually that is a gross exaggeration, I don’t really have any friends and I don’t even know them) are going to start selling a 2WD Fatbike conversion kit that might not totally suck. It will be based on their 2WD fatbike shown based on the bikes direct Phantom FB4 Comp. They are too lazy to update their website with the proper information, although if they ever do it will most likely show up here.

The EFB 5 0 Dozer, finally an electric fatbike that might be functional (just don’t check the price tag on it $6299 + tax/S&H). They are releasing this as a kit so you can build it up yourself on a donor bike.

This kit will be based on their 2WD bike with double massive Direct Drive H35 Crystalyte motors and double massive 20Ah lithium battery packs. Don’t let it fall over on your leg though, you might have trouble standing it back up again.

The Crystalyte motor is one of the more powerful direct drive hub motors you can buy. These work well at high power, but one of the biggest problems I have been finding plowing though 6 inches of snow eats up watts like you wouldn’t believe. Also the motor can generate some serious heat especially at low speeds when you’re just getting moving. This bike looks more appealing than anything else I’ve seen that is marketed as direct drive, although the weight puts it firmly into ‘light motocross’ class. I can’t tell you how it rides because they would never let a degenerate like me destroy their equipment.

H35 is second from the right dwarfed only by The Crown.

The website has some great kits designed for dirt cheap Walmart fatbikes. I like the idea, but many of them are Front Wheel drive systems which are pretty much useless for anything except commuting. They also talk about going 40mph on a $169 fatbike which I wouldn’t do. I’ve kayaked over 40′ waterfalls in Costa Rica, jumped out of a lot of perfectly good airplanes, regularly jump 40′ in the air when kiting on water and used to run class V stuff backwards so I didn’t get bored. I still wouldn’t ever try to go 40mph on a Walmart $169 Fatbike. Besides the obvious reasons (the brakes are inadaquate), the friction of the tire and the tube is going to melt the inside of the tire down to the cords. If you want to go that fast you need to get a tubeless light duty moped or 40mph ebike specific tires that will do it. Get some decent health insurance while you’re at it.

It looks like the Fb4 Comp has 135mm front dropouts and 145mm rear dropouts so the kit should fit any fatbike that has similar spacing, or if the frame is steel you can bend it with relative impunity and just make it fit. The specs on the bike at Bikes Direct call for a freehub which seems strange (the Crytsalyte will have a freehub as well), but you can try to figure it out for yourself here.

Thanks to Spinning Magnets who thinks that a front wheel drive 40mph Dolomite is a great way to keep the gene pool clean.