My 7th time out on my AWD Reaper I was bogged down in 8 inches of heavy wet snow dumping 2400 watts into my drive system (1200W front and 1200W into the BBS02) while not really moving much at all when I noticed my front wheel had jammed up. Upon closer inspection I realized that 3 of the 6 torx screws had come out and the other 3 had half come out. The motor had started to separate about 5mm and the 1/2 way ejected screws hit and shredded my beautiful and expensive BB7 Disk brake. Even at a measly 25 amps the jammed up motor ended up melting the phase wires on my Lyen controller in about 5 seconds.

Don’t let this happen to you! Blue Locktite your 12 torx screws on the Mac and FatMac motors.

I spoke with Paul about this problem and he said many people had complained about locktited screws getting stuck and stripping out on customers which is why he doesn’t do it. Another good alternative if you’re scared of blue locktite is to use countersunk lockwashers as shown at Mcmaster Carr stainless steel here or cheaper zinc plated ones here. Don’t ever use red locktite unless you never want it to come apart again.

We send them with Loctite and customers complain they can’t remove the bolts (or round them) and then they can’t open the motor, so whatever we do, we can’t win. When we send the motors disassembled (which is what we do much of the time), we should include a bottle of Loctite? When Mac supplied them with Loctite we had huge problems getting some of the bolts out and would often have to destroy a cover after rounding a bolt. It’s a simple thing, that is not quite as simple as you might think. If you are buying bare motors from us and want Loctite added, make a comment at checkout, we’d be happy to add it. 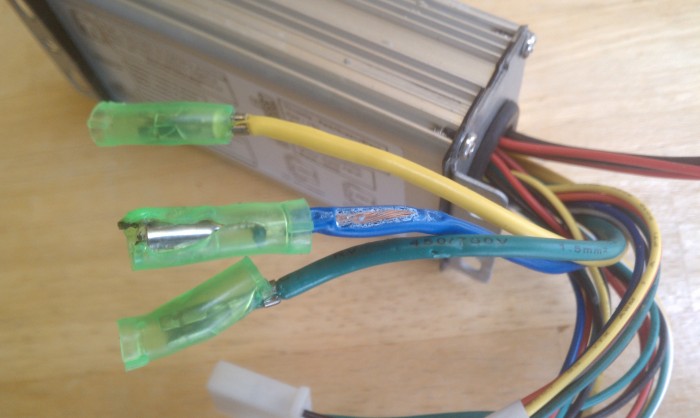 When the motor is jammed up and you keep dumping power into it this it what you get. It’s been a tough week for my ebikes.

Paul responded quickly to my request and is working on trying to find a solution to this problem possibly using lockwashers. Until then I would recommend taking matters into your own hands and lock-titing or lock washering your existing torx screws for already purchased Mac\FatMac motors.