Bike Racks come in all different shapes and sizes and each one has different benefits and drawbacks when dealing with transporting electric fatbikes. 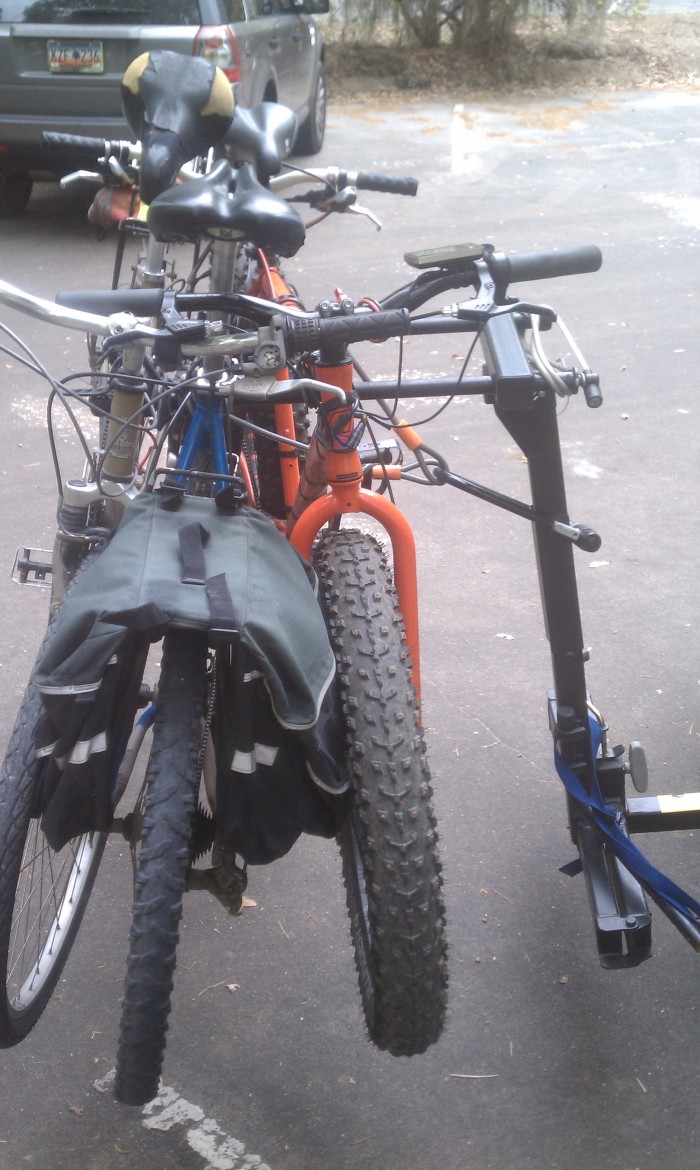 Bikes can slide together and cause a lot of damage to the paint if the mounting points don’t have enough resistance and slide together. That was my biggest complaint for this Thule rack.

Electric fatbikes have special requirements when it comes to racks

The best way to deal with the extra weight of your electric bike is to remove the battery when transporting it. Removing the battery is by far the easiest way to shed weight and you should consider making your battery easily removable when you are designing your electric bike. I’ve had good luck getting hitches that support 4 normal bikes and carrying only 2 electric bikes on them or 1 electric bike and 2 normal bikes. The racks are rated for weight so make sure you understand what weight your rack can carry before you overload it. Don’t even think about overloading the rear-hatch style bike racks that press against your rear windshield. If you load 200 lbs of ebikes on that you are begging for disaster. A rear hitch mounted system usually support 150-200 lbs and a decent roof-rack (Thule or Yakima) can often support up to 200 lbs. Factory aero-roof racks that come with cars generally are only rated for around 50 lbs or so evenly distributed. You have been warned.

The only fatbike specific rack I know if is the Thule Fat Tire kit which works with their 919 racks. $50 gets you 2 tire adapters which is enough for one bike and it works with the T2 Hitch mounted Racks. I’m way too poor for this option as it runs close to $500 for 2 bikes, however most roof style racks like the Yakima Raptor can hold fat bikes if you replace their crappy wheel tie-downs with some velcro ski straps to hold the over-sized tires in the channel. 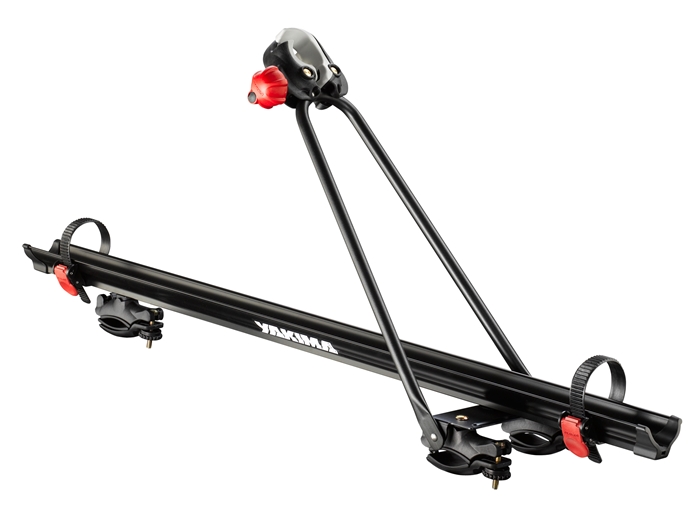 The Old-school raptor is a good choice if you are strong enough to heft your electric fatbike onto your roof and don’t mind losing a few mpg from the added drag.

A good option for the triangle is to use a triangle battery bag. This puts your battery in the best place on your bike possible (other than your back) and still allows it to be easily removable. Em3ev sells a battery bag as well as triangle shaped batteries to fit in it. The bag is only $35, the triangle batteries are a quite a bit more than that. The battery bag is padded so you can buy cheap Hobbyking lipos and saran wrap them together into a triangle sort of shape for a poor-mans budget battery.

I’ve spent well over $3000 on roof racks, bike racks and cargo boxes in the last 25 years. Although I used to be a devout Yakima fan, their quality has dropped off in recent years and I’ve switched over to buying Thule and other budget brands. I’ve had a few problems with Thule racks as well, but fewer problems in general than with Yakima. Although I’ve used a standard hitch mounted Yakima Double Down 4 but I don’t recommend it at all. The bolt that holds the upright up gets very loose after the first year and the whole rack swings almost a foot from one side to the other. It also rusted into my hitch after 3 years even after rust proofing it with POR-13. Now I can’t remove it at all even after heating it up with a torch and driving away with the hitch chained to my silo at 15 mph it just wouldn’t come out although the impact was so jarring I’m surprised the airbags did not deploy. For a $210 rack (with shipping & tax from EMS) I expected much higher quality and more than 3-4 years of use out of it. Two thumbs down. 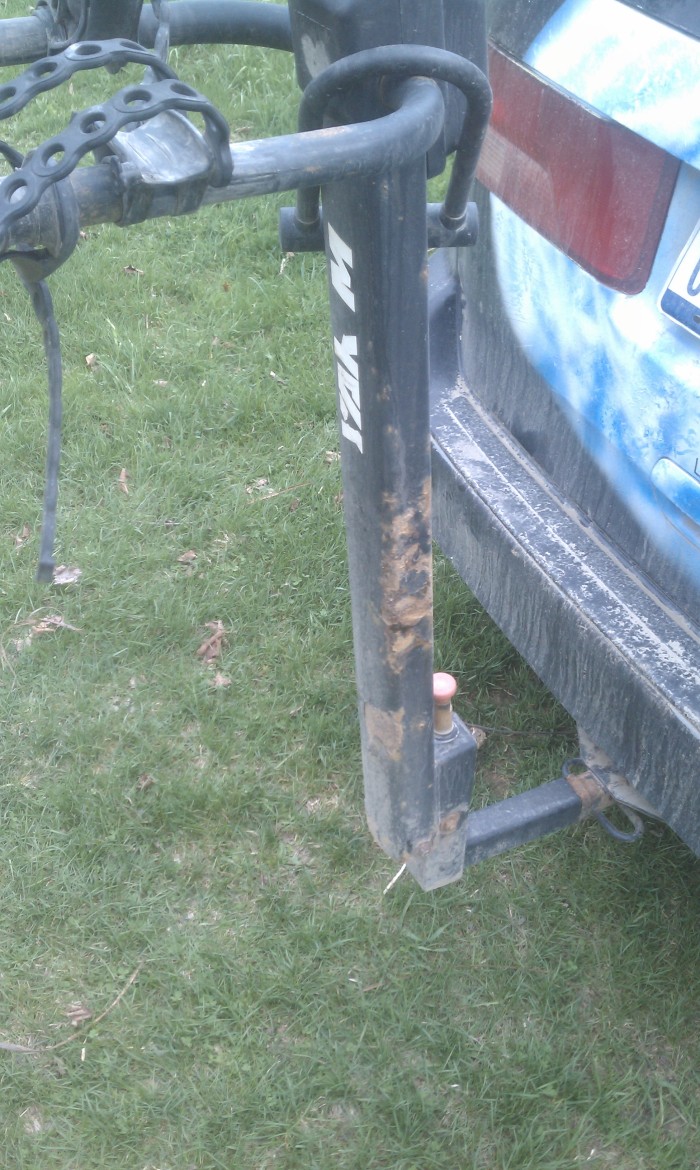 Double down 4 after a 4 years of use, I wouldn’t recommend this rack except to people I didn’t like. It had to survive one winter in NY because I couldn’t remove it from my van anymore.

The Thule Spare Me works extremely well if you have a spare tire to attach it to on the back of your vehicle. This rack seems easily able to carry much more weight than what it is rated for and doesn’t sway hardly at all. I have no complaints about this rack, we got ours on Fleabay new for about $89 in a bashed up box (Retail $219).

The Thule slide-away rack we borrowed to test on a 2 week trip was a decent rack with some serious design flaws. It was a great rack and you could slide the bikes about 3 feet away from the rear doors of my sprinter without removing the bikes which was really convenient. The rubber mounts that the bikes attached too slid around too much and the bikes ended up sliding into each other and rubbing all the paint off the frames in places. Most people would find this infuriating, I was only mildly annoyed. I would not recommend this rack even though it felt very solid with heavy bikes loaded on it.

Your paint will wear away if the bikes rub together on the rack.

Although I haven’t bought or tested one the Swagman 64663 ($203 shipped) gets very good reviews and the tire holders will support tires that are up to 3.5″ wide. That would work for a Deadeye monster or most other 4″ tire bike (the tires aren’t actually 4″) with 50mm rims but won’t fit fatbikes with 4″ tires on 80mm rims. It won’t work with any tire that is larger than 4″ so it’s just not an option for me. That being said it is less than half the cost of the Thule T2 with the Fat bike tire options and is the only other tire-held option that I can find that looks the least bit affordable.

This Swagman rack has unusually wide tire holders that will hold up to 3.5″ tires. It’s also inexpensive at $203 shipped.

The cheapest slide away rack I could find that supports the bikes with the top tube is the Heininger 2110 glideAway2 Deluxe 4 for $129 shipped. This rack supports either hitch size 1 1/4 and 2 which is important to me and supports 150lbs which should work fine for 2 ebikes or 2 normal bikes and 1 ebike. This is the rack I ended up buying because I couldn’t justify paying $500 for a Thule or Yakima slide or swing away that looked to be only nominally better. I’ll post an update review on this page when I get a chance to use it for a few months.

After much deliberation this is the rack I settled on, $129 shipped.

The Yakima Raptor is an excellent roof mounted option for fatbikes if you can heft your bike up to your roof without breaking your back. It will wobble enough to make you nervous but if mounted correctly it won’t let go of your bike at 70 mph. It will hurt your mileage quite a bit though. You can find these for pretty cheap used on ebay.

There are plenty of light motorcycle hitch mounts like this one that will generally support up to 600 lbs or so in the $125 range. This is a total overkill for any ebike even with the batteries left on the bike. You also need to secure the bike with 4 racheting straps which is a real pain. These racks only allow you to have one bike on your car at a time and generally do not tilt down or away to access the back of your vehicle. An impractical choice by all counts but worth mentioning as they will easily accommodate a 5″ tire and the weight of an ebike. These racks also stick out beyond the sides of your car quite a bit so you’d have to be careful not to catch it on things.

In the winter the last place you want your nice bike is on a hitch mounted rack. The salt will quickly destroy the gears, chain and rotors. It’s better to have the bike on the roof, but the best place to keep your bike is inside your car. I have a 2001 Honda Odyssey with 212,000 miles on it as a winter rat and I line the bed with foil bubble-wrap insulation which does a great job of catching all the melting snow and then I just load the bike into the back through the rear hatch it keeps the bike cherry. When it is below about 20 degrees F at night I bring the bike inside at night and have a couple of boot trays that the tires sit in to catch the melting water. Bikes are not designed for the freeze\thaw cycles and negative 0 degree F temps. If you leave your bike outside at night expect to deal with frozen up bearings, thick bearing grease, frozen chains, frozen derailleurs and frozen brake-lines. If you can’t afford a cheap minivan as a winter rat then just pull the front tire off and stuff it in your trunk or your backseat. Your bike will thank you for it. 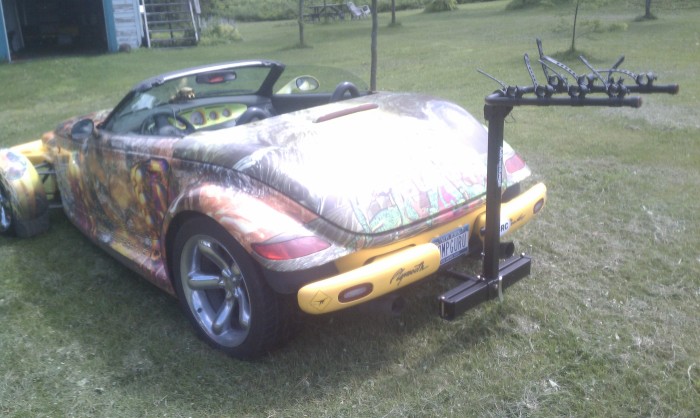 The Glide-Away on my uber-sexy Prowler.

Update: I am very satisfied with the Glide Away 2 Deluxe 4. The construction of the hitch is much better than what I would expect on a $129 hitch. It does not sway much even on a 1 1/4″ hitch and the components seem to be made of rust resistant steel.

4 thoughts on “What’s The Best Way To Transport An Electric Fatbike With A Car?”