I’ve been doing a lot of thinking lately about possible improvements to the BBS02 & BBSHD mid drive units from Bafang and decided to organize all my ideas here.

The BBSHD is a step in the right direction but still comes up short.

The improvements are listed below with a rating between 1 and 10 with 1 being things we can live without and 10 being improvements that they should have done a long time ago.

Are you ready Bafang? Pay attention, there will be a test.

Although Bafang has a drive unit that fits into a Bosch-style custom dropout located here they do not have a torque sensing drive unit that mounts to a standard BB on a normal bike like the BBSxx drive units. Their G33.350 unit only produces 250-350 Watts and is designed for the Euro-limit low power market not the high power offroad US market. A torque sensing drive unit that peaked out at around 1500-2000 watts would sell like hotcakes in the US. No one else has this right now and as far as I know no one is working on one either (although all of them should be).

Bafang’s torque sensing wimpy 350W drive unit that will absolutely not fit in a standard bottom bracket so don’t even try.

In my opinion this is one of the greatest failings of the BBS unit, a bad reduction ratio. When single-track trail-riding the peak power of the motor is produced when the cadence speed is impossibly high and there is just no way to keep up with it. This happens because the motor does not have the proper reduction. 1:22 is just not enough and it should be closer to 1:30. The little fist sized motor they use with the BBSxx really sings at much higher RPM’s and it strains way to much with a 1:22 reduction most of the time. I’ve watched the power consumption closely and it doesn’t use that much more power when it is spinning fast, but it does produce way more torque.

If they had a version of their drive unit with a longer stretch between the axle and the motor then the motor could be mounted on frames that have a curved forward down tube or other non-standard frames. This would allow people with curved downtubes to mount a BBSxx without having it hang down like a cow udder. People with normal downtubes that wanted to use the bike for trail riding could also opt for this unit to keep their motor up and out-of-the-way so it wouldn’t get smashed on every log they ride over.

You can start with that stupid steel chain wheel. Nothing is more important to the US ebike consumer than price, weight and power. The BBSxx drive unit is just too damn heavy, go on a diet.

The cost to machine something similar to the Lekkie Bling ring (review here) would cost very little in China and would reduce the weight by 330g or more. You could even offset a lekkie-style ring a few more mm back towards the frame of the bicycle (every mm helps). Any chainring you sell for the BBS02 should have Narrow\Wide teeth similar to the Lekkie & the Raceface Narrow\Wide chainrings.

Although the BBSHD will come in 2 flavors there is still not a 100mm BBS02 drive unit and people are forced to buy a 3rd party axle swap-out and drive unit extension with 3 companies to chose from. This adds a lot of cost to the BBS02 drive unit and it should come from the Bafang factory with a 100mm case and axle.

There are at least 10 different adapter rings (or more) for sale from various vendors on the internet. Take the hint Bafang.

Almost every reputable US BBS02 reseller has made their own BCD adapter for the BBS02 and the prices range from $25 to $59 for most of them. How about just having BCD chain-ring bolts screw right into the wheel that currently holds the 5 mounting bolts for the chain-ring. If Bafang can’t do that at least they can throw in a lightweight aluminum BCD104 adapter with the drive unit so we don’t have to buy 3rd party chain-ring adapters to mount our chain-rings on them.

More power Scotty! I’m giving you all she’s got captain… – 8

The BBSHD only ships to allow 30 Amps which is only 5 amps more than the BBS02. Since they are now using a 12FET controller with higher quality mosfets and the motor was redesigned to take more amps you should easily be able to run 35-40 amps though that drive unit for short periods of time without destroying it. More power means more weight and more copper but it is a price we would pay gladly. The ability to easily plug in an external controller would allow the installer to decide how much power they want to dump into the motor. Right now that is difficult to do, but not impossible.

Replace the nylon primary reduction gear with a composite gear – 9

It’s one of the main weak points of the drive system and this replacement would be cheap and easy and not add more than a few grams to the weight of the unit. Nylon is an inappropriate choice of materials for this gear.

The C965 already has a temp display, although it is far too small to read and it only shows the ambient outside temp which is useless information. The display should show the temp of the inside of the controller or drive unit so the rider can make sure not to overheat the unit. It’s a pain to have to install at temp probe on every drive unit I buy.

The Cycle Analyst v3 does this, there is already a temp sensor in the controller. It should be a simple matter to implement this and would not add hardly any cost or weight. Why does this drive unit not have this feature? In fact while you’re at it you might as well make your drive unit compatible with the CA v3.

Several of the displays support a headlight function but there has only been one batch of BBS02 500w that I know of that has ever shipped with a headlight connector on it. Why not make it a standard feature. It should also be 48v or whatever the drive unit is running at not 6v which would allow people to mount a very powerful headlamp.

The newer BBSHD controller is confirmed to be a 12FET controller (BBS02 9 FET controller shown) and should have the higher quality mosfets. If it doesn’t we riot.

It seems that Bafang has already started doing this with newer 750W BBS02 motors, they should keep doing it with anything over 500W rating on it and for all new drive units regardless of the extra costs. Better mosfets run cooler and can take more peak power which means fewer fried controllers which is the biggest problem with the 750W BBS02.

One really nice feature is the gear shift sensor that Lectric Cycles bundles with their e-Rad branded BBS02 drive units reviewed here.  The e-Rad drive unit already ships with the correct Higo style connector and the gear sensor already exists although Lectric has the sole US distributorship for it (available here). The BBSxx drive unit should have had this option from the beginning.

Bigger fins on the aluminum case, but not on the bottom – 7

Nothing cools a drive unit like big fins, but anything on the bottom of the drive unit will get smashed off when trail-riding over log-piles. The BBSHD moves in that direction but frankly the fins could be even bigger. Big fins go faster.

I do smash my drive unit on logs from time to time and it would be great to have a small piece of minicell foam that is about 1 cm thick with a thin sacrificial metal plate over the top of it to absorb the hits without transferring all the force of the impact into the drive unit. 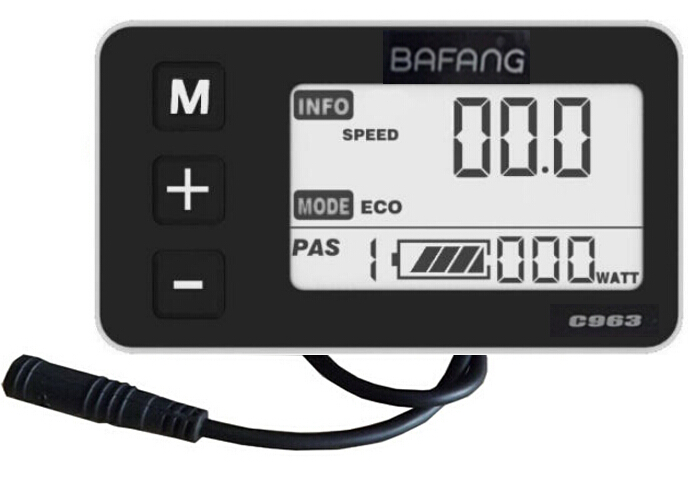 The C963 is the only display where the watts are printed big enough to actually read. Unfortunately the C963 can only provide 5 levels of PAS instead of 9 like other displays.

It would be a simple matter to add a ‘fuel gauge’ to any BBSxx display showing how many Ah had been used from the moment the unit was plugged in. When the unit goest to sleep it should not lose the Ah rating, only when the battery is unplugged entirely. The watt meter on the C965 is too small, the C963 has a more appropriate size for the Ah meter. A ‘fuel gauge’ Ah meter text display should also be about the same size. The battery level gauge is nearly useless as with Li-Ion batteries the voltage drop off is brutal and fast when the battery actually runs out. Everyone knows the Ah rating of their packs though so a Ah meter would be insanely helpful for planning your trips and energy usage. The C961 should no longer be sold as it does not have a watt meter at all and is the runt of the BBS02 display litter. 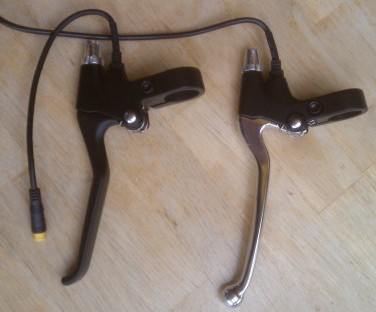 The smaller ebrake is still way too big but at least it doesn’t look quite as silly as the ebrake they used to sell.

Stop selling the Motorcycle Ebike brakes with your kits – Do you really need a #?

The older style motorcycle brakes are a complete overkill and look like crap on any bike as well as being too damn heavy. Every time I order a BBS02 kit and these brakes arrive with it I roll my eyes and groan. Please do not ever ship another one of these brakes to the US ever. We’ll take the much smaller much lighter ones that actually look like bicycle brakes and most importantly are painted black. Thanks.

A rare earth magnet with the speedo would be nice – 3

With a rare-earth magnet on the spokes not only is the weight lighter but you can mount the speedo much father away from the magnet. I’ve already broken off two speedos trying to get fat tires on and off the bikes and not moving the speedo out-of-the-way of the tire first.

Offset cranks should be included with every kit, at least for the non-drive side.

Offset non-drive side cranks shipped with the units – 6

A slightly offset crank-arm, especially on the non-drive side would be nice. I’ve had 3 frames where the non-drive side crank-arm hit the chainstay. It’s a pain to locate and buy these from a third part vendor although both California e-bikes and Lectric cycles both stock them.

XT90 is a nice tiny connector that is relatively watertight and also seems to becoming the high-power ebike battery standard connector. I’m also getting tired of soldering on my own connectors.

Fix the crappy programming from the factory – 10

Here’s something that wouldn’t cost any money at all and would be really handy for people who don’t want to waste the time and energy programming their own controller. The stock programming on these drive units just sucks and every reputable vendor has their own programming that they sell these units with. At the very least just give us full throttle without the PAS being active on PAS0 so we don’t have to disable the PAS system or reprogram the controller to make it work. I don’t feel like that is too much to ask.

Do you have any ideas on changes you would like to see to the BBSxx drive units from Bafang? Feel free to leave your ideas in the comments section and if I deem them worthy I’ll even add your ideas to the article and claim the credit for myself. Because that’s the kind of guy I am …