I’ve been waiting for a long time for Santa to deliver me a chainring that wasn’t 558g didn’t look like it was designed to be the primary drive gear of an early 1900’s model T like the crappy ring that Bafang sends you for free with the BBSHD. Eric from Lunacycle.com sent me one of the first production Luna Eclipse chainrings for the BBSHD and I have to say it is a total work of functional art. This chainring is machined in the US out of a solid chunk of high quality 7075 aluminum and is available for $99 on the lunacycle.com website right here for any customer who has bought a BBSHD from Lunacycle.

Custom designed for the new BBSHD this chainring is a MUST HAVE add-on (noticed how I capitalized that? Subtle.)

It weighs about what a chainring should weigh at 240g and looks the way a $100 chainring should look. Totally awesome. The teeth are massive and squared off with the preferred narrow\wide tooth pattern which keeps the chain from falling off the ring.  The chainring comes with its own mounting bolts which are longer than the stock ones that come with the BBSHD and they also designed the chain wheel in two pieces so you can easily replace just the teeth when they wear down instead of the entire chainring. There are also going to be different tooth sizes that will be available as a bolt on option sometime in 2016. The offset on the Eclipse ring is far more than I’ve ever seen with any of the BBS02 chainrings allowing the maximum chain line correction for a drive unit that intrudes pretty severely on the drive side of the bike. This chainring is designed only for the BBSHD and will not work on a BBS01 or a BBS02.

The chainring comes in two parts so the teeth are replaceable when they wear out. Smart. You can also purchase and swap out larger toothed chainrings that will be available in the future for higher top speed\less torque.

When I was initially testing the steel piece of crap paperweight that Bafang calls a chainring on the BBSHD it seemed to work just fine on my 5.05″ tired Phat Phuk build (with 3mm of spacers on it). However, when I tried the stock Bafang chainring on My Little Bronie for my initial BBSHD singletrack testing I had nothing but problems. The chain was coming off about every 2 minutes and after about 10 minutes of riding I gave up and went back home because I was tired of putting the chain back on. When I got the Luna Eclipse ring I put it on My Little Bronie which had become the ‘problem child’ of my ebike collection. The Luna Eclipse ring fixed all my chain derailment problems and I can honestly say that even the hardest core singletrack trail rider is going to be happy with the 42T Luna Eclipse ring. On the BBS02 you were really forced into the 36T and smaller chainring size because if you didn’t run the BBS02 motor at exceedingly high RPMs on steep inclines it would just self-destruct. The BBSHD is a totally different animal and can produce a lot of power at much lower RPM’s that are more appropriate for pedaling without overheating or self-destructing. With a 36T cog cassette in the rear on a 26″ wheel with a 2.2-inch tire I could still climb 20 percent grades in the lowest granny gear with ease. In the highest 11T cog I was easily able to go over 30 mph on the level (but not over 35mph). Switching from the stock 46T ring down to a 42T ring is going to trim away some of your top speed, but it will give you a lot more torque in the lower gears. Believe me when I say that for single-track trail riding you just can’t have too much torque.

The teeth on the Luna Eclipse ring are much longer and much more square than any chainring I have ever seen on the market. Lunacycle spent a lot of time doing teeth research after the first prototype and this large square toothed design is the current cutting edge in chainring tooth design. Although I was worried about them being too long, they seemed to work perfectly. The chain made almost no noise in any gear and there was no derailment issues under severe load and while shifting under severe load (which you shouldn’t do unless you’re a professional gear grinder like I am). In all honesty, I have never seen a nicer chainring on ANY bike in my 15 years of obsessive mountain biking. It kind of makes you wonder why all chainrings aren’t built this way.

The newer chainrings have a super fly Luna logo engraved on the front. I love the machined away anodization, it looks amazing.

It takes over an hour on a three axis milling machine to produce just one of these rings. Although the first editions of the chainring do not have any logo on them, the later editions should have a logo on it and will also most likely cost a little bit more. Lunacycle has spent over a hundred hours on this one chainring design alone and has completely raised the bar for everyone when it comes to aftermarket chainring design for mid drive systems. I was involved pretty extensively in the design and encouraged them to push the offset of the chainring as far back toward the bike as it would go. You can always space the chainring out away from the bike, but it’s much harder to bring it in. For most bikes the stock Luna Eclipse should work incredibly well and probably won’t need a spacer unless you have a fatbike. 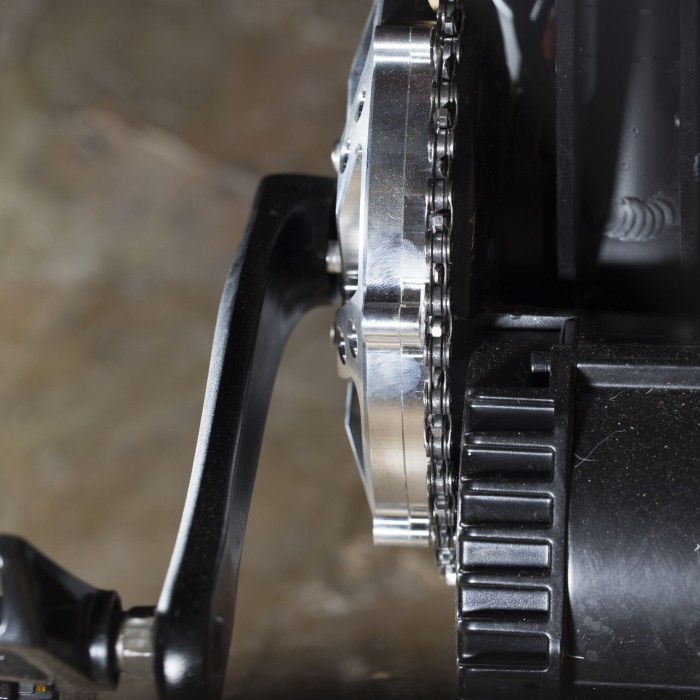 The clearances between the chainring and the motor housing are about as tight as you would ever want to get.

The Luna Eclipse ring was tested by me on a 9-speed chain but looks like it would work with everything from an 11-speed chain to a super wide single-speed BMX chain. I don’t recommend running 1500W through an 11-speed drive train though, as you’re kind of asking for trouble. If you are willing to risk it, there are some insanely large cog sizes with the new X1 series that I have seen go up to a 42T cog. A cassette with 11T-42T cogs is going to give you a very large gear range. In my opinion you don’t really need that much range. I have been extensively testing a Nexus 3 paired with a BBS02 and found that the range is more than enough for my trail riding needs. It is also really nice to not have to deal with frozen derailleur wheels in the bitter cold. I firmly believe that the Nexus 3 should have no problem with the extra power of the BBSHD and for a fat tired snowbike it is a smart solution.

This chainring weighs what a chainring should weigh, Bafang eat your heart out.

The only complaint I had about this chainring was that the prototype shipped to me without spacers. I had to use 4.5 mm of ground down washers hot glue gunned onto the back of the chain wheel just like I did in my Phat Phuk build in order to get the chainring to not hit the chainstay on My Little Bronie. Eric is working on spacers for this chainring and I am told they should be ready soon and will ship with the chain wheel for an extra $5. The spacers will come as 2.5mm or 5 mm one which will allow you to move the chainring either 2.5mm, 5mm or 7.5mm (if you use both) away from the bike to clear intrusive chainstays on many fat bikes. This chainring should work on many skinny tired bikes without a spacer, although it didn’t work on my FS 26er which had a very intrusive chainstay due to the suspension dual pivot design.

Eric has decided to produce this wheel in the US and machine it out of the high quality and expensive 7075 aluminum which means that he is making almost no profit off every chainring that he sells. In the future he could just send the design to China to have it knocked out in bulk, but for now don’t expect to be able to get this chain wheel for less than $99, it’s not going to happen. He has also decided to sell it only to people who have bought a BBSHD drive unit from Lunacycle as a way to add value to and differentiate his product in the market. I know of 2 other chain wheels in development right now from his competitors for the BBSHD, but for the time being Eric seems to have a substantial lead on everyone else.

If you’re looking to trail ride with a BBSHD the Luna Eclipse chainring is not optional equipment, but rather a must have. I have ridden the BBSHD pretty extensively and I can tell you with some certainty that you are not going to want to use the crappy stock Bafang chainring with your build.

When it comes to mid drives it really is all about having the right chainring.

Disclaimer: I did not pay for the Luna Chainring that I received from Eric but I did contribute a great deal of time to its creation. Merry Christmas to me. A decent chainring for the BBSHD was really all I wanted from Santa anyway.

UPDATE: I’ve discovered an another problem with having such a massively offset chainring. The recommended way to run this chain wheel on a singlespeed is with a chain tensioner. If you don’t have a chain tensioner and the chain falls off you can’t just put it on the cog then put it on the chainwheel and turn the crank. Because the chain has to wrap around the front of the chain wheel and it is so massively offset you will bend the chainwheel and/or bend or break teeth as the chain gets way too tight. Instead, you must take the chain off the cog and put the chain on the exlipse chainring then put the top of the chain on the cog and gently roll the bike backward, stopping if there is too much rolling resistance (that means the chain is not going back on well). It should put the chain back on without bending the Luna eclipse chainring. .