Due to mounting pressure on the internet from articles like this one from Treehugger, The Storm Campaign have made a number of small but very important changes to their website that makes this bike’s specs far more believable. 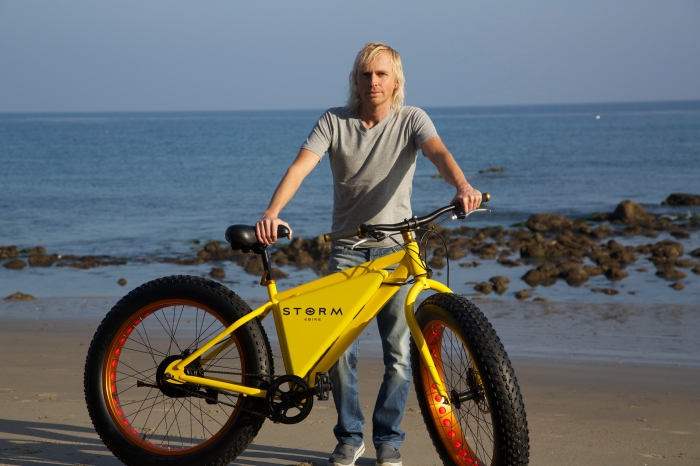 Is it a Real Bike or just a Dream?

1) They have changed the weight from 45lbs (alluding that it was the weight WITH the battery) to 55 lbs with the battery. This puts the bike firmly in the territory that I would expect it to be in with weight. Expect to be able to shave off a few pounds by swapping out the comfort seat and the tubes which are always much heavier than they need to be.

2) They have posted the technical specs for the battery. It is not 10Ah as originally claimed but a 8.8.Ah battery that can be charged at 4.4 Amps

This means that they are not charging the battery at 7Amps, but rather 4.4 which is in the realm of reality for these size/capacity cells. This puts the recharging time at around two hours (8.8 x 60 min / 4.4Amps = 120 min) although your batteries will last much longer on a standard charge mode which will take 5 hours for a complete charge.

It would be awesome to know the manufacturer and model of the cells being used in this pack, as that will have a large impact on the performance of the bike over time. ‘Li18650’ tells us nothing about the battery except the size/form factor (It’s like saying AA or AAA size). In this price range I would expect them to be ‘noname’ cells, but if they are panasonic or samsung cells, they should advertise them as such.

3) They changed the ‘Direct Drive’ motor to a 350W ‘Geared Hub’ motor. This is what we are seeing in the pictures of the demo bike and this is the motor that makes the MOST sense for this bike. You will get way more power on the hills with a geared hub and also depending on the winding you can have a higher top speed. Will the top speed be 20mph? With a 170lb rider with no wind on level ground, probably not, but it will be awfully close.

The only new problem that they have is that they are claiming the motor to be a 350W motor, but in reality it will really only be getting about 316 watts since the BMS is going to limit the continuous discharge current to 8.8 Amps. What does that mean? You can get over 316 Watts, but only when the pack is fresh and you won’t be able to get it for long. This motor is going to have serious trouble on long hills if people just keep the throttle cranked all the way down. I would expect the motor to overheat in less than 30 minutes of full throttle going uphill. Geared hubs cannot shed heat the way Direct Drive motors can and Storm would be wise to have the factory install a thermal cutoff inside these motors to protect them from overheating & abuse otherwise I predict a lot of fried motors. If that is too much to ask, a $5 aquarium thermometer with the probe stuck inside the hub casing would work too.

The motor they have settled on looks to be the 350W Bafang/8fun unit which is a very reliable unit with millions of units in operation in China. This motor can be gotten for <$70 in quantity (not including shipping).

4) They added the following statement about Storm/Ivars Sonders

“Storm Sondors is a humble man with much success in his life that not many know about… Storm lives a simple life, enjoys the outdoors, the ocean, traveling but an off the grid in a sense lifestyle. Not much for computers or cell phones…just the great outdoors.”

They also added a link to his Indiegogo account at the end of the campaign along with a button to contact him. This explains his lack of web presence as well as his philosophy on life.

5) They made some changes to the range description. It now reads

20 Miles is still high, but within the realm of reason for what they are selling. Most people will get closer to 15 miles or less but I can see how lighter riders might get 20 miles if they pedal hard enough and drive the bike slow enough (<10mph). Most people will just get on the bike and hit the throttle and not pedal at all, getting around 10miles of range depending on the tire pressure.

These 6 changes are enough to make me go from thinking that there is a very high chance for fraud to thinking that there is a very low chance for fraud on this campaign. If they were trying to rip off $3,000,000 from 4000 good natured people I can’t see why they would go through the bother of actually posting accurate information as a way to respond to the naysayers. The reality is they already have all of your money and they are not under any obligation to give any of it back for any reason at all.

They have also created a demo day for people that are interested in trying the bike. Although they had to cap the attendance because too many people wanted to come to see the bike, they have assured us that there will be several other demo days in the coming weeks in California. The fact that they are allowing the public to demo their bike BEFORE the campaign ends speaks very well for them.

There has been some speculation that that I am somehow affiliated with Storm\Ivars or I know Storm\Ivars or Jon personally. That is simply not true, if it were I would not have pointed out all the inconsistencies with their original campaign here. I am an Electric Fatbike Geek who really wants to see this campaign succeed. I hope to meet both Storm and Jon at some point before I die and shake their hands and congratulate them on a job well done (assuming they don’t take the money and run). I feel that their original representation of the bike was not malicious, just inaccurate. I’m sure that everyone wishes that the information from the very beginning was correct and accurate, but well here we are. It’s time to just move forward.

Keep up the more honest and accurate marketing Storm\Ivars. I look forward to seeing the outcome. What you are doing is extremely important to the world.