My milkshake brings all the boys to the yard

Two BBSHDs are on their way to my house in the NY boonies from China by airmail. I’m left to ponder how much awesome it’s going to be to be the first person in the US with a production (not prototype) BBSHD mounted on a fat bike. I also know how much their 558g 46T stamped steel chainring is going to suck. Luckily for me there are several chainring adapters that are not available for sale yet, but soon will be. I hope to get my grubby mitts on all of them at some point for testing purposes.

Chris and Legrand at Lectric Cycles are the biggest dealer of the BBS02 branded e-RAD system in the US. It would only make sense that they would have a chainring adapter tested and ready for their BBSHD units when they arrive at the end of November. The BCD130 adapter is machined out of aluminum and should be much lighter than the stock steel chainring that will ship with the BBSHD. Mated with a Race Face cx-Single Narrow\Wide Chainring your unintentional chain derailment issues should be non-existent. The Race Face chainrings are available in 40T,42T and 44T sizes which you can select as an option at checkout. You will not be able to get the stock steel chainring with the BBSHD with the e-Rad system, which honestly is a really good thing. Lectric is the only dealer in the US to sell the BBSHD with a built-in automatic shift sensor and I suspect it will work every bit as well as their setup on the BBS02 system.  The cost of the chainring adapter and the Raceface chainring is included in the price of the e-RAD drive system which is $1195. Their BBSHD was recently reviewed by Court Rye of electricbikereview.com on an Origin 8 fat bike and the video is here.

The BBS02 specific Lekkie Bling Ring will not work properly with the BBSHD, but don’t despair. I have been assured that by Christmas one should appear. Lekkie chainrings can be bought stateside through Matt at Empowered cycles, Doug at California e-bike or across the pond from Paul at em3ev.com, the only Chinese vendor I ever recommend. Paul also has setup a page to preorder the BBSHD through him for $699 located here which lists the Bling Ring as a $70 add on option. Stay tuned for more information on the Lekkie as soon as I get it. I will also be testing and reviewing it for your pleasure.

Eric at Lunacycle.com has several hundred BBSHD drive units in transit by air to their shop in California that he is preselling for $799 here. Eric has been hard at work designing both a BCD110 chainring adapter and a chainring that is similar to the Lekkie Bling-Ring but with even more dramatic chain line offsets to compensate for the bigger motor housing. The chainring will be anodized and it should be much lighter than the stock steel chainring. Lunacycle.com really came out of nowhere and in only 3 months Eric has built his business into a major player in the ebike market by selling batteries and drive units at Chinese prices directly to US buyers. It’s safe to say that Eric’s heart and soul has been consumed with ebikes for almost a decade now, and it shows with his website electricbike.com . Driving that obsession now is his belief that the BBSHD & Dolphin \ Waterbottle packs are going to be ‘The next big thing’. He has taken cheap Chinese cases and packed them with top quality NON-Chinese cells and BMS’s that don’t totally suck. His Monster Pack Extreme has a 100Amp continuous BMS at 60V giving you 6000W nominal and 10000W bursts of power which is way more than you would ever need with a BBSHD. I’ve stripped his triangle packs apart and can say that the construction quality is top-notch, they might even be able to survive my aggressive riding style. When shopping for a pack for the BBSHD I strongly recommend a 52v pack (14s) with a 30Amp continuous or better BMS.

His chainring design is machined to be light and strong and also to move the chain line as close to the bike as you can get without a prescription. The chainring may ship with spacers which will allow you to move the chainring away from the bike to clear intrusive chainstays on the fattest of fatbikes. I’m building a Snowshoe 2XL fatbike out of a FB 5 2.0 which will have massive 5.5 inch wide tires. This is one of only 3 frames that I can find that will fit a tire this wide in it, the other 2 being the heavy steel Lurch and the Salsa Blackborow. You can email subscribe on the right to see the build thread in the coming weeks or just go out and buy your own damn electric fatbike and build one up yourself. A 5.5″ wide tire 1500 Watt peak middrive fatbike running ghetto tubeless at 5 psi on 100mm rims is going to be able to plow through snow that I couldn’t even dream of riding in with any of my other fat bikes.

This ring is 1/2 way done, flip it over and then you mill the other side. It’s truly a work of art.

The Lunacycle chain ring will have to be machined out of a huge block of aluminum and will probably cost around $120 each or so. My feeling is that it will be worth every penny and will probably save 300g or more off the weight of your bike when compared with the stock steel POS chainring. Notice that it will be narrow\wide like the Lekkie and have lots of cutouts and holes to save weight but still have enough material to be strong enough to take hits on logs. Lunacycles settled on a 42T design which is the smallest chainring you can get and still clear the motor housing. I expect that with a 36T cog in the rear you’ll be able to climb anything with the BBSHD. 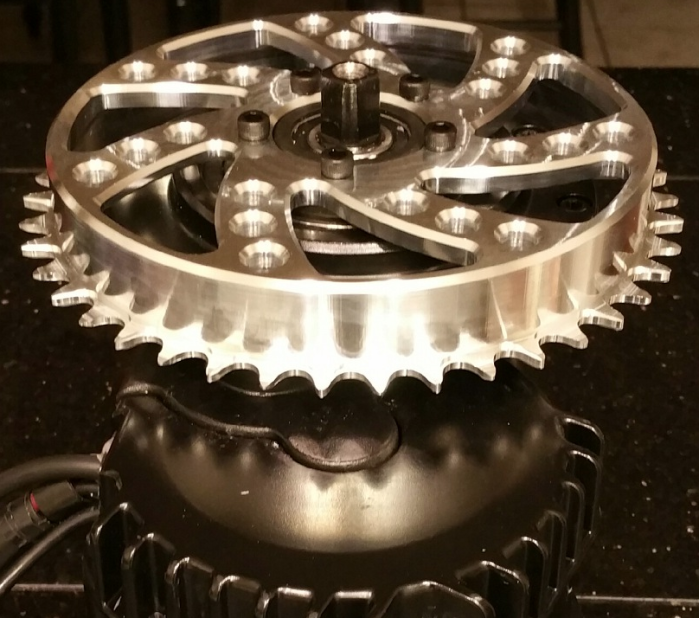 You can get see how massive the offset of the Lunacycle chainwheel is, they leave a lot of material to make it stronger

The upcoming Lunacycle BCD110 adapter (not shown) will be able to mount chainrings that are a little smaller than you can mount on a BCD130 adapter. The Raceface website shows cx-single chainwheels have a 38T BCD Narrow\wide chainring that will probably be the smallest chain wheel you’re going to be able to squeeze on this drive unit due to clearance issues. What size chainwheel are you going to want for trail riding? My feeling is that smaller is always better until you hit about 36T. Most of my trail riding fat bikes currently run a 34T chainring, but I don’t have many problems with the 36T and 38T chainring units and I can even make the 42T Lekkie work pretty well if I have a 36T cog in the rear. There is more info on BBS02 chainring selection in this article and most of the information given there will apply to the BBSHD. Just remember that that none of the BBS02 adapters will work on the BBSHD. Proper chainring size selection is critical to maximizing your enjoyment of these drive units. For singletrack trailriding smaller is better, for higher top speeds and commuting a bigger ring is better. Keep in mind that the size of the wheel makes a huge difference and most of the bikes my drive units are mounted on have 26-inch fat bike tires which are really closer to a normal 29er tire in rolling diameter due to the extra wide tires.

So which chainring adapter or custom chainring is going to be the best? For the 750W BBS02 the winner is the Lekkie Bling-Ring hands down, although a chainring adapter with a Raceface narrow\wide works pretty darn well too. For the BBSHD, only time will tell. There is only one real certainty and that is that you won’t want to use the crappy toothed 558g paperweight that Bafang ships you from China.