I’ve been friends with Roshan of Biktrix since way back when he started the first Kickstarter campaign for the Juggernaut almost a whole year ago. Our friendship has grown over the months, mostly because he is the only one who will ever return my emails. Roshan is one of us, a builder and innovator who wants to move the ebike industry forward in a big way. He designed his own 100mm conversion kit for the BBS02 which I have been hammering on every day for the last 2 months on my Dark Matter build without any issues. That never happens.

Ahhh, my eyes. Too bright. Make it stop.

There is no shortage of BBS02 conversions in the states, but as far as I know Biktrix is the only company who is importing and reselling Chinese built bikes with the BBS02 already attached from Canada. Roshan worked with the Chinese factory to integrate the standard 68mm BB 750W BBS02 into a custom aluminum framed 4″ tire fat bike. Normally when you have a bike supplier you want to keep it a secret from everyone else, because otherwise they will steal your product and sell it under their own product name for a cheaper price. Unbeknownst to Roshan I actually know who his supplier is, because I pretended that I actually had money and inquired into all the BBS02 electric fat bike manufacturers in China (there are only a few). They were happy to tell us about their connection with Biktrix and send me lots of pictures of his bikes in production behind his back. I was going to steal his invention and relabel it the “Juggle-Not” and market it to people who were not coordinated enough to juggle. Little did the Chinese know that I actually spend my days pushing a shopping cart and collecting soda cans to support my e-bike addiction. Needless to say, the deal fell through and Roshan and I stayed friends (true story). 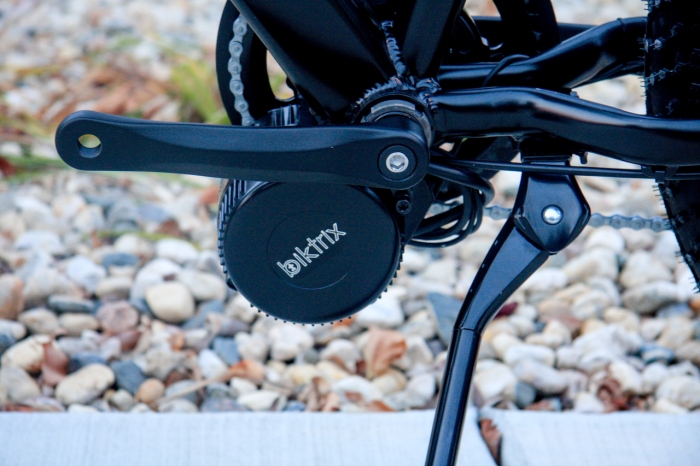 I like the logo, not crazy about how low it hangs (udder) or the stock Bafang chain wheel. Is that a real kickstand? So jealous. Biktrix is also the only bike in the world to feature invisible pedals.

How can I recommend this bike if Roshan is too cheap and way too smart to ship me one to test? It’s pretty simple, his setup for the 2016 Juggernaut is pretty much exactly the same as most of my other ebike builds. The components might be a little different, and the tires and geometry might be off, but the bottom line is that nothing that I’ve found yet rides quite as awesome as a BBS02 750W aluminum framed fat bike. I also can say that their old crappy 2015 model rated a 9.5 out of 10 in a review located here by Court Rye from electricbikereview.com and Court is always right. I tried to read the review but kind of lost interest half way through, you should read it and tell me what I missed.

The C963 display replaces the other displays from earlier versions. It has an adjustable stem and handlebar height.

Who is this bike perfect for?

Fancy pretty cells all lined up in a row. Where is all the ugly nickel spot welded strips? What madness is this? Must have.

Grab your wife’s credit card while she’s sleeping and click here to buy one for her. She’ll love it. I will never buy this bike and I’ll probably never even ride this bike because no one in their right mind would EVER let me ride their ebike. That being said it is the only factory electric fat bike that I’ve seen on the market to date that is actually worth risking jail time to steal.

9 thoughts on “Biktrix Juggernaut 2016 : The Only Factory-Built Electric Fat Bike In Existence Worth Stealing”