Daryl from Lekkie sent me a production BBSHD Bling Ring last week that I tested on my Phat Phuk build. Like the original Lekkie Bling ring for the BBS02, the BBSHD Bling Ring did not disappoint. Incredibly durable, the 42 tooth Bling Ring is machined from 7075 Aluminium and T6 hardened for long life and then the final product is anodized red or black. The narrow/wide tooth pattern help to prevent annoying unintentional chain derailment issues and also dramatically decreases tooth wear. Our favorite Aussie Speed Freak Bruno threw a BBS02 Lekkie ring on a heavy cargo bike and made this video examining it after beating on it for whopping 6000km. This should give you some idea of how much use you’re going to get out of this ring before you have to replace it (it’s almost as hard as steel). I’ve used 2 Lekkie Bling rings on several of my BBS02 builds and they have never given me any cause for complaint. The BBSHD Lekkie Bling Ring was everything I thought it would be and more. It’s relatively inexpensive, lighter than any other 42T Bafang chainring out there and it worked flawlessly during my testing. 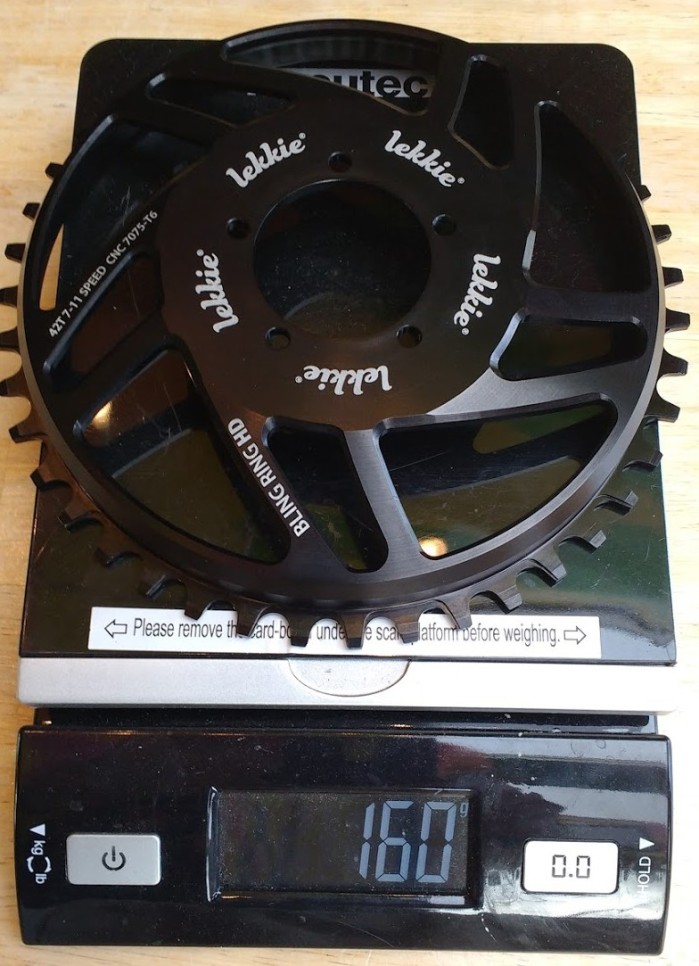 At 160g the Lekkie Bling Ring is the lightest aftermarket chainring around to date.

I had some trouble getting the Lekkie Bling Ring to mount properly on my enormous 5.05″ actual width Snowshoe 2XL tired Phat Phuk. In order to get the chainring to clear my intrusive chainstay I had to space it out about 3.25mm but that was nowhere near enough to clear the tire. The tiny M5 bolts that come with the BBSHD were nowhere near long enough to space out any more than that. After a trip to Lowes I grabbed some stainless steel metric 16mm long M5 hex bolts for about $5. This allowed my to space out the chainring a massive 6.5mm which is about as far as you’re going to get without the M5 bolts hitting the crank arm. If you need more offset you can either grind down the crankarm so the M5 bolts don’t hit or you can shift the entire drive unit toward the drive side using a spacer on the axle of the BBSHD against the BB on the drive side (instructions here). The first option will be a lot less work and is what I recommend. Lekkie will be producing 2mm spacers for the chainring in the near future, if you need more than 2mm of spacing then you will just need to stack them. If you need more than 4mm of spacing then you will need longer M5 screws than what ships with the BBSHD. The Luna Eclipse ring has .8mm more offset toward the bike than the Lekkie Bling Ring although if you look at the rings side by side the offset looks to be much greater since the Lekkie ring is much thinner where it mounts to the drive unit.

Lekkie Bling Ring next to the Lunacycle Eclipse ring. The Lekkie has much smaller teeth but about the same massive offset that you will want.

Because I didn’t have a BBSHD spacer I had to fashion one myself. The bolts are very close to the protruding center hub so if you want to use washers then you will need to grind one side of them down with a grinder. I use vice grips to hold the washer then grind them down, I had to use 20 washers to get it spaced out far enough to clear the tire for a total of 6.5 mm of spacing. In order to mount the wheel you will need a small platform to hold all the screws in and then set it on the table and line up the washers so the flat part is toward the center. Use a hot glue craft gun to glue the washers so that their orientation won’t change when you try to mount it. Then lift up the platform with the chain wheel so your bolts don’t fall off and gently mount the chain wheel by threading each bolt a few turns being careful not to bump the washers enough to dislodge the glue. It’s important to not get any glue on the top of the washer where it might make the chain wheel crooked and also to make sure there is no metal shavings on the sides of the ground down washers that will do the same thing. I used a mat knife to cut off the metal flakes that clung to the washer after grinding.

Craft glue has thousands of uses, be smart and just buy a BBSHD spacer if you have a >4″ tire or an intrusive chainstay.

The bolt patterns on the BBSHD and BBS02 are completely incompatible so make sure you buy the right Bling Ring for the drive unit you have. Bafang geared the BBSHD way too high by shipping it with a 46T chainring. The 42T Lekkie chainring is much better for single track trail riding. There are some crazy new 10 speed cassettes that have 42T grannies like the Sunrace CS-MX3 for $68 which is a 10-speed cassette that has a whopping 42T granny (the thing is insanely huge). I’ll be testing this cassette with the Phat Phuk next week and will hopefully have a review posted soon. I think that the 42T Lekkie and a 42T cog should be an awesome combo for the BBSHD that will climb almost any incline with ease and still have tons of torque. This is a much better (and cheaper) option than going for a Wolftooth 42T granny and throwing it on a normal cassette like many people have done.

If you use the Lekkie with a single speed setup you really must use a chain tensioner. Otherwise if the chain comes off you will have a very hard time getting it back on without either loosening up the rear hub or bending the chain wheel due to the massive offset of the Lekkie ring. 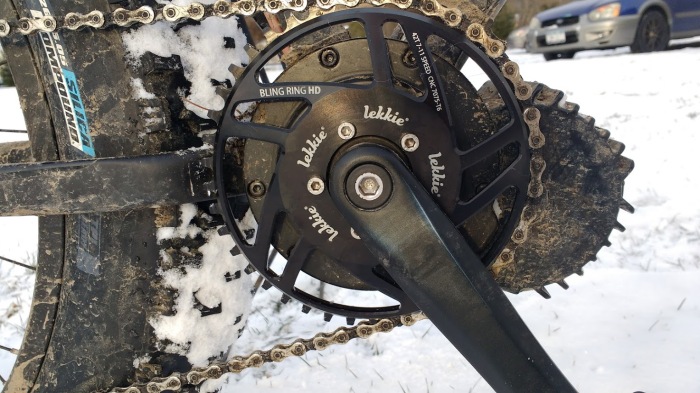 I have no complaints about the new Lekkie BBSHD Bling Ring except that it needs a factory spacer to ease install. I bought that Subaru in the background for $300 and it’s newer than any of my other 4 cars.

As of right now there is no one who is selling a BCD adapter for the BBSHD, although I suspect there will be soon. Due to the way the BBSHD is designed any BCD104 adapter is going to have a really bad chainline, so dealers may settle on making BCD110 chainring adapters only. If you have a BBSHD then right now you currently only have 3 options.

Lekkie had access to the BBSHD CAD files to design their custom fitted chain ring with. Their hard work paid off.

It will be up to each BBSHD user to decide what chainring will work best for them, but one thing is for sure and that is that using the stock Bafang chainring for me is just not a viable option. Many weight weenies will often pay as much as $1 a GRAM to shave weight of their bikes and the weight difference between the steel chainring and the Lekkie is 398g which is almost an entire pound! I can only tolerate 20 minutes of the Brazilian Butt-lift workout video with my wife (true story) which only burns off a measly 144 calories. It takes 3000 calories to burn off just a pound off those love handles which means 6.94 hours of non-stop Brazilian Butt-lift to lose just one measly pound. Sounds like a special kind of hell reserved just for me. 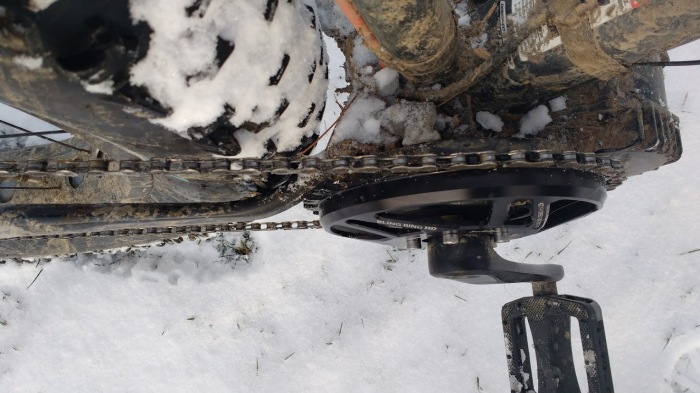 The chain clearance even with 6.5mm of offset was totally marginal, about 1.5mm of tire clearance and it still rubbed on the bottom chain in the biggest granny gear. This build is the fattest of the fatties and yours will not be this bad.

You can get the Lekkie Bling Ring from Paul at em3ev in China for about $95 + shipping here (the retail is $140, but who pays retail?). If you want to buy this ring stateside you can also get it from California e-bike, Empowered cycles and Lunacycle.com. For a full list of worldwide dealers & the full product details check out this link here. There are some crazy price wars going on between Paul and Eric right now and both have dropped the prices of their BBSHD drive units by hundreds of dollars. Paul is selling the BBSHD for $599 + $60 for a gear sensor + shipping from China to the US right here and Eric had dropped his price to $699 (w/out gear sensor) + US Ground shipping right here. When ebike vendors go batsh!t crazy and battle for the cheapest prices, the consumer always wins. There has never been a better time to buy a BBSHD and although my initial impressions of this drive unit were left wanting, I have to admit it has really grown on me. I actually find it hard to go back to using my BBS02 units. With a smaller 42T chainring like the Lekkie Bling Ring the BBSHD really shines on singletrack and in soft sand, nothing else on the market right now really compares. 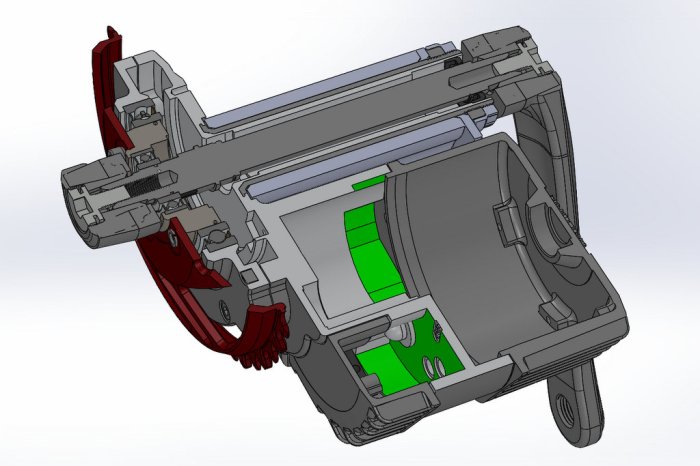 A beautiful cutaway? Dude where did my motor and the innards go? So pretty.

Lekkie is currently looking for dealers in Europe and Canada so contact them here if you’re interested.

So should you spring for a Lekkie Bling Ring? If you have a BBSHD getting an aftermarket chainring is not optional, it’s mandatory. If you can suffer through riding with the 46T monster metal doorstop that Bafang is trying to push on you then you are a better man (or woman) than I.

No animals were harmed in the testing of this chainring.

That is an awfully clean chainring mounted on an absolutely filthy bike. The cleanliness won’t last I assure you.

Disclaimer: I did not pay for the Lekkie chainring that was sent to me but I felt like I really deserved it and that it in no way influenced this review (yeah right, I’m an unforgiving e-bike parts whore). I figured that I didn’t ask for any free stuff, Daryl just offered and sent it which makes everything all alright. (Yes, I am a freeloading degenerate scumbag, so what?)