Since 15 electric bikes for one person is just not enough, I bought just one more to add to my collection. The newest version of the Deadeye Monster single speed from Bikesdirect ships with fancy 80mm rims (instead of 50mm), 135mm front dropouts (instead of 100mm), 100mm bottom bracket (instead of 68mm) and Mission Command 4 Vee Rubber tires (instead of Mission 4’s). Although these tires are a whole lot better than their predecessor, the Mission 4 tires, they still leave a lot to be desired. The Mission Command 4 tires have a deeper tread and a slightly different tread pattern than the Mission 4. Unfortudently the new command tires do a lot of things marginally well, but do not excel in any area. Although I would NOT take a brand new Mission 4 tire if someone wanted to give me one for free, I probably WOULD take a Mission Command 4 tire, as long as it was totally free (no sexual favors involved either). 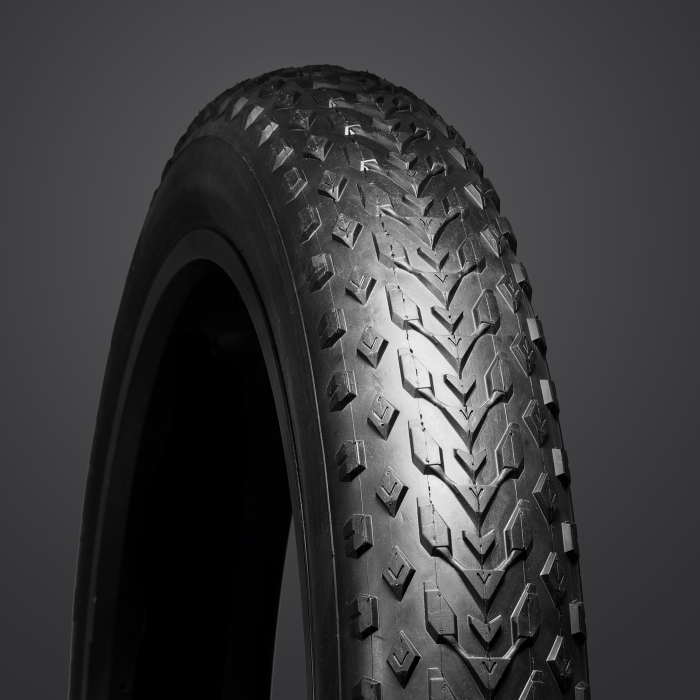 This is probably the coolest tread pattern I’ve seen on a fat bike tire, too bad it still sucks.

The Mission Command 4 tires I tested were the 72tpi wire bead versions installed with ultralight qtubes on a Deadeye Monster with a 3000W Cyclone kit. This new build is called ‘The Dark Side’ and sports a Nuvinci old school N171 with a 36T crank and a 18T cog. It was designed as a crossover ebike which would do well in the woods as well as a commuter. I’ve tested it pretty extensively both in the woods and on the highway at a variety of different tire pressures. 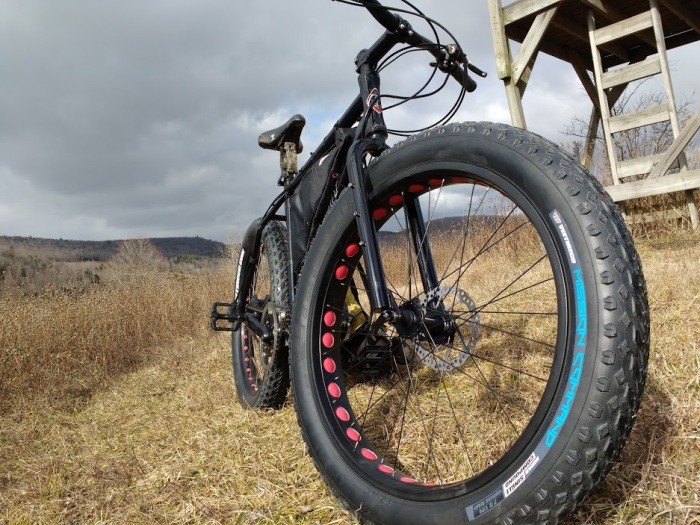 On the right is the tower that I sleep on at night under the stars. It’s about 1/4 mile from my house on the top of a huge hill overlooking a pretty sweet valley. Living the dream, baby.

At low pressure and high speeds these tires have a horrendous amount of self-steer. If you ride them on the highway then you will want to pump them to 20 psi or even higher. In the woods the traction is better than the Mission 4, but still not as good as I would like. The gold standard for cheap-ass tires that have tons of traction are the 120TPI folding bead Panaracer Fat B Nimble, which is the tire I wish these cheap-ass fat bikes shipped with. I suspect that at wholesale the Mission Command 4 and the Fat B Nimble are both about the same price. The Mission Command is a very common OEM tire so maybe they are a little cheaper seeing as they are only 72TPI and wire bead (yuk). 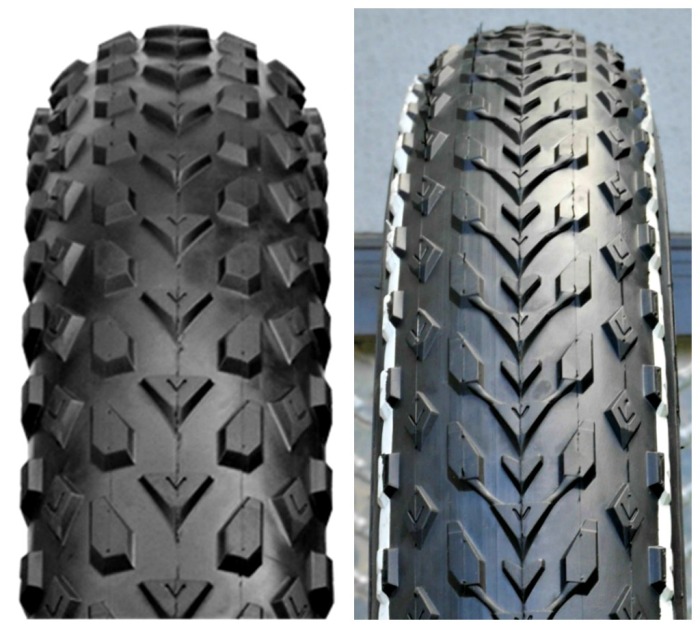 Mission 4 on the left and Mission Command 4 on the right. You can’t pretty up a pig.

Powder – 3 : Not the worst tire ever in the snow, but not really that great either.

Ice – 3 : Better than the Mission 4, but if you’re going to be on ice then you better get some chains.

Singletrack – 3.5 : It does passably well, but does not stand out in a crowd. Performed better than I expected it to, but considering the performance of the Mission 4, my expectations were pretty low to begin with.

Road – 3.5 : Decent road tire if you don’t mind the self-steer which feels pretty funny at over 15mph. Not funny like the two old guys up in the balcony of the Muppet Show either, funny like ‘holy sh!t this ebike is going to kill me’ funny.

Rolling Resistance – 3.5 : About what you’d expect, maybe a little more.

Weight – 3 : Claimed 1640g, ouch. Too lazy to take my tires off to weigh them. If they were going to lie they’d probably pick a lower number. 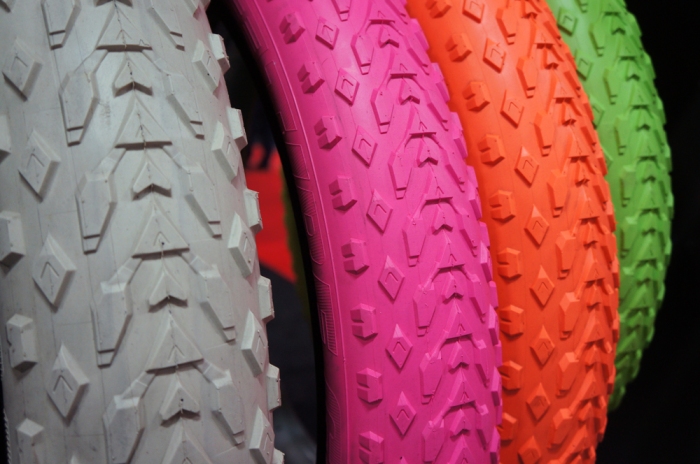 Comes in a rainbow of fruity flavors, kind of like Unicorn poo.

Fat-bike.com rated this tire 4.5 gnomes, but I would not (I don’t really rate things by gnomes because I’m just not that cool). For a tire that comes free with the bike, it is what it is, but it’s not anything I would go out of my way to get or use. The retail on this tire is $90 which is a bad joke that you’re the butt of, if you actually buy one at that price.

I’m not sure why it is so hard for these tire companies to produce a decent fat bike tire. It’s pretty simple really, just copy the Surly Bud and Lou. Bam, you’re done. Sell it for < $50 for a 120tpi version and you’d make a killing, just don’t forget my cut for the idea.