I’ve built a couple of AWD fatbikes out of my Boris X9 donorbike that I bought for $700 on BikeIsland.com, all have been something of a disappointment. I have to admit that this current build firmly joins my other AWD builds in the ‘disappointing’ category. It is a startling contrast to have a MAC motor and a BBS02 on the same bike with separate throttles and be able to switch back and forth in real-time between the two motors. While the front wheel motor is useful when the bike bogs down in deep snow and gets stuck, most of the time it is just 10 lbs of dead weight getting carried around. When you use the front Mac motor going up hills it only increases your speed 1-2mph at most although it does take a lot of load off the BBS02. With a 32-34T front crank gear you hardly need it as you can peg the throttle and keep 1000 watts pouring into the BBS02 all day as long as it is spinning fast and it doesn’t seem to mind. The controller fries when you keep the 42T-48T ring that it ships from Bafang with instead of replacing it with a BCD104 adapter and steel chain-ring that is more appropriate for trailriding (32-34T).

The Reaper is not very stealthy with that giant 12T Mac front hub motor and an exposed controller.

The biggest problem is that when running the front motor you massively increase your power consumption for a marginal increase in power and traction. The BBS02 drivetrain stand on its own and the Mac cannot compete at comparable power levels. With the Mac motor you have to make decisions about what power level to set it at, I used a 6FET controller from Edward Lyen that is set at 25 Amps. The Mac is a normal (not FatMac) rear hub mounted on the front wheel. The 135mm spacing is perfect and it lines up pretty well.

Dr Bass (from ES) epoxied Torque Arms are way more sexy than most other Torque arms are. Nothing screams ‘cheapskate’ like hose-clamps on the front forks. Notice how I had to ground it down to fit around the front fork.

You can run the Mac motor all day at 25 Amps without any real risk of it overheating or burning out the clutch. Once you start dumping 30-40 Amps into it you have to pay attention to the motor temps. Who really wants to do that? Since most of the time you are dumping power into the front hub motor when it is stuck and can’t turn, that is essentially the WORST time to be putting lots of power into the motor because all you do when the motor can’t spin is create a whole lot of heat. 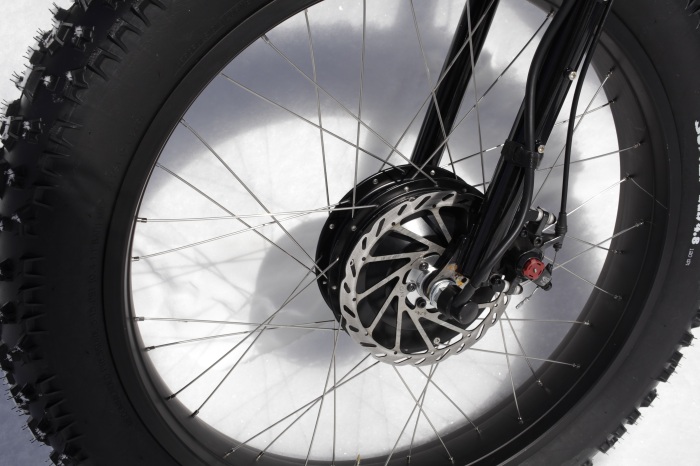 The front wheel build took several tries to get right.

The Boris X9 is a nice frame with low stand-over height which is incredibly useful when riding on packed down XC ski trails with 2 feet of powder on either side. I liked being able to dismount the bike and find footing without ramming my crotch on the top-tube and then falling over every time (this happens a lot with my other 2 fatbikes). 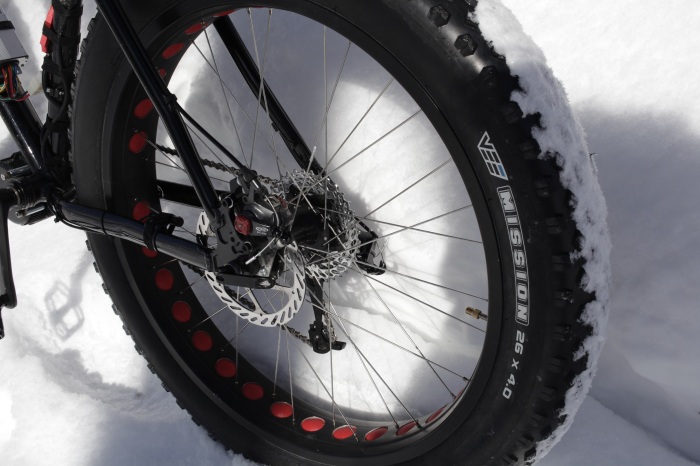 Avid B7’s are stock with the Boris X9. This is the first bike I tried with the BB7’s, now it’s all I use.

Unfortudently the X9 also ships with a 10 speed cassette and derailleur. The X9 is the only bike I’ve had trouble with broken chains on (with the BBS02), and I expect if you make the mistake of shifting under load you’ll have a few snapped chains as well. I highly recommend carrying around SRAM PowerLinks around with you when you ride as they will save a lot of time fixing chains and only cost a few dollars each.  Make sure your power links are the right size for your chains. My personal feeling is that 7-8 speeds are ideal for the BBS02 if the front chain-ring is sized correctly and the largest cog on the cassette is 32T or bigger. Some cassettes have cogs as big as 36T which I highly recommend.

I kept the front derailer on as a chain guard to keep the chain from slipping off and jamming up between the chainring and the BBS02. It works pretty well.

While my initial ideas about the importance of AWD on a snow bike were wrong, it took me several AWD builds to realize this. From this point I plan on experimenting with the use of skis to keep the bike from sinking down in deep powder and for the most part will probably totally give up on AWD. In my opinion Hub motors have no place on bikes designed for the snow, mid drives are the only way to go. You spend most of your time moving at 5mph or less and powering through powder will cause a lot of trouble with any hub motor I’ve seen on the market. The fat bike tire diameter is too big and the gearing is not enough to power these tires through hardly any snow at all. The best build I’ve done yet is my $900 ‘Sun Kiss’ DIY 42lb conversion found here out of a Deadeye Monster that takes about 4 hours start to finish.

Lyen 6Fet Controller is pretty Ho-Hum at 50v/25Amps. You need to put a lot more power in this hub motor to get it to sing.

You will need to mount a 100mm axle on the BBS02 to get it to work with the Boris X9. More on that here.

Instructions for installing a BBS02 are here. 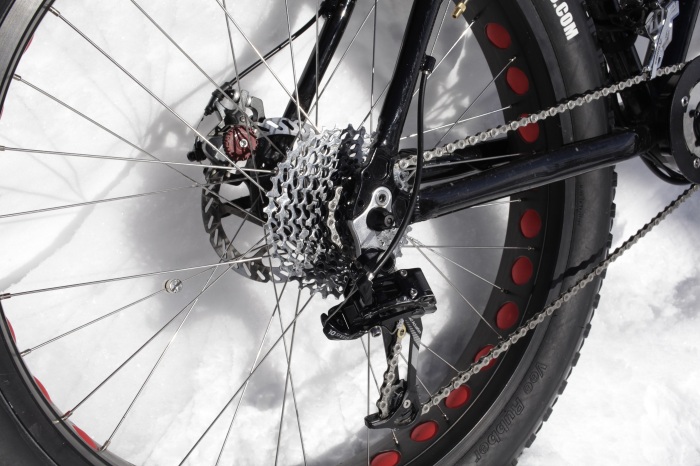 The 10 speed with the super skinny chain is sub-optimal. X9 Derailleur tends to loosen up and needs locktite on the main mounting bolt\derailer hanger.

I cried like a newborn baby when I weighed this beast. Then the scale broke and it crushed my foot.